There’s a new push at the State Capitol to give health care workers emergency paid leave during the COVID-19 pandemic.

DFL lawmakers have introduced bills in both the Minnesota House and Senate, which would provide up to 100 hours of leave to full-time critical sector workers.

She hasn’t tested positive for COVID-19 yet but said she’s been forced to quarantine due to exposure at work.

“I am nervous about the day it is [positive] because my PTO is dwindling,” Buchanan said. 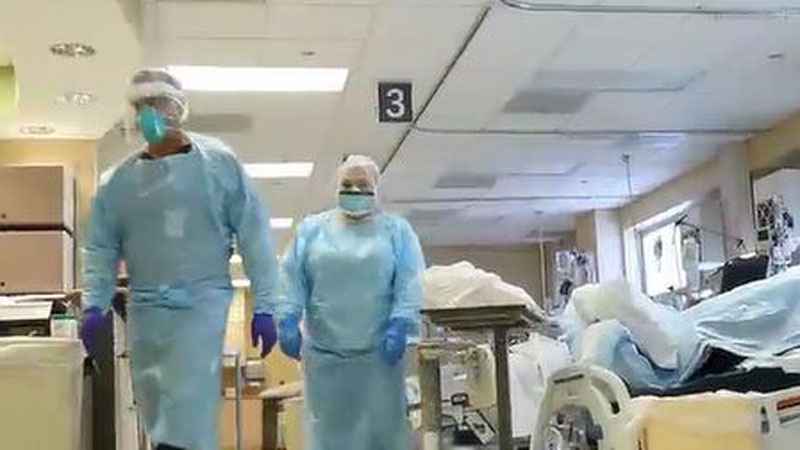 During a press conference on Thursday, she said she’s dealt with exposures both on the job and at home. She also had to take time away from work while her children were doing distance learning.

“I have personally lost over 84 hours of personal time [off] and that’s more than a full-time paycheck for me,” Buchanan said. “Losing that much income is emotionally, mentally, physically and financially exhausting.”

She joined other essential workers to advocate for the emergency paid leave legislation.

“Over the course of this pandemic, front-line workers across countless industries have put their safety on the line to do the essential work and keep Minnesota moving,” Bill McCarthy, president of the Minnesota AFL-CIO, said. “We owe these workers a debt of gratitude but, unfortunately, many are being punished for doing the right thing to preserve public health. They’re losing pay and sick time to quarantine for possible exposure, to care for COVID positive family members or themselves, to care for children in distance learning or while waiting for test results.”

The legislation would provide paid leave to workers who qualify for a crucial sector exemption under Executive Order 20-48, who cannot work from home, and who are not receiving other state and federal benefits that compensate them for the time they’re unable to work.

It would cover health care workers, first responders, food workers and others.

House lawmakers held a hearing this week on the bill in the House Labor, Industry, Veterans and Military Affairs Finance and Policy Committee.

Author of the House bill, Rep. Cedrick Frazier, DFL-New Hope, said he’s been speaking with front-line workers, including those that work at long-term care facilities.

“There were workers that were hesitant to identify they had symptoms of COVID because they did not have the provisions in place to take time off,” Frazier said. “This bill is by no means meant to punish those employers who did the right thing. The idea is to capture and take care of those who were not taken care of.”

The legislation would also offer part-time workers some leave through a formula explained in the bill.

It could be used if the employee, or someone they take care of, is isolating due to symptoms or quarantining due to exposure. Employees could also apply for the paid leave if their child’s school or daycare is closed due to COVID-19 precautions.

“I think that’s a mistake, very costly to businesses,” said Rep. Joe McDonald (R-Delano). “Not to mention, it’s such a broad scope. “Who all qualifies under your bill?”

“This is a financial burden on them, they are struggling with a limited budget,” he said. “I have heard from our nursing homes, long-term care folks here that this could devastate them.”

Others raised concerns about the cost of the program as well.

“We may have to make a decision, based on the amount of money available, which of the essential workers we’ll be able to help,” said Rep. Bob Dettmer, R-Forest Lake.

Kimber Wraalstad, administrator at North Shore Hospital, estimates an additional 100 hours of paid leave for all of their employees would cost them more than $525,000.

Wraalstad also spoke on behalf of the Minnesota Hospital Association, voicing concern about the retroactive application.

“In the past 10 months, rates of pay have changed, vacation, sick or PTO time have been used,” she said. “In addition, the potential tax implications for earnings from early 2020 being paid in 2021 are mind-boggling.”

Those on the front lines told lawmakers the pandemic continues to cost them earnings.

“I have been tested six times,” said Ashley Haverland, a registered nurse. “I work 12-hour shifts and that meant if I missed three days of work, I would have to use 32 hours of PTO while I quarantined responsibly.”

She works in an emergency room and said it can sometimes take days to get a test back.

“We’re running out [of days] and starting to go without pay and this leaves us to feel we have been failed by the systems that we provide care in,” she said. “We are tired, we are frustrated.”

Haverland said other nurses have allowed her to borrow time from them to cover the gaps.

“I have a 17-month-old son who attends daycare,” she said. “There have been three occurrences where I have had to miss work due to a daycare closure because they had an exposure or are waiting for a COVID test. How will I provide care for him when I only have five hours of banked time off right now?”

Gov. Tim Walz is also proposing emergency paid leave as part of his budget proposal. The governor is recommending up to 80 hours of paid time off for health care workers.