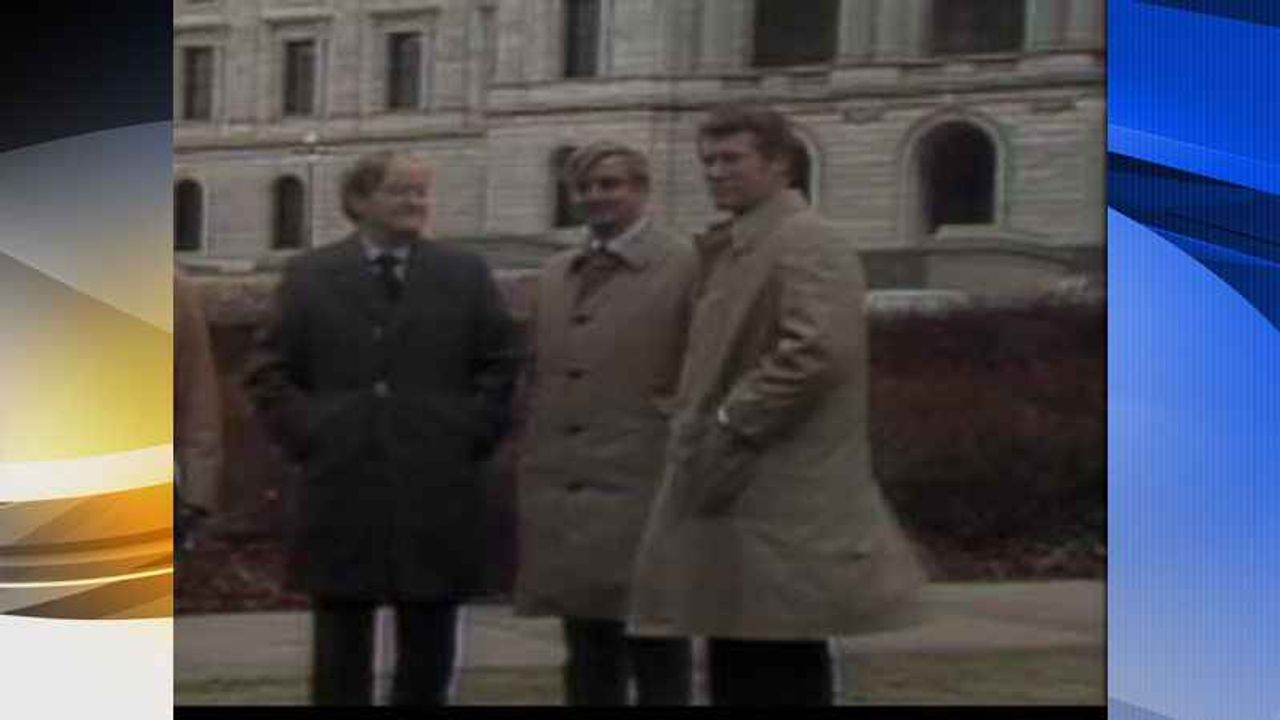 When Walter Mondale thinks back on Hubert Humphrey and Eugene McCarthy, he first remembers two Minnesota political icons whom he says represented the state strongly in the U.S. Senate in the late 1950s and early 1960s.

“Collectively, for a time, they were the most impressive Senatorial team in the country,” recalled Mondale of Humphrey, who was first elected to the Senate in 1948, and McCarthy, who was elected to join him there 10 years later.

“They were both such gifted politicians,” Mondale said. “Humphrey had all that energy behind him. And McCarthy was handsome, dignified and intelligent. He had all of those qualities.”

By 1968, though, Humphrey and McCarthy found themselves on opposing sides in a Democratic party badly divided over the issue of U.S. involvement in Vietnam.

Humphrey had been selected as former president Lyndon Johnson’s running mate in 1964, a position for which McCarthy had also been considered. When Johnson dramatically announced he would not seek another term in late March, 1968, the then-vice president entered the race with the backing of the administration and the party establishment.

McCarthy, meanwhile, had emerged as a vocal opponent of Johnson’s policies in Vietnam. His own 1968 presidential bid generated strong traction early on. He garnered around 42 percent of the vote and nearly upset Johnson in the New Hampshire primary.

Sen. Robert Kennedy of New York, himself a critic of Johnson on Vietnam, entered the race just days later. He and McCarthy battled against each other in the primaries. McCarthy bested Kennedy in Oregon, but lost in states like Indiana, Nebraska and California.

Yet Kennedy’s candidacy ended with his assassination on the night of his win in California on June 4, just two months after the assassination of Dr. Martin Luther King.

Humphrey did not enter the primaries, but worked to gain support in states where party leaders still decided delegate votes. He arrived in Chicago for the Democratic National Convention 50 years ago this week as the prohibitive favorite for the nomination.

Flashback Friday: Looking Back at the Death of Hubert Humphrey, a Minnesota Political Icon

Meanwhile, McCarthy arrived as the de-factor leader of the party’s anti-war wing.

The stage was set for turmoil.

What unfolded in the convention, and more importantly on the streets outside it, left the party badly wounded heading into the general election campaign against Republican Richard Nixon and independent George Wallace.

Anti-war protestors were met by police in what became a brawl captured by national television cameras. The schisms were evident inside the convention as well as where Connecticut Senator Abraham A. Ribicoff took to the podium to denounce the police tactics, and by extension, Chicago mayor and Democratic power broker Richard Daley.

“It was a horrible scene,” remembered Mondale, who had been appointed to take Humphrey’s place in the Senate, and was backing his candidacy. “Everything was blowing up. Humphrey got the nomination, but the party was badly divided. The chances of it coming back together at that point were only so-so.”

“On the streets, there was violence. Young people were speaking their minds, which they had every right to do. But things got out-of-hand and the police went too far. It was a really sad story. People on the streets were mad at Humphrey. They were mad at a lot of people. But he was certainly a target of their anger. So it was a difficult time.”

The divisions put a strain on Minnesota Democrats like Mondale, who knew, and had worked with, both candidates.

“I was just there trying to hold it all together, at least for Minnesota,” recalled Mondale, who went on to serve as vice president himself after being selected as Jimmy Carter’s running mate in 1976.

“I think we did it. But it was a difficult task.”

In the end, Humphrey gained the party’s nomination on the first ballot. Mondale said it was a “Pyrrhic victory” and the wounds lingered well into the fall.

“There were a lot of anti-Humphrey feelings that had developed, which was unfortunate,” said Metcalf, who still practices labor law in the Twin Cities. “Because he had been so good in a number of other areas. But the war was such an overwhelming issue back then. And he had been so tied to Johnson.”

McCarthy did not get around to endorsing Humphrey until October and then only in a lukewarm way, after Humphrey had already taken steps to distance himself from Johnson and the war.

Humphrey ended up losing to Nixon by a margin of just over 500,000 in the popular vote.

“If he had gotten a couple more days, he would have won,” Mondale said. “He had the momentum. And I believe it was a great tragedy of American history that it came out that way. Because I feel the Nixon presidency was really a negative force in American life.”

Mondale said events in Chicago played a big role in the eventual outcome of that year’s election.

“It was huge,” said Mondale, himself the Democratic candidate for president in 1984, falling to Ronald Reagan. “If it had been a decent convention, and Humphrey had come out of it with a reasonably united party behind him, I think he would have won. As it was, he barely lost under the most difficult circumstances. So you’d have to guess if the circumstances had been better, he would have done very well.”

Metcalf did not end up voting for Humphrey, though he said he definitely did not vote for Nixon either.

“Looking back with the benefit of hindsight, I probably would have held my nose and voted for Humphrey,” he said. “But back then, some of us just couldn’t bring ourselves around.”

McCarthy did not seek reelection to the Senate in 1970. Humphrey sought the DFL nomination and was elected to the seat in his place, returning to the body he’d left to become vice president in 1964.

He would again seek the presidency in 1972, losing the race for the Democratic nomination to South Dakota Sen. George McGovern, who carried just one state in his own campaign against Nixon.

McCarthy, himself, mounted several more increasingly long-shot presidential campaigns, the last of which came in 1992.

“They were respectful and cordial to each other (after 1968),” said Mondale, who added McCarthy had already seemed to be taking steps to separate from Humphrey even before Humphrey was picked as Johnson’s running mate in 1964. “But the personal relationship was gone. There was never again any real human connection between them. McCarthy was off in his own world after that, and Humphrey continued on in the Senate. But they were never again close.

“They had sort of tested each other in 1968 and the split was final after that.”