UPDATE: The chair of the Minnesota House Higher Education Committee is the latest state lawmaker to react to a 5 INVESTIGATES report that that uncovered at least $30,000 in personal expenses charged to the University of Minnesota by high-profile professor Aaron Doering over several years.

"I had the opportunity to meet the University’s new president last week and it’s my expectation that moving forward, the U will do better to make sure this doesn’t happen again. This will be one of President Gabel’s first moments to execute bold leadership- the kind Minnesotans deserve from our world-renowned higher education institution," Bernardy said.

(Read original reports on the spending uncovered by 5 INVESTIGATES below)

At least three state lawmakers Thursday called on the University of Minnesota to take additional action following a 5 INVESTIGATES report that uncovered at least $30,000 in personal expenses charged to the university by a high-profile professor over several years. 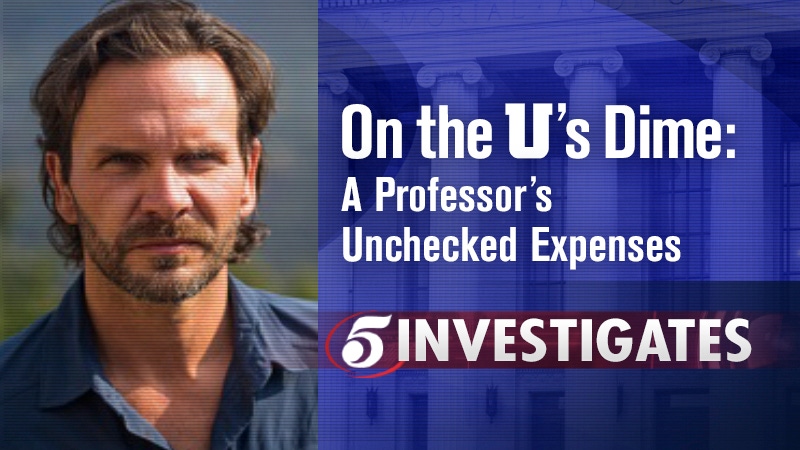 In June, Doering pleaded guilty to domestic assault, but remains on paid leave while he is serving his sentence at the Hennepin County Workhouse.

RELATED: On the university’s dime: A professor’s unchecked expenses

In a statement, Daudt wrote:

"There’s no reason someone who has defrauded the University and is serving time for domestic assault should be drawing a salary paid for by taxpayers and student tuition. If tenure policies prevent him from being fired immediately, then those policies should be changed by the Board of Regents."

Sen. Paul Anderson (R-Plymouth) echoed some of that sentiment as well.

"This is not a situation where people should be protected. They should be held accountable for their actions," Anderson said.

In an interview with 5 INVESTIGATES, Jean Quam, the dean of the College of Education and Human Development referred to the university’s tenure code when asked why Doering has remained on the payroll.

Quam also defended the University’s procedures for approving the expenses of faculty and staff who have university-issued credit cards.

"I can talk generally about receipts. If there’s a justification for them, if there’s receipts, if there’s a rationale about why … funding was spent on a particular item and the faculty member signs off on that as a legitimate expense, my expectation is that faculty is telling the truth," Quam said.

"You’ve got to go back and make sure these expense reports – people aren’t just signing off and saying, well we’re taking their word for it," Anderson responded.

In anticipation of the report by 5 INVESTIGATES, University of Minnesota President Joan Gabel sent an email to all faculty and staff on Tuesday afternoon with the subject line "holding ourselves accountable" and asked them to review the university’s expense policy.

"It only takes an instance or two of falling short to damage the public trust," Gabel wrote.

Now lawmakers are asking Gabel and the university to go a step further.

"If we say, all university employees who have a (purchasing) card, we’re going to look at all of your expenses and ask questions. If there’s nothing to hide, nobody should have a problem with that," said Rep. Jim Nash, (R-Waconia).

"The state does appropriate money for the university. You’re now accountable to the state. I want answers and I’m sure all 201 legislators are going to want answers as well," Nash said.

5 INVESTIGATES contacted supervisors at the Hennepin County Workhouse on Thursday to request another chance to speak with Doering about the expenses he filed with the university, but Doering declined.