Police in St. Louis Park are ordering landlords to evict people from their homes for reported criminal activity even though they were never convicted or charged with a crime, a 5 EYEWITNESS NEWS investigation has found.

City records show from 2013 to 2018, the police department directed landlords to terminate the leases of more than 225 tenants—an average of more than three evictions per month—for violating the city’s crime free/drug free ordinance.

Yet, a review of court records show more than 150 of those tenants—two out of every three—were never actually charged with a crime.

In one case from 2013, a woman was evicted after her then-fiancé was charged with assaulting a police officer.

The incident happened across the street from the Courtyard Apartments, where she lived at the time.

“The police told me I wasn’t in any trouble,” Nicole Simonette said. “They didn’t handcuff me or anything.” 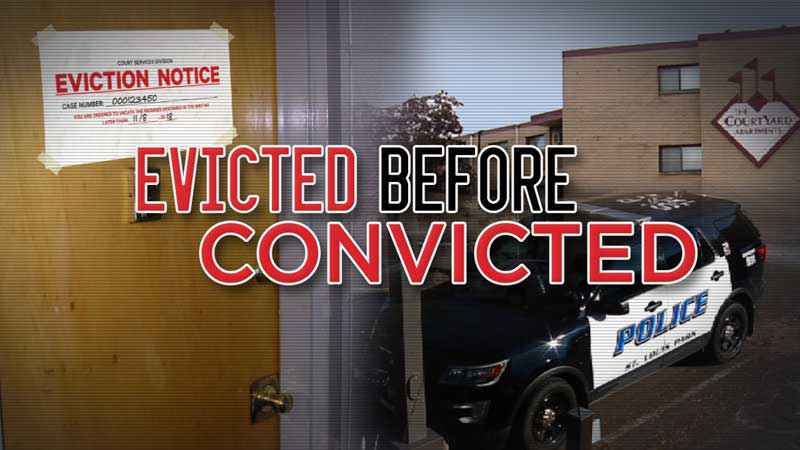 Two weeks later, police ordered Simonette’s landlord to terminate her lease, according to a notice obtained by 5 EYEWITNESS NEWS.

The notice stated Simonette’s fiancé had violated the crime free/drug free ordinance, but that Simonette was responsible for what happened, even though she was not present when the assault occurred and was never charged with a crime.

Simonette, who has struggled throughout her life with mental illness according to court records, was unable to find stable housing in the months after the eviction. Five years later, she is still homeless and stays most nights at the Harbor Light Shelter in Minneapolis.

“They just gave me the letter and that was it,” Simonette said. “Everything was just coming to a complete stop for me. I didn’t know what else to do.”

Tom Harmening, the city manager in St. Louis Park, said tenants can still be evicted without being convicted or charged with a crime because “it’s not a law enforcement matter” and that tenants acknowledge the ordinance when they sign a lease.

“I’m confident that the way we are enforcing this ordinance is treating everybody under the same rules… they know what the rules are,” Harmening said.

Housing advocates who reviewed the findings said it shows police are engaging in a troubling tactic in which they circumvent the criminal justice system.

“It kind of seems like the police department is outsourcing their job to landlords,” said Tim Thompson, president of the Housing Justice Center in Minneapolis. “It does seem like the city or the police are hoping that the landlord does a job that the criminal justice system is supposed to do.”

Two of those landlords, Michael and Deborah Javinsky-Wenzek, called it an “abuse of power” that violates tenants’ constitutional rights.

They were forced to evict their tenants in 2011, after police obtained a warrant, searched the couple’s rental property and found a small amount of marijuana. If they did not comply, the couple risked losing their rental license and paying a monthly $750 fine.

Michael Javinsky-Wenzek said the ordinance allows police to “twist the arm of the owners to do (their) dirty work.”

The couple sued the city in federal court in August 2011, claiming the ordinance violated its tenants’ constitutionally-protected right to due process. Court records show the tenants were not charged with a crime.

That lawsuit was eventually settled and the city later amended the ordinance to allow landlords to appeal a notice for eviction.

However, the couple says the records obtained and reviewed by 5 EYEWITNESS NEWS show the ordinance does not do not enough to protect renters.

“It’s almost like the ordinance is used to create a sort of gated community without the physical gate,” Michael Javinsky-Wenzek said.

Harmening, the city manager who helped write the ordinance more than a decade ago, said it is a civil remedy.

“We don’t need to pile on by charging (tenants) with a crime,” he said.

But when asked why a person is evicted without being charged with a crime, Harmening answered defensively.

“You seem to be suggesting that (an eviction) is a significant penalty that person is facing,” he said.

In many cases, an eviction was likely a much harsher consequence than facing criminal charges, according to Thompson.

“When you have an eviction on your record, it makes it extremely difficult to find other housing,” he said. “It can follow you for years and it’s really a black mark on your record.”

According to the records obtained and reviewed by 5 EYEWITNESS NEWS, more than half of the tenants who were evicted without being charged were accused of possessing a small amount of marijuana or paraphernalia—a petty misdemeanor in Minnesota that’s treated the same as a speeding ticket. But instead of being cited and fined, dozens of renters in St. Louis Park were forced out of their homes.

Thompson said such minor drug charges have “zero impact on the tenants’ suitability as a renter.

Tenants are much more likely to be evicted for violating a crime free-drug free ordinance in St. Louis Park than in surrounding suburbs, according to a review of policies and records from a dozen other cities in the West Metro.

Three of those cities—Brooklyn Park, Brooklyn Center and Robbinsdale—require or recommend eviction for criminal activity.

St. Louis Park has ordered the eviction of three times as many tenants as those cities combined, records show.

In Bloomington, police leave it up to the landlords to decide which tenants should be evicted.

“If there is a civil or criminal act that is in violation of the lease addendum, then it is solely up to the landlord how they proceed with consequences,” Officer Jerry Wukawitz said in a statement.

Thompson said the number of evictions in St. Louis Park is disturbing, “which makes you wonder what’s going on there.”