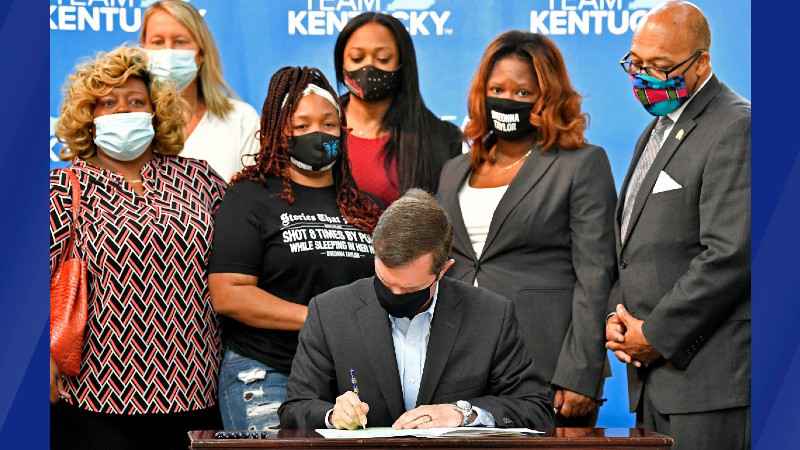 Kentucky Gov. Andy Beshear signs a bill creating a partial ban on no-knock warrants, Friday, April 9, 2021, at the Center for African American Heritage Louisville, Ky. At the signing is Tamika Palmer, the mother of Breonna Taylor, behind Governor left. The bill signing comes after months of demonstrations set off by the fatal shooting of Taylor in her home during a botched police raid.[AP Photo/Timothy D. Easley]

Kentucky Gov. Andy Beshear signed a partial ban on no-knock warrants Friday after months of demonstrations set off by the fatal shooting of Breonna Taylor in her home during a botched police raid.

Taylor, a 26-year-old Louisville emergency medical technician studying to become a nurse, was shot multiple times in March 2020 after being roused from sleep by police. No drugs were found, and the warrant was later found to be flawed.

The law signed by the Democratic governor is not the total statewide ban many demonstrators and some Democratic lawmakers had sought, but it drew bipartisan support in the Republican-controlled legislature. It only permits no-knock warrants if there is “clear and convincing evidence” that the crime being investigated "would qualify a person, if convicted, as a violent offender.”

The warrants must be executed between 6 a.m. and 10 p.m. and officers are required to take additional steps to obtain warrants. Judges are also required to sign legibly when approving them and an EMT must now be nearby during execution of the warrant.

In the Taylor case, a no-knock warrant was approved as part of a narcotics investigation. Nonetheless, police said they did knock and announce their presence before entering Taylor’s apartment, though some witnesses have disputed that claim.

In September, a grand jury indicted one of the officers on wanton endangerment charges for shooting into a neighbor’s apartment, but none was charged in connection with Taylor’s death. That was based in part on the presentation of Republican Attorney General Daniel Cameron, who recommended no charges against the officers who shot into Taylor’s apartment.

One of those officers, Myles Cosgrove, was fired, as was officer Joshua Jaynes, who had secured the warrant. Federal ballistics experts said they believe the shot that killed Taylor came from Cosgrove.