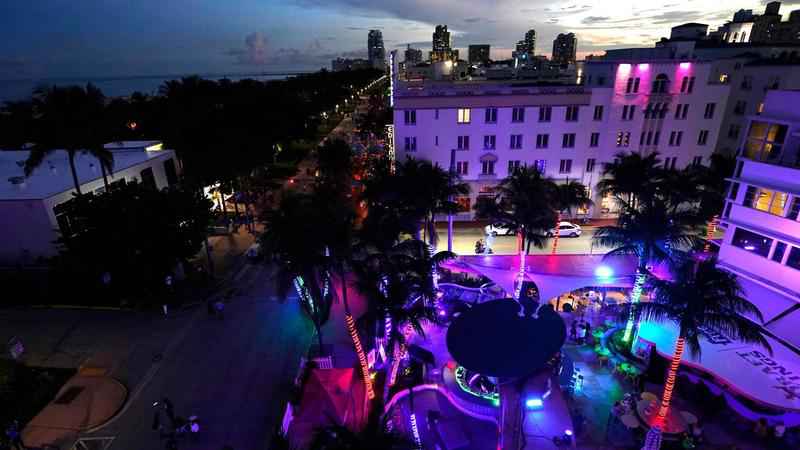 FILE - The Clevelander Hotel and Bar is shown at dusk along Ocean Drive, Friday, Sept. 24, 2021, in Miami Beach, Fla. Last call could come three hours earlier in Miami Beach, where voters fed up with nighttime violence chose yes to rolling back the 5 a.m. closing time for alcohol sales. The voter referendum was held Tuesday, Nov. 2, in response to increasingly raucous crowds and public drinking in the South Beach entertainment district.[AP Photo/Lynne Sladky, File]

Last call could come three hours earlier in Miami Beach, where a majority of voters fed up with nighttime violence chose "Yes" to rolling back the 5 a.m. closing time for alcohol sales.

The voter referendum was held Tuesday in response to increasingly raucous crowds and public drinking in the South Beach entertainment district, where tension has been bubbling for years as party crowds grew from a few weekends into a year-round presence. It worsened during the pandemic when city officials closed the main drag to vehicles and allowed restaurants to offer more outdoor seating along Ocean Drive.

The city imposed an 8 p.m. curfew during spring break, when more than 1,000 people were arrested. But it wasn’t entirely clear how much support such measures had among citizens in a city that depends on tourism.

Mayor Dan Gelber, who pushed for a 2 a.m. closing time, also won reelection on Tuesday. He declared victory for both campaigns.

"This is what our residents want," Gelber said. He called the earlier limit to alcohol sales a first step toward repositioning South Beach’s entertainment district as a "live, work, play" area with new housing, offices and cultural spaces.

The city’s commissioners had agreed to a temporary restriction of early-morning alcohol sales in South Beach last summer. Now city staff must develop legislation to codify the referendum. Gelber said he expects commissioners to support such measures now that voters have spoken.

Exemptions are possible — Gelber said he would be open to letting bigger hotels with security staff continue serving alcohol until 5 a.m.

Critics said the earlier cutoff would cost the city millions without stopping crime. South Beach club owners poured $675,000 into a failed campaign to kill the referendum, the newspaper reported.

"Today’s non-binding straw poll was an attempt at misdirection by leaders who have failed to stem the growing problems of crime on Miami Beach," said a statement from Citizens for a Safe Miami Beach, which plans to "oppose solutions that do nothing to solve crime, but will cost 4,100 local workers their jobs, increase property taxes, and cut tens of millions of dollars from city revenues."