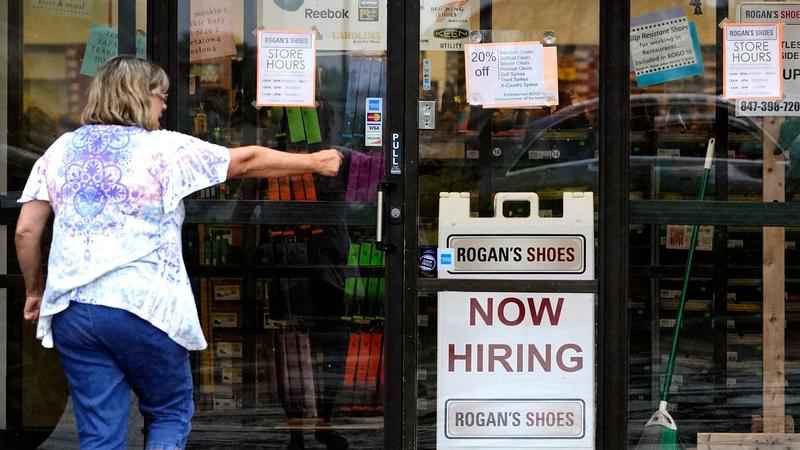 A hiring sign is displayed outside a retail store in Buffalo Grove, Ill., Thursday, June 24, 2021. The number of Americans applying for unemployment benefits has reached its lowest level since the pandemic struck last year, further evidence that the U.S. economy and job market are quickly rebounding from the pandemic recession. The report from the Labor Department released Thursday, July 15 showed that jobless claims fell by 26,000 last week to 360,000.[AP Photo/Nam Y. Huh]

The number of Americans collecting unemployment benefits slid last week, another sign that the job market continues to recover rapidly from the coronavirus recession.

The weekly applications have fallen more or less steadily this year — from a peak of 904,000 in early to January. But they remain high by historic standards: Before COVID struck the United States in March 2020, claims were coming in at about 220,000 a week.

The job market and overall economy have been recovering from the collapse of the spring of 2020. The rollout of vaccines this year has encouraged businesses to reopen or expand their hours and sent cooped-up consumers back out to visit restaurants, bars and shops.

Still the health crisis isn’t over. COVID-19 cases are ticking up as the highly contagious delta variant spreads among the unvaccinated. The United States is reporting an average of more than 50,000 new cases a day, up from fewer than 12,000 a day in late June. The increase in cases could have economic consequences if governments decide to restrict business activity again or if consumers choose to stay at home as a precaution.

For now, though, the economy is so strong that many businesses say they can’t find workers. Employers posted a record 9.2 million job openings in May, advertising vacancies faster than applicants can fill them.

Responding to complaints of a labor shortage, 22 states have decided to end a $300-a-week federal employment benefits meant to cushion the economic fallout from the pandemic. Twenty states have dropped out of two other federal programs — one of which provides benefits to the self-employed and gig workers and another that serves those who have been out of work for six months or longer. The expanded programs are scheduled to expire nationwide Sept. 6.