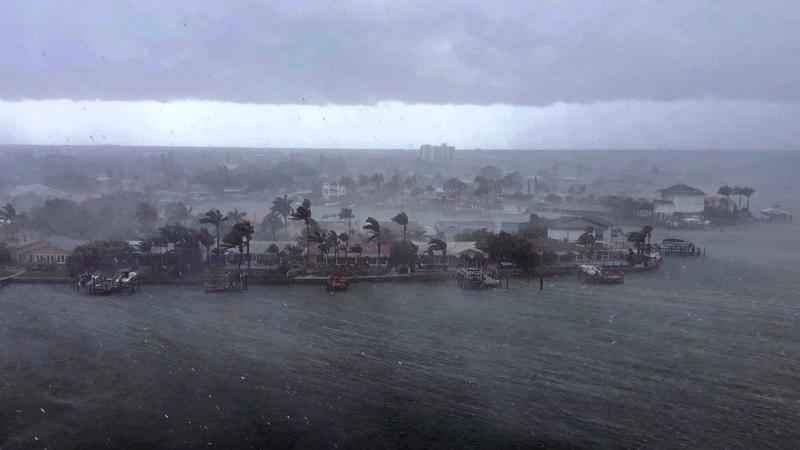 Looking north at the neighborhood of Paradise Island on Treasure Island, Fla., outer bands of Tropical Storm Elsa brings a downpour of rain over the area on Tuesday afternoon, July 6, 2021. Elsa is expected to impact the Tampa Bay area the heaviest during the predawn hours of Wednesday morning. [Marc Topkin/Tampa Bay Times via AP]

Forecasters say Elsa’s path will slice across inland north Florida with heavy rains and wind and then move on to Georgia, the Carolinas and Virginia before heading out to the Atlantic Ocean by Friday.

Elsa wobbled through the Gulf of Mexico, briefly reaching hurricane strength, but was expected to move ashore as a tropical storm. Tornado warnings were issued in several northern Florida counties, including the Gainesville area, on Wednesday morning. Heavy rain and gusty winds are expected across northern Florida once the storm makes an expected turn to the northeast. Some flooding is also expected in the region, where the ground is already saturated from heavy rain late last week.

Gov. Ron DeSantis said at a morning news conference that no major structural damage or deaths from the storm had been reported.

"Clearly, this could have been worse," the Republican governor said, adding that many storm-related deaths come after the system passes. "Be very careful when you’re working to clear debris," he said.

Tropical storm warnings were canceled for Cape Coral and Fort Myers. Further north, the Tampa Bay metropolitan area — while wet and windy — appears to have emerged mostly unscathed. Tampa was no longer under a hurricane warning, but weather forecasters warned of tropical storm conditions, including strong winds and flash flooding.

DeSantis said there were up to 26,000 customers without power in the region, most of them in Hillsborough, Pinellas and Polk counties that surround Tampa Bay. Crews were working to restore electricity and DeSantis said no hospitals reported an outage, which has been a major problem in past storms.

The storm was moving northward, almost parallel to the west coast of the state, according to forecasters.

Schools and government offices in the Tampa area were closed and most public events postponed as Elsa approached Tuesday. Castor, however, predicted hockey’s Stanley Cup finals game between the Tampa Bay Lightning and Montreal Canadiens would be played as scheduled Wednesday night.

Tampa International Airport suspended operations at 5 p.m. Tuesday and planned to resume flights at 10 a.m. Wednesday following a check for any storm damage, according to its website.

The storm also complicated the search for potential survivors and victims in the collapse of a Miami-area condominium on June 24. Despite that challenge, crews continued the search in the rubble of Champlain Towers South in Surfside, Florida, on the state’s southeast coast.

Forecasters said Elsa would slice across inland north Florida as a tropical storm with strong rains and wind, then move on to Georgia, the Carolinas and Virginia before heading out in the Atlantic Ocean by Friday. A tropical storm watch was in effect early Wednesday for the coasts of North Carolina and Virginia from Duck, North Carolina to Chincoteague, Virginia, and for the Chesapeake Bay south of New Point Comfort.

In Georgia, a tropical storm warning was posted along the portion of the coast of Brunswick, with the National Hurricane Center saying tropical storm conditions with sustained winds of up to 50 mph (80 kph) are expected in parts of southeast Georgia.

"Right now, we’re basically looking at a cloudy, rainy and windy day," Glynn County Emergency Management Agency Director Alec Eaton told the Brunswick News on Tuesday. "I feel confident we can sit down and let it pass over us without any major impacts. Hopefully."

To the north in South Carolina, emergency officials were watching Elsa, but no evacuations were ordered during the peak summer beach tourism season. The storm was expected to track inland, but coastal forecasters noted the worst weather was on the east side of the storm and could dump up to 5 inches (13 centimeters) of rain and bring wind gusts up to 55 mph (88 kph) in places like Hilton Head Island, Charleston and Myrtle Beach.

Elsa is the earliest fifth-named storm on record, said Brian McNoldy, a hurricane researcher at the University of Miami.

Your browser does not support the iframe HTML tag. Try viewing this in a modern browser like Chrome, Safari, Firefox or Internet Explorer 9 or later.