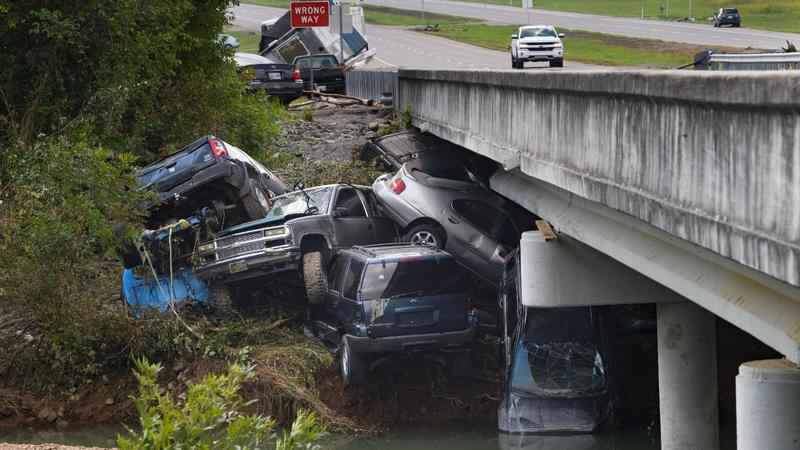 Cars are stacked on top of each other on the banks of Blue Creek being swept up in flood water, Monday, Aug. 23, 2021, in Waverly, Tenn. Heavy rains caused flooding in Middle Tennessee days ago and have resulted in multiple deaths as homes and rural roads were washed away. [AP Photo/John Amis]

President Joe Biden has approved a major disaster declaration sought by Tennessee after record rainfall caused devastating floods that killed at least 22 people, according to a statement sent Tuesday.

The flooding on Saturday took out roads, cellphone towers and telephone lines, leaving people uncertain about whether family and friends survived the unprecedented deluge, with rainfall that more than tripled forecasts and shattered the state’s one-day record.

It also left large swaths of the community suddenly displaced, sorting through difficult decisions about what comes next.

More than 90 people stayed in shelters Sunday, according to the state’s American Red Cross chapter as rescue workers continued their arduous searches for anyone else swept away.

"There’s still a lot of debris in and along the creek that needs to be examined. That’s a painstaking process," Gillespie said during a news conference. "We have to tear that apart, a lot of times, with equipment."

The police chief said the number of people considered missing has fluctuated, as people have not been able to reach loved ones who are later confirmed to be safe.

"I’m reasonably sure that we are less than 10 right now that we are truly not sure about the whereabouts of, or that we don’t think we’ll resolve fairly easily," Gillespie said.

Many of the missing live in the neighborhoods where the water rose the fastest, said Humphreys County Sheriff Chris Davis, who confirmed the 22 fatalities. The names of the missing were on a board in the county’s emergency center and listed on a city of Waverly Facebook page, which is being updated as people call in and report themselves safe.

The Humphreys County Sheriff Office Facebook page filled with people looking for missing friends and family. GoFundMe pages asked for help for funeral expenses for the dead, including 7-month-old twins swept from their father’s arms as they tried to escape.

School was canceled for the week, according to the sheriff’s office. Waverly Elementary and Waverly Junior High suffered extensive damage, according to Brown. About 2,000 homes in the county were without power Monday evening, utility officials said.

Tennessee Gov. Bill Lee toured the area, calling it a "devastating picture of loss and heartache."