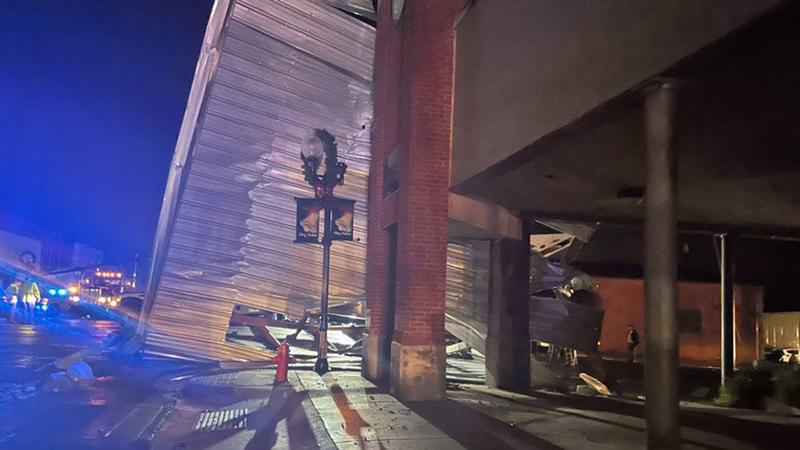 Homes and buildings were damaged and trees were blown down as a line of intense thunderstorms rolled across several Southern states, authorities said. There were no immediate reports of injuries.

“Downtown Winfield is a dangerous area," the Marion County Sheriff’s Department said in a statement on social media. “There are confirmed live power lines down."

Police ordered people to stay out of the downtown area as officers and sheriff’s deputies worked to assess the damage in the town, located about 75 miles northwest of Birmingham.

“If you don’t have to come down here, don’t," Burleson told WBRC. “There are lines down, glass in the road, nails.”

In northeastern Alabama’s Etowah County, an emergency manager reported that a pole barn was destroyed and at least two homes damaged.

The storms prompted tornado watches and warnings Wednesday for parts of several states, including Alabama, Arkansas, Louisiana, Mississippi and Tennessee, but it wasn’t immediately known whether twisters caused the damage in Alabama.

More storms are expected in the region Friday and Saturday, the national Storm Prediction Center said.

The Southern storms come as residents in the Pacific Northwest endured bitter cold and unseasonably frigid weather in the waning days of 2021. Emergency shelters were opened in Washington and Oregon as forecasters said the extreme cold from an arctic blast that blew in Sunday could last until the weekend.

On Thursday, heavy snow halted travel on a large portion of the main east-west highway across Washington state and snarled traffic in the Seattle and Portland, Oregon, metro areas. Authorities closed about 80 miles of Interstate 90 over the Cascade Mountains “due to near zero visibility and adverse road conditions.” There was no immediate estimate as to when the interstate would reopen.