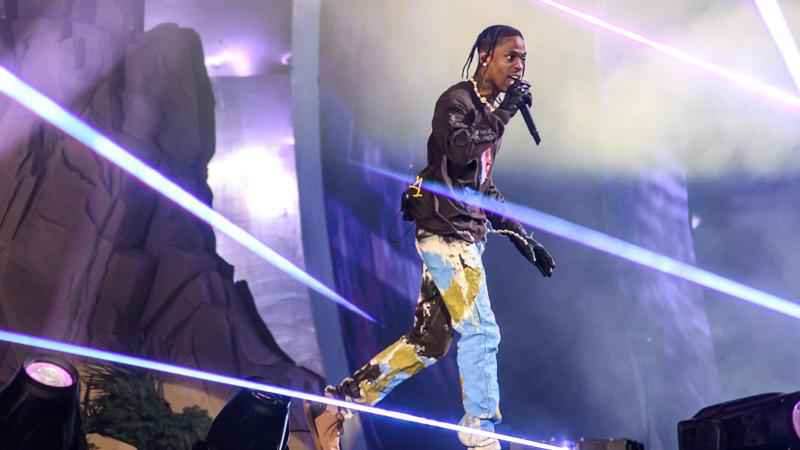 Travis Scott performs at Astroworld Festival at NRG park on Friday, Nov. 5, 2021 in Houston. Several people died and numerous others were injured in what officials described as a surge of the crowd at the music festival in while Scott was performing. Officials declared a “mass casualty incident” just after 9 p.m. Friday during the festival where an estimated 50,000 people were in attendance, Houston Fire Chief Samuel Peña told reporters at a news conference.[Jamaal Ellis/Houston Chronicle via AP]

Lawsuits are piling up less than a week after the deadly crowd crush at the Astroworld concert, and legal experts say it’s not looking good for rapper Travis Scott and the companies behind the tragic event in Houston.

Several legal experts told The Associated Press that Scott’s past incitement of concertgoers offers a history that could make it easier to pursue negligence claims against companies that planned and managed the show, which killed eight people and left hundreds injured. And although the investigations have just begun, experts expect dozens more lawsuits seeking damages that could climb into hundreds of millions of dollars.

At the center of the legal maelstrom is Scott, a 30-year-old rapper famous for whipping fans into a frenzy who has pleaded guilty to misdemeanor charges tied to stirring up crowds at previous concerts.

“This put everyone on notice: ‘This is what has happened, and there is no reason it can’t happen again,’” said John Werner, a lawyer in Beaumont, Texas, who is not involved in Astroworld cases. “They know this is a situation that can get out of hand.”

“This tragedy was months, if not years, in the making,” wrote Houston lawyer Steve Kherkher in a lawsuit demanding more than $1 million for a man trampled in the melee, which he said was “predictable and preventable” given the rapper’s history.

More than a dozen lawsuits have been filed so far against Scott and several companies, including entertainment giant Live Nation, concert promoter ScoreMore, a nonprofit managing the Houston-owned venue. The complaints allege that organizers failed to take simple crowd-control steps, to staff properly and to act on early signs of trouble at the sold-out concert at NRG Park that attracted 50,000 fans.

“The way the concert was set up, planned, organized, and the way things were handled once there was a problem, it boggles the mind,” lawyer Tony Buzbee said this week in announcing that he was suing on behalf of three dozen victims, including 21-year-old Axel Acosta, who died.

Buzbee’s news conference played directly to the court of public opinion, with the tone of an opening statement complete with slides and video clips.

He and other attorneys have seized on an early clue of trouble that came hours before the concert began when throngs of fans rushed past security and metal detectors through a fence.

“Whatever security they had was wholly insufficient,” said former federal prosecutor Philip Hilder, a Houston lawyer not involved in any Astroworld case. “The crowd went right through.”

Hilder also criticized the event’s 56-page planning document, which was submitted to the city for approval. He said the plans were “boilerplate,” with too few details about the safety of the parking lot where the performance was held, which had no seating or aisles and no pens to contain the crowds.

The planning document, obtained by The Associated Press and shared with Hilder, mentions the possibility of tornadoes, bomb threats, active shooters, civil disobedience and riots but makes no mention of a possible crowd surge.

Several lawyers say litigation is also likely to focus on an unexplained delay between the time city officials declared a “mass casualty event” and when the concert organizers finally stopped the show, a 37-minute gap during which fans kept pushing toward the stage, collapsing and getting crushed.

“The band kept going on and on long after the problem existed,” said Frank Branson, a personal injury lawyer in Dallas. “It’s hard to believe that wasn’t a conscious disregard to the audience, to safety and welfare.”

It’s not clear what Scott could see from the stage as his fans were getting pushed, punched, pinned and trampled, some screaming out to stop the show. In an Instagram post on Saturday, the rapper said he was “devastated” by the deaths and suggested he was unaware of the carnage below him.

“Anytime I can make out what’s going on, I stop the show and help them get the help they need,” he said. “I could just never imagine the severity of the situation.”

Representatives of Scott did not respond to an email from the AP seeking comment on Tuesday.

Scott is famous for encouraging fans to ignore security and crowd surf and stage dive in the mosh pit below him. A commercial for this year’s Astroworld event, since removed from YouTube, shows fans breaking through barricades and storming the concert grounds at the 2019 event.

In 2015, Chicago officials said Scott encouraged fans at the Lollapalooza music festival to vault security barricades. The rapper was sentenced to one year of court supervision after pleading guilty to reckless conduct charges.

In 2017, Scott was arrested after he encouraged fans to bypass security and rush the stage during a concert in Arkansas, leaving a security guard, a police officer and several others injured. Scott faced several misdemeanor charges, including inciting a riot. He pleaded guilty to disorderly conduct and paid a fine.

Scott is also being sued by a concertgoer who says he was partially paralyzed when he was pushed from a third-floor balcony at a New York City concert in 2017, an incident the man says happened after Scott encouraged people to jump.

Dallas lawyer Ellen Presby said Scott’s past will help make a case against him, but his likely defense will be to argue that he is just a performer who leaves the security details to other people, which will make it more difficult to attach blame.

Defense lawyers will argue “what he does is hop on the stage and do his thing and it’s all set up for him," she said. If she were defending him, she added, she would “try to find facts that he was as surprised and horrified as everyone else.”

Houston attorney C.J. Baker said a criminal filing against Scott is possible given his past behavior, but it would be a difficult case because it would have to establish intent, not just carelessness.

“You would need to show that he acted in a way that he sort of knew what was happening and acted that way anyway,” he said. “That is a much bigger, much steeper hill to climb" than the lawsuits.

Houston lawyer Joel Androphy said most law firms are likely to focus on civil suits that pile on defendants with resources to pay out big damages.

Aside from Scott, the biggest legal target is Live Nation, a publicly traded company whose stock has soared as fans rush to more concerts and festivals now that many pandemic restrictions have been lifted. The company has refused to comment on what went wrong, but issued a statement Monday that it is helping police investigate and “will address all legal matters at the appropriate time."

The company reported it held $4.6 billion in cash as of September. Its stock fell 1% Tuesday afternoon after plunging more than 5% a day earlier.

Suing Houston and Harris County for negligence would be difficult, given that both enjoy broad protection under the doctrine of sovereign and government immunity, but there are exceptions, several lawyers said.

“They’re mostly protected, but their conduct is going to be looked at with a critical eye,” said Houston lawyer Randy Sorrels, past president of the Texas State Bar Association.