Police: Man who shot Colorado gunman was killed by officer 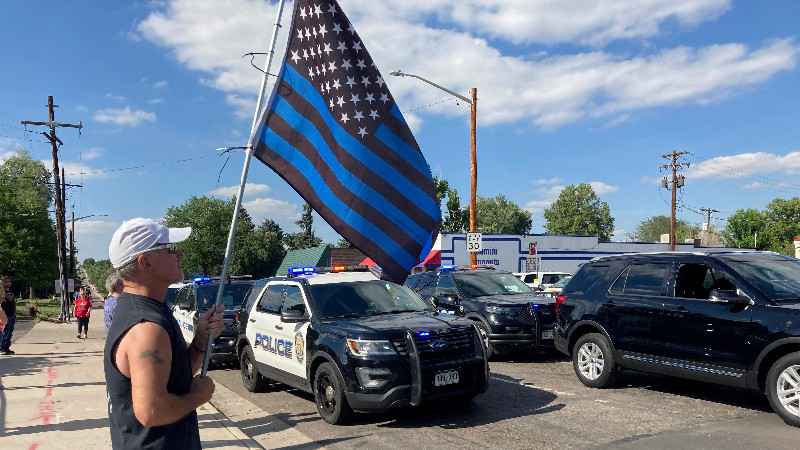 John Garrod, of Arvada, stands holding a blue line flag at the beginning of a line of about 30 police cars lined up for a procession in honor of the officer who was fatally shot in Arvada, Colo., on Monday, June 21, 2021. A gunfight between two men and police officers at a shopping district in a Denver suburb left an officer and one of the suspects dead, authorities said Monday.[AP Photo/Colleen Slevin]

A man who intervened in a shooting that killed a police officer near Denver was shot and killed by a responding officer while holding the suspect’s AR-15, police said Friday.

Johnny Hurley, who has been described by police as a hero who prevented further bloodshed, shot suspect Ronald Troyke on Monday after Troyke gunned down Arvada Officer Gordon Beesley with a 12-gauge semi-automatic shotgun.

After shooting Beesley twice, Troyke shot out the windows of police cars in the city’s downtown district, returned to his truck to get an AR-15 and was confronted by Hurley, who shot him with a handgun. When an officer arrived, Hurley was holding Troyke’s AR-15 and the officer opened fire, police said.

The shooting occurred near a library in Arvada’s historic downtown, with popular shops, restaurants, breweries and other businesses about 7 miles (10 kilometers) northwest of downtown Denver.

A store worker said Hurley was shopping when he heard the gunshots and ran out to confront the shooter with his own gun.

“He did not hesitate; he didn’t stand there and think about it. He totally heard the gunfire, went to the door, saw the shooter and immediately ran in that direction,” Bill Troyanos, who works at the Army Navy Surplus store in downtown Arvada, told Denver news station KMGH-TV.

Troyanos said he heard Hurley fire five or six shots. The gunman fell against a parked vehicle, he said.

Police had not previously confirmed Hurley’s role or said who shot him. In a video posted Friday, Police Chief Link Strate described Hurley as a hero whose actions likely saved lives. He didn’t offer an apology but called Hurley’s death by a responding officer “equally tragic” to Beesley’s killing.

“The threat to our officers and our community was stopped by a hero named Johnny Hurley,” Strate said. “Johnny’s actions can only be described as decisive, courageous and effective in stopping further loss of life.”

Hurley’s family said they were thankful for support from the city and police and were waiting for the outcome of a third-party investigation into the shooting that killed the 40-year-old.

Police say Beesley was targeted because he was an Arvada police officer and that Troyke had expressed a hatred for them.

Police revealed Friday that a document written by Troyke said he planned to kill as many Arvada police officers as he could, including saying, “We the people were never your enemy, but we are now" and “This is what you get, you are the people who are expendable."