Nearly 50K still have no power after Washington state storm 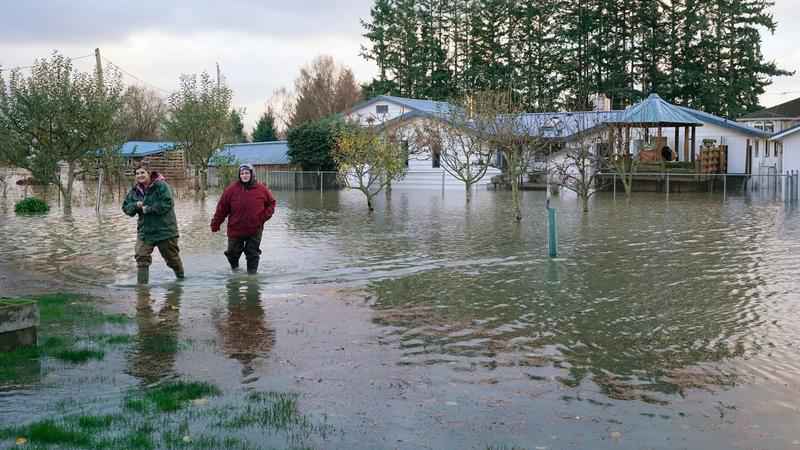 Sisters Myranda, left, and Krysten Archer walk through floodwater from their uncle's home Monday, Nov. 15, 2021, in Sedro-Woolley, Wash. The heavy rainfall of recent days brought major flooding of the Skagit River that is expected to continue into at least Monday evening.[AP Photo/Elaine Thompson]

Nearly 50,000 Washington state electrical customers still had no power Tuesday after days of heavy rain triggered mudslides and floods and forced the closure of the West Coast’s main north-south highway near the Canadian border, officials said.

The rains caused by an atmospheric river — a huge plume of moisture extending over the Pacific and into Washington and Oregon — was easing and road crews managed to reopen southbound lanes of Interstate 5 near Bellingham, Washington. But the highway’s northbound lanes were still closed in the area.

At the height of the storm, about 158,000 electrical customers on Monday had no power and schools in the city of Bellingham were closed on Tuesday for the second day in a row.

North of Bellingham, authorities said one person was still missing Tuesday after being seen in floodwaters clinging to a tree

. And a motorist in Bellingham was injured when a tree fell on a vehicle.Evacuations were ordered in multiple areas as floodwaters swamped business districts and partially submerged cars in communities north of Seattle and winds gusted at speeds of 60 mph (96 kph), including one gust of 58 mph (93 kph) at Seattle-Tacoma International Airport.

Gov. Jay Inslee declared a severe weather state of emergency in 14 counties and said the state Emergency Management Division, with support from the Washington National Guard, would coordinate the response.

In the town of Hamilton about 80 miles (129 kilometers) northeast of Seattle, cars and trailers were packed into the parking lot outside the Red Cross evacuation site at Hamilton Baptist Church, where dozens of residents are waiting out the storm, the Skagit Valley Herald reported.

Skagit County officials compared the flood to severe flooding in 2009, when the Skagit and Samish rivers overflowed and caused damage to homes, farms and infrastructure,

As the water made its way down the swollen Skagit River, people were warned to expect flooding and evacuation orders for other communities.

And just south of the Canadian border in the community of Sumas, Washington, officials said city hall was flooded in a soaking that reminded people of severe floods in 1990.

Deputies evacuated stranded residents and the person who was still missing had been swept away by floodwaters after being seen holding on to the tree, said police from the small city of Everson in Facebook posting. The motorist injured in Bellingham was seriously hurt early Monday while traveling on Interstate 5.

Bellingham’s record rainfal on Sunday totaled 2.78 inches (7 centimeters), crushing the prior daily record from 1998 of 0.88 inches (2.2 centimeters), according to the National Weather Service. Another 1.89 inches (4.8 centimeters) poured down on Bellingham on Monday.

West of Seattle on the Olympic Peninsula, several highways were partially closed and the U.S. Coast Guard helped local authorities evacuate about 10 people near the town of Forks. In nearby Quillayute, a daily record rainfall of 4.01 inches (10 centimeters) was set on Monday.