Man sentenced to death for murder of Nebraska store clerk 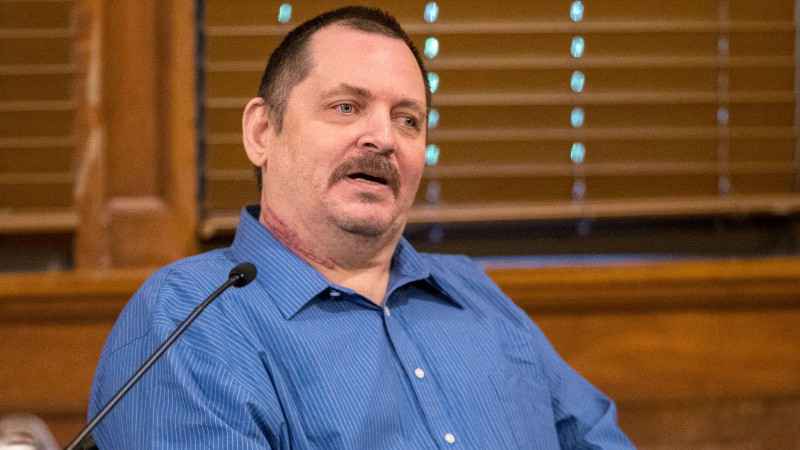 FILE - In this July 9, 2019, file photo, Aubrey Trail testifies during his murder trial at the Saline County Courthouse in Wilber, Neb. Trail was sentenced to death Wednesday, June 9, 2021, for killing and dismembering a Nebraska hardware store clerk who refused to commit to his lifestyle of group sex and fraud.[Chris Machian/Omaha World-Herald via AP, File]

A man was sentenced to death Wednesday for killing and dismembering a Nebraska hardware store clerk who refused to commit to his lifestyle of group sex and fraud.

Aubrey Trail was convicted in 2019 of first-degree murder and criminal conspiracy to commit murder in the 2017 death of Sydney Loofe. A three-judge panel sentenced Trail Wednesday at the county courthouse in Wilber, about 40 miles (65 kilometers) southwest of Lincoln.

Prosecutors said at trial that Trail and his girlfriend, Bailey Boswell, had been planning to kill someone before Boswell met the 24-year-old Loofe, a cashier at a Menards store in Lincoln, on the dating app Tinder and lured her to them.

Loofe’s body parts were found in garbage bags, cut into 14 pieces and left in ditches along country roads in rural Clay County.

“I had no doubt she would tell people if I let her go,” said Trail, who was handcuffed, clad in orange jail garb and sat in a wheelchair throughout the sentencing.

Trail didn’t apologize to Loofe’s family in the courtroom, saying it “would be an insult to you for what I’ve put you through," but he said killing her was the only thing he has done in his life that he regrets.

Trail admitted that he repeatedly lied to authorities and plotted to kill Loofe two to three hours before he carried out the murder. But he asserted that Boswell wasn’t in the room and didn’t know he was going to do it. He said he “could care less” about the sentence he receives.

“I am not looking for mercy, forgiveness, or anything else,” he said.

Saline County District Court Judge Vicky Johnson said the murder met the legal standard of “exceptional depravity” necessary to impose the ultimate punishment. She noted that Trail — who changed his story numerous times — bragged about the murder and implied to investigators that he and Boswell drank Loofe’s blood. Evidence also showed he bought a hacksaw, tools and bleach before the killing.

“Trail’s words and actions demonstrate he had no regard for the life of Sydney Loofe beyond his own personal pleasures,” Johnson said.

Trail becomes the 12th man on death row in Nebraska, a state that rarely carries out executions, currently lacks the drugs it needs to do so and isn’t likely to get them anytime soon.

Trail missed much of his own trial after slashing his neck in the courtroom in 2019 and yelling, “Bailey is innocent, and I curse you all."

Trail’s court-appointed attorney, Ben Murray, said his client would appeal the sentence at least initially, but he didn’t know if Trail would continue to do so over the long term, as other Nebraska death-row inmates have done.

In Nebraska, all death penalty sentences are automatically appealed. The state’s most recent execution was of convicted murderer Carey Dean Moore in 2018. Before that, Nebraska’s last execution was in 1997.

Authorities said Trail and Boswell were captured on video at a Home Depot in Lincoln on Nov. 15, 2017, buying tools used to dismember Loofe, hours before her death and while she was still at work.

Boswell was convicted in October of first-degree murder, conspiracy to commit murder and improper disposal of human remains for her role in Loofe’s death. Prosecutors are also seeking the death penalty for Boswell; a three-judge panel will start hearing evidence to determine her fate June 30.