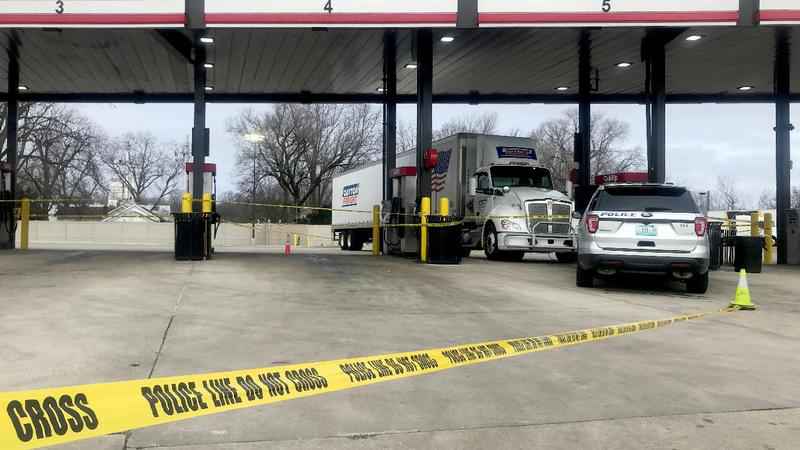 A tractor trailer is stopped behind police tape as law enforcement investigate the scene of a carjacking and shooting at a QuikTrip in St. Peters, Mo., on Wednesday, Dec. 29, 2021. Officials believe the suspect was the same person who fatally shot a sheriff's deputy in Wayne County, Ill., earlier Wednesday, a St. Peters police spokesperson said.[Hillary Levin/St. Louis Post-Dispatch via AP]

Authorities have arrested a person in the shooting of an eastern Illinois deputy early Wednesday and a carjacking in neighboring Missouri a couple of hours later.

Indiana State Police spokesman Sgt. Todd Ringle said the person was arrested at a home near Carlyle, Illinois, about 1:30 p.m. Wednesday. Carlyle is a Clinton County town about 45 miles east of St. Louis. No other suspect was being sought, the St. Louis Post-Dispatch reported.

No other information about the arrest or the suspect was immediately available.

The Wayne County, Illinois, Sheriff’s Office said in a Facebook post that Deputy Sean Riley responded to a motorist assist call on Interstate 64 near Mill Shoals around 5 a.m. Wednesday. A second officer who arrived at the scene found Riley dead. The deputy’s squad car was later found abandoned on I-64.

The search for the suspect extended to St. Peters, Missouri, where police believe a man involved in a shooting and carjacking shortly after 7 a.m. Wednesday at a QuikTrip convenience store was the same person who killed the deputy.

St. Peters police spokeswoman Melissa Doss said in an email that “there was evidence at the QuikTrip scene which indicates the suspect was also involved in the series of crimes which occurred in Illinois earlier this morning.” She declined to elaborate, citing the ongoing investigation.

St. Peters police said the man drove away from the convenience store in a car that was later found near Interstate 70 in nearby O’Fallon, Missouri. The suspect then stole a white pickup truck, police said.

The Missouri carjacking victim was hospitalized with injuries police described as not life-threatening.

Mill Shoals is about 115 miles east of St. Louis.