Funeral held for Texas teen who died at Astroworld festival 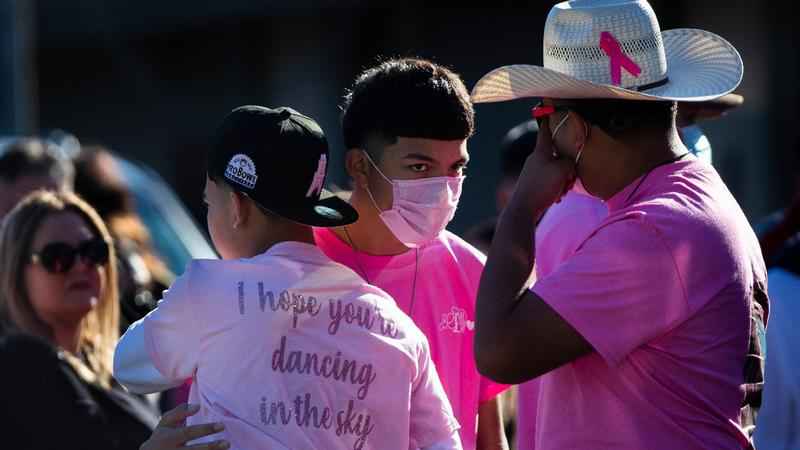 A man wears a t-shirt that reads "I hope you're dancing in the sky" in memory of Astroworld victim Brianna Rodriguez who was known for being a dancer as family, friends and community members gathered at La Paz Memorial Funeral Home to remember Rodriguez, Saturday, Nov. 13, 2021, in Houston. Rodriguez died from injuries sustained during a stampede at the Astroworld music festival.[Marie D. De Jesús/Houston Chronicle via AP]

Brianna Rodriguez, who at 16 was among the youngest of the nine people killed as the crowd surged at the Astroworld music festival in Houston, has been remembered by friends and family for her friendliness and love of dance.

Over 250 people gathered Saturday in Houston for Rodriguez’s funeral, the Houston Chronicle reported. Her white casket was surrounded by flowers and balloons in pink and white — her favorite colors.

“Every time she walked into a room, she would light up the room,” said her friend, Ariah Herrera, 16, as she cried. “She cared for everybody. She was a friend to everybody.”

Rodriguez was with a group of friends at the festival on Nov. 5 when the crowd surged toward the stage during rapper Travis Scott’s performance. Hundreds of people were treated for injuries sustained in the crush of bodies.

Congresswoman Sheila Jackson Lee of Houston delivered a eulogy and presented Rodriguez’s parents with an American flag that flew over Congress and a Congressional resolution that recognized Rodriguez’s life.

Earlier this week, Jackson Lee visited Heights High School, where Rodriguez was a junior and a member of the school’s dance team.

Her father, Osvaldo Rodriguez, recalled telling her: “Respect everyone. Everybody has different likes and wants in life, but if you love everyone, they’ll love you back.”

Jocelin Camero, 16, said Rodriguez befriended her when she was a new student in middle school.

“I walked into dance class not knowing anybody, and she welcomed me,” Camero said, choking back tears. “She was one of the greatest friends I had.”

The funeral for another Houston teen who died at the concert, 14-year-old John Hilgert, is set for Wednesday.