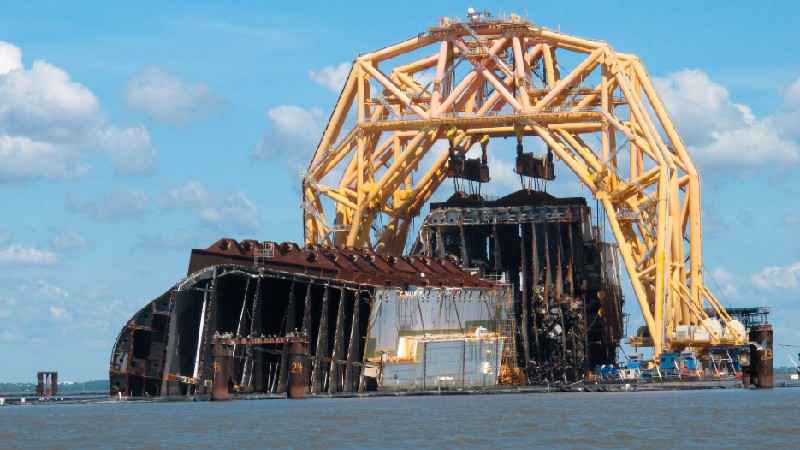 FILE - In this Monday, April 26, 2021, file photo, a towering crane pulls the engine room section away from the remains of the capsized cargo ship Golden Ray, offshore of St. Simons Island, Ga. A large amount of oil has escaped a barrier after it was released while crews were dismantling the overturned cargo ship along the Georgia coast, the Coast Guard said Thursday, July 1, 2021.[AP Photo/Russ Bynum, File]

A large amount of oil has escaped a barrier after it was released while crews were dismantling an overturned cargo ship along the Georgia coast, the Coast Guard said Thursday.

Coast Guard Petty Officer 2nd Class Michael Himes said it was hard to estimate how much oil leaked, but it has affected marsh grass along the shoreline.

Crews noticed the leak around 8 a.m. while cutting away a fifth section of the Golden Ray, which capsized in September 2019 with about 4,200 automobiles in its cargo decks. Roughly half the ship remains partially submerged off St. Simons Island, about 70 miles south of Savannah.

“This is an unfortunate consequence of removing a wreck in this kind of environment,” Himes said.

Demolition crews began working in November to remove the ship by cutting it into eight giant chunks and placing them on barges. Officials had hoped to have the work finished by last January, but numerous problems have caused delays.