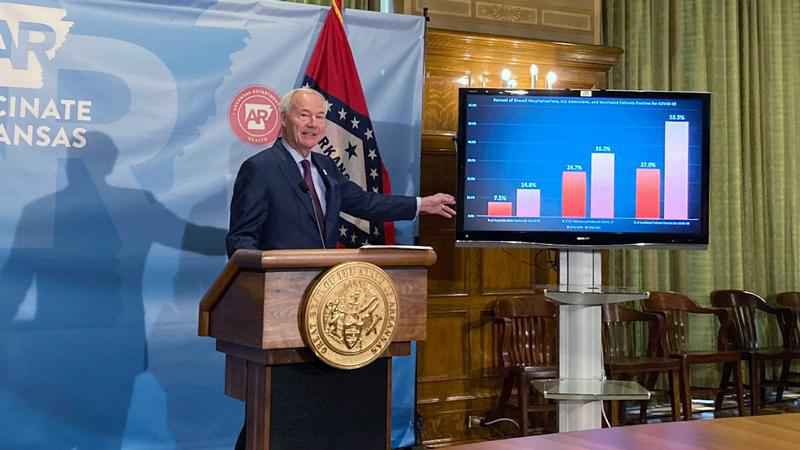 In this July 29, 2021 file photo, Arkansas Gov. Asa Hutchinson stands next to a chart displaying COVID-19 hospitalization data as he speaks at a news conference at the state Capitol in Little Rock, Ark.[AP Photo/Andrew DeMillo]

Arkansas on Monday set a new record for the number of people in the state hospitalized because of COVID-19 as its coronavirus surge continued.

The Department of Health reported that there are only eight intensive care unit beds available in the state. There are 509 COVID-19 patients in ICUs around the state and 286 on ventilators.

Arkansas ranks third in the country for new virus cases per capita, according to numbers compiled by Johns Hopkins University researchers. The state’s cases have been skyrocketing in recent weeks, fueled by the delta variant of the virus and state’s low vaccination rate.

Only about 37% of the state’s population is fully vaccinated against the virus.

The state’s COVID-19 surge has been straining resources at hospitals around the state.

Arkansas Children’s Hospital said 27 children were hospitalized with COVID-19, the highest it has seen since the pandemic began, surpassing the record it set two weeks ago. Twelve of the patients are in intensive care and eight are on ventilators.

The spike in hospitalizations came days after an Arkansas judge temporarily blocked the state from enforcing a law that prevents schools and other governmental bodies from imposing mask mandates.

The majority-Republican Legislature last week refused to change the law despite GOP Gov. Asa Hutchinson calling on them to roll it back for some schools. Hutchinson signed the law in April, but has said he regrets that decision.

Hours after the judge’s ruling, the Fayetteville City Council approved an ordinance requiring masks in city-owned facilities and some public places. The eStem and Lisa Academy public charter schools also announced over the weekend they would require teachers and students to wear masks.