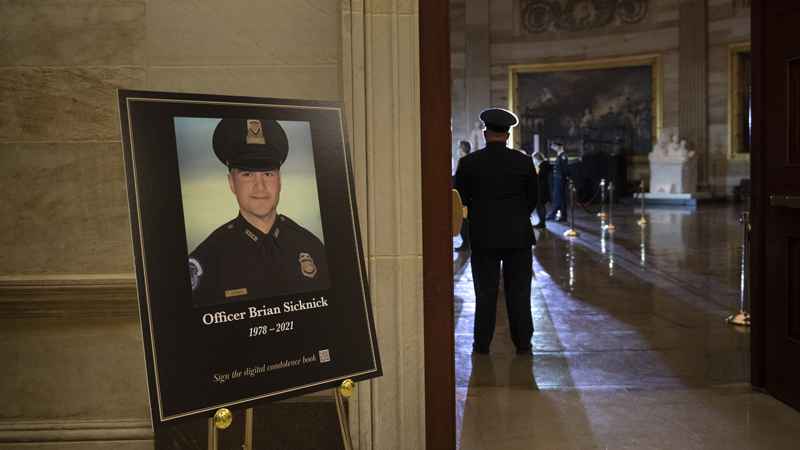 In this Feb. 2, 2021, file photo a placard is displayed with an image of the late U.S. Capitol Police officer Brian Sicknick on it as people wait for an urn with his cremated remains to be carried into the U.S. Capitol to lie in honor in the Capitol Rotunda in Washington.[Brendan Smialowski/Pool via AP]

Federal investigators probing the death of a U.S. Capitol Police officer killed in the Jan. 6 riot have zeroed in on a suspect seen on video appearing to spray a chemical substance on the officer before he later collapsed and died, two people familiar with the matter told The Associated Press.

The FBI has obtained video that shows the person spraying Brian Sicknick and other law enforcement officers during the Jan. 6 riot, the people said. But they cautioned that federal agents haven’t yet identified the suspect by name and the act hasn’t been directly tied to Sicknick’s death.

The idea that Sicknick died after being sprayed by a chemical irritant has emerged in recent weeks as a new theory in the case.

Capitol Police officer who died after riot lies in honor

Investigators initially believed that Sicknick was hit in the head with a fire extinguisher, based on statements collected early in the investigation, according to one of the people and another law enforcement official briefed on the case. But as they’ve collected more evidence, the theory of the case has evolved and investigators now believe Sicknick may have ingested a chemical substance — possibly bear spray — during the riot that may have contributed to his death, the officials said.

The people could not publicly discuss the details of an ongoing investigation and spoke to The Associated Press on condition of anonymity.

Sicknick died after defending the Capitol against the mob that stormed the building as Congress was voting to certify Joe Biden’s electoral win over Donald Trump. It came after Trump urged supporters on the National Mall to “fight like hell” to overturn his defeat.

The circumstances surrounding Sicknick’s death remain unclear and a final cause of death has not yet been determined. Capitol Police have said he died after he was injured “while physically engaging with protesters” and this week, the agency’s acting chief said officials consider it a line-of-duty death.

Sicknick collapsed later on, was hospitalized and died. The Justice Department opened a federal murder investigation into his death, but prosecutors are still evaluating what specific charges could be brought in the case, the people said.

In a statement late Friday, Capitol Police said the medical examiner’s report on Sicknick’s death is not yet complete. “We are awaiting toxicology results and continue to work with other government agencies regarding the death investigation,” the statement said.

The New York Times first reported investigators were zeroing in on one suspect in the case; CNN previously reported law enforcement had collected video evidence to identify a handful of potential suspects.

The FBI has already released about 250 photos of people being sought for assaulting federal law enforcement officers during the riot. Some have already been arrested and the Justice Department said about 300 people have been charged with federal offenses related to the riot.