Another building evacuated; search goes on at collapse site in Florida 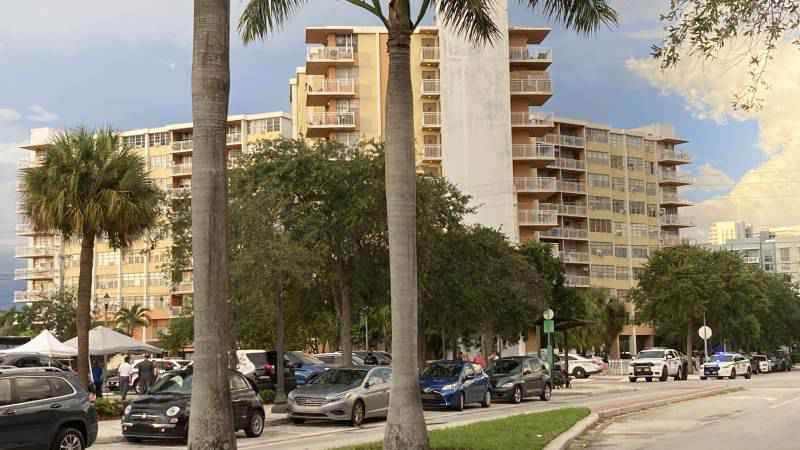 Residents of a Miami-area high-rise loaded clothes and valuables into suitcases, laundry baskets and wagons and wheeled them to waiting cars after they were forced to evacuate the building when it was found to be unsafe in a review prompted by the deadly collapse of a building just a few miles away.

An audit prompted by the collapse of Champlain Towers South in nearby Surfside found that the 156-unit Crestview Towers in North Miami Beach, about 5 miles (8 kilometers) away, had been deemed structurally and electrically unsafe in January, the city said in a news release. Friday afternoon, law enforcement authorities cordoned off the area and went door-to-door in the apartment building, telling residents they had to leave the 49-year-old structure.

Harold Dauphin was on his way home from picking up his son at camp Friday when he noticed a helicopter buzzing around his apartment and a heightened police presence. He wondered whether there had been a shooting nearby, but then came home to find out that his building was being evacuated.

"They said the building is unsafe to live, and it’s an immediate evacuation," Dauphin said, speaking outside after he’d cleared out. He and his son live on the second floor. He said he hadn’t previously heard anything about the problems that the city mentioned in their news release. He grabbed what he could — clothes, his work uniform and some electronic devices — and the two left.

"It’s unfortunate, but I understand. Knowing what happened in Surfside, you know, it’s understandable," he said.

It is the first building to be evacuated since municipal officials in South Florida, and statewide, began scrutinizing older high-rises in the wake of the Surfside collapse to ensure that substantial structural problems are not being ignored.

Meanwhile, authorities in Surfside said four more bodies had been found in the rubble, including the 7-year-old daughter of a Miami firefighter, bringing the confirmed death toll to 22.

But there was also relief. Closer inspection of the missing persons list reduced the number from 145 to 126 after duplicate names were eliminated and some residents reported missing turned up safe, officials said.

"So this is very, very good news," Miami-Dade Mayor Daniella Levine Cava said. She said the numbers were expected to keep changing because detectives are continually reviewing the list and verifying reports.

The discovery of the girl’s remains was especially hard on rescuers, Levine Cava said.

"It was truly different and more difficult for our first responders. These men and woman are paying an enormous human toll each and every day, and I ask that all of you please keep them in your thoughts and prayers," she said at a news conference.

The mayor also said she signed an emergency order to demolish the remaining part of the building once engineers have signed off on it. She said the order was signed now so that the demolition can move quickly once a date is set. It will likely be weeks before the demolition is scheduled, officials said.

No one has been rescued since the first hours after the June 24 collapse. Authorities are also preparing in case Hurricane Elsa — now in the eastern Caribbean — brings strong winds to South Florida. Search efforts have already been stopped briefly several times because of inclement weather.

"We will try to go as long as we can, but you can see from different periods of inclement weather we’ve had, we have stopped," Miami-Dade Fire Chief Alan Cominsky said.

Officials did not immediately release details about the structural problems that prompted Friday’s evacuation in North Miami Beach, but Crestview Towers had reported millions of dollars in damage from 2017’s Hurricane Irma.

A letter posted less than two weeks ago on the community’s website said some repairs were underway or expected to begin soon on the building, after repeated delays. Plans included installing a new roof, replacing a generator that was over 40 years old, changing the entire building’s lighting system, and more.

"Last year has been a different year due to the pandemic and many things have been postponed for countless reasons, but this year we have started to work hard," the letter said.

The building’s condo association could not be immediately reached for comment on the delay between Friday’s evacuation and the January recertification report that revealed unsafe conditions.

Darwin Reyes said he lived in the building during Hurricane Irma and a chunk of the balcony above his fell onto his balcony during the storm. He listed multiple other complaints about the building, including elevators that often didn’t work and pipes that didn’t drain well. He said he had been planning to move after living there for five years.

On Friday, Reyes had just woken up from a nap as he prepared for a night shift at a hotel he works at. He checked his Instagram feed and saw that a notice had just been posted that said his building was being evacuated. He looked into the hallway and saw people scurrying back and forth, phones to their ears, with bags and suitcases.

He and his wife packed what they could into multiple suitcases. She went down in the elevator, and he took the stairs from the 9th floor. In the scramble, one of their suitcases went missing, and as darkness fell Friday they were still trying to locate it.

"Right now I’m officially homeless," he said, adding that he would probably go stay with a relative.