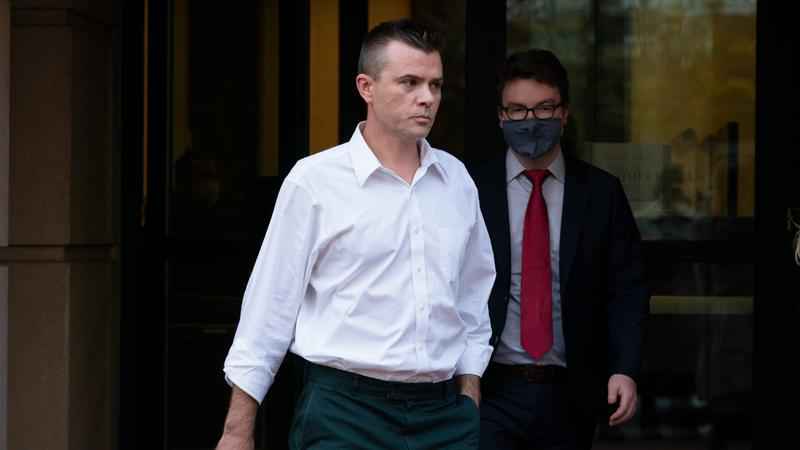 Igor Danchenko leaves Albert V. Bryan United States Courthouse in Alexandria, Va., Thursday, Nov. 4, 2021. Danchenko, a Russian analyst who contributed to a dossier of Democratic-funded research into ties between Russia and Donald Trump, was arrested Thursday on charges of lying to the FBI about his sources of information, among them an associate of Hillary Clinton. [AP Photo/Manuel Balce Ceneta]

A Russian analyst who contributed to a dossier of Democratic-funded research into ties between Russia and Donald Trump was arrested Thursday on charges of lying to the FBI about his sources of information, among them a longtime supporter of Hillary Clinton.

The case against Igor Danchenko is part of special counsel John Durham’s ongoing investigation into the origins of the FBI’s probe into whether Trump’s 2016 campaign and Russia had conspired to tip the outcome of that year’s presidential campaign.

The indictment, the third criminal case brought by Durham and the second in a two-month span, is likely to boost complaints from Trump allies that well-connected Democrats worked behind the scenes to advance suspicions about Trump and Russia that contributed to the FBI’s election-year investigation.

The case does not undercut investigators’ findings that the Kremlin aided the Trump campaign — conclusions that were not based on the dossier, which was barely mentioned in special counsel Robert Mueller’s report. But the indictment does endorse a longstanding concern about the Russia probe: that opposition research the FBI relied on as it surveilled a Trump campaign adviser was marred by unsupported, uncorroborated claims.

The five-count indictment accuses Danchenko of making multiple false statements to the FBI when interviewed in 2017 about his role in collecting information for Christopher Steele, a former British spy whose research into ties between the Trump campaign and Russia was financed by Democrats.

Danchenko, a U.S.-based Russian who’d specialized in Russian and Eurasian matters as an analyst at Brookings Institution, was a significant source for Steele as Steele compiled his dossier of research. That dossier, the target of intense derision from Trump, was ultimately provided to the FBI and used by federal authorities as they applied for and received surveillance warrants targeting former Trump campaign aide Carter Page.

According to the indictment, Danchenko repeatedly lied to the FBI about his sources of information. Prosecutors say that deception mattered because the FBI “devoted substantial resources attempting to investigate and corroborate" the dossier’s allegations and had “relied in large part” on that research in obtaining the surveillance warrants.

The indictment says Danchenko misled the FBI by denying that he had discussed any allegations in the dossier with a contact of his who was a public relations executive and longtime Democratic operative who volunteered for the campaign of Clinton, Trump’s 2016 opponent.

In fact, the indictment says, Danchenko had sourced one or more allegations in the dossier anonymously to that Clinton associate. As the FBI worked to corroborate the dossier’s allegations, it would have been important to know the Democrat’s role in feeding information for it because it bore upon his “reliability, motivations, and potential bias as a source," according to the indictment.

The individual is not named in court papers, but his lawyer confirmed his identity as Charles Dolan Jr., a former executive director of the Democratic Governors Association who advised Hillary Clinton’s 2008 presidential campaign and volunteered for her 2016 campaign. The lawyer, Ralph Drury Martin, declined to comment further on the ongoing investigation.

The charging documents also refer to salacious and unsupported sexual allegations involving Trump’s behavior at a Moscow hotel that were included in the dossier but that Trump has vigorously disputed, including in private conversations with former FBI Director James Comey.

The indictment says Danchenko told the FBI he had collected information about Trump’s activities at the hotel from multiple sources but didn’t himself know if the sexual allegations were true.

According to the indictment, Dolan stayed in June 2016 at the same Moscow hotel and received a tour of the presidential suite. A hotel staff member revealed that Trump had stayed there, but Dolan and another unidentified person said the staff member didn’t mention any sexual or salacious activity.

The indictment says that since Dolan “was present at places and events where Danchenko collected information” for the dossier, Danchenko’s deception about his relationship with Dolan “was highly material to the FBI’s investigation of these matters.”

The indictment also accuses Danchenko of lying to the FBI about a July 2016 phone call he claimed he received from someone he believed to be the president of the Russian-American Chamber of Commerce. That person, according to the dossier and Danchenko’s account to the FBI, told him about a “well-developed conspiracy of co-operation” between the Trump campaign and Russia — an assertion that prosecutors say “would ultimately underpin” the surveillance warrant applications.

The indictment says Danchenko fabricated his account and never actually received such a phone call.

Both the dossier and the Durham probe are politically charged.

Trump’s Justice Department appointed Durham as Trump claimed the investigation of campaign ties to Russia was a witch hunt. Trump pointed to the dossier, much of which the indictment says the FBI was unable to corroborate, as evidence of a tainted probe driven by Democrats.

But the dossier had no part in launching the Trump-Russia investigation, though the Justice Department’s inspector general did fault the FBI and the department for their handling of it. Mueller ultimately found questionable ties between the Trump campaign and Russia, but not sufficient evidence to pursue criminal charges. Democrats have lambasted the Durham probe as politically motivated, but the Biden administration has not stopped it.

The indictment is the third criminal action from Durham.

Cybersecurity lawyer Michael Sussmann was charged in September with lying to the FBI during a 2016 conversation in which he relayed concerns about potentially suspicious cyber contacts between a Trump Organization server and the server of a Russian bank. Durham’s team says he concealed from the FBI that he was presenting the concerns as a lawyer for the Clinton campaign. He has pleaded not guilty.

Last year, Kevin Clinesmith, a former FBI lawyer, admitted altering an email related to the surveillance of Page and was given probation.