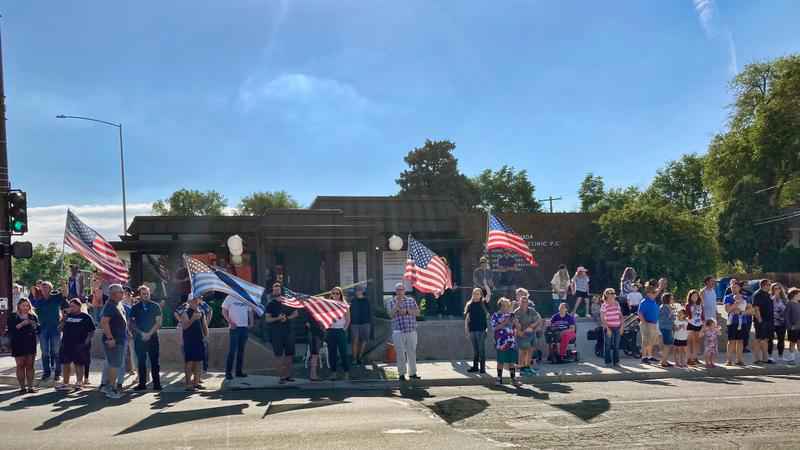 People line the street with flags during a procession in honor of an officer who was fatally shot in Arvada, Colo., Monday, June 21, 2021. A gunfight between two men and police officers at a shopping district in a Denver suburb left an officer and one of the suspects dead, authorities said Monday. [AP Photo/Colleen Slevin]

A gunman is believed to have shot and killed an officer and another person in a shopping district in a Denver suburb Monday before being fatally shot by police, authorities said.

An officer responded to a call at 1:15 p.m. about a suspicious incident near the library in the city of Arvada, and about 15 minutes later, a 911 call came in about shots fired and the officer hit, Deputy Chief Ed Brady said at a news conference. The officer who was killed has been identified as Gordon Beesley, a 19-year Arvada department veteran, police said later Monday, according to The Denver Post.

Another person believed to have been shot by the gunman was taken to a hospital and died, police said. The attacker also was shot and killed.

Authorities didn’t immediately describe the circumstances of the shooting but said no one else is believed to have been involved.

The shooting occurred in Olde Town Arvada, the city’s downtown district with shops, restaurants, breweries and other businesses. It’s listed on the National Register of Historic Places and is about 7 miles (10 kilometers) northwest of downtown Denver.

It comes three months after a gunman opened fire and killed 10 people, including a police officer, at a supermarket in Boulder, about 20 miles (32 kilometers) northwest of Arvada.

The Arvada officer’s death, just the third in Police Department history, was especially painful after the mass shooting in nearby Boulder, Arvada Mayor Marc Williams said. Arvada police helped respond and investigate that attack, he said.

"This is by far the saddest day for our Police Department," Williams said.

The mayor said he was in his car in the area shortly before 2 p.m. "when literally I saw 11 police cars with their flashing lights and sirens on race past me. I knew something serious had happened. I didn’t know how serious."

Arvada resident Brady Turner said he was pulling into the Army and Navy store in the area when he noticed police cars driving in behind him and a person on a stretcher being put into an ambulance in between the parking lot and the store. He said he took off in his car.

"I just got out of there," Turner said.

About five minutes later, he heard gunshots near the library about a block away.

Arvada closed its City Hall and canceled a City Council meeting to provide resources to investigators and other first responders. Colorado Gov. Jared Polis issued a statement expressing his condolences to the officer’s family and friends, while the Colorado State Patrol tweeted: "All our love to the @ArvadaPolice and the family, blood and blue, of their fallen officer. We stand with you."

Police vehicles drove behind a hearse carrying the body of the slain officer to the Jefferson County coroner’s office, and some residents lined a street with flags to watch the procession.

John Garrod of Arvada held a black and white flag with blue stripes at the beginning of a line of about 30 police cars before the procession, a flag he hangs outside his house whenever an officer is killed. His son, brother-in-law and nephew are all in law enforcement, he said.

"It breaks my heart whenever this happens but especially when it happens so close to home," Garrod said. "These are the same officers I wave to when I am walking my dog."