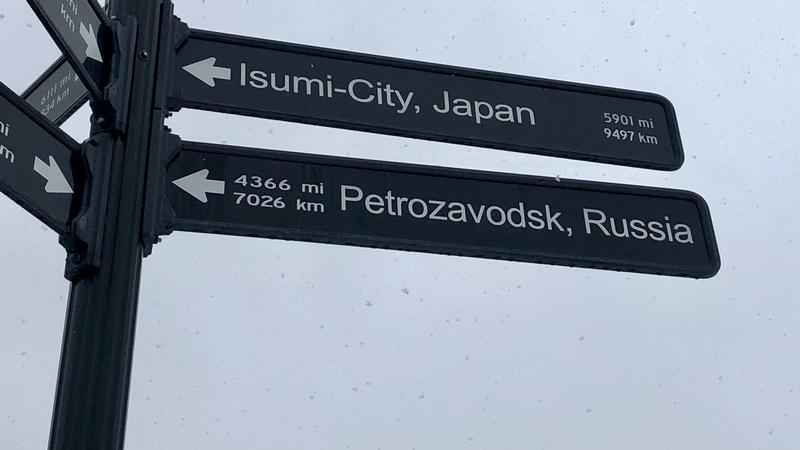 A sign in Duluth's Sister Cities Park points to each of its five sister cities. Credit: WDIO

A Minnesota city which has had a sister city in Russia since 1987 will continue to keep that relationship.

Hubbard owned WDIO-TV reports when Russia invaded Ukraine, Duluth Sister Cities International had to chart its next steps with Petrozavodsk.

“We’re all appalled, and most of us were surprised, including me,” Tom Morgan said. “I didn’t see this coming. I didn’t believe that Putin would do this.”

WDIO reports Morgan, who is a Russian language professor at the College of St. Scholastica, helped establish Duluth’s relationship with Petrozavodsk. He has also visited the country many times.

“This is not a trivial thing, this war,” he said. “The last thing we want to do is be insensitive to what the Ukrainians are going through. We want to honor that.”

A long discussion led to Duluth Sister Cities International deciding to maintain its connection to Petrozavodsk.

He pointed to the beginning of the two cities’ relationship. It was established in 1987, in the midst of the Cold War.

Since then, there have been many exchanges between people like students, social workers, and doctors. Morgan said there was even once a canoe exchange.

WDIO states Duluth Sister Cities International receives some tourism tax funds from the City of Duluth. The board did not see fit to sever ties with everyday Russians who had no part in the decision to invade Ukraine.

“This is all they have. Their doors have been shut at so many levels to them. They are outcasts. They are pariahs,” Morgan said.

He said the Russian citizens he has talked to in Petrozavodsk are angry, embarrassed, and disappointed.

“So many of them have been so committed to people-to-people peacemaking relationships. And now they feel that that’s all down the drain,” he said. “And they’re in a kind of deep despair right now.”

Morgan compared it to how he felt as an American when Russians criticized him during the Vietnam War.

“I personally didn’t do that. My government did it. And the answer that I would sometimes give is yes, our government did that. But the American people stopped it,” he said. “It took 10 years, but we stopped it.”

He said cutting ties with Petrozavodsk would be like turning your back on family in trouble.

“None of the Russians I know in Petrozavodsk would dream of doing something like this or would support this. I’m sure they wouldn’t.”