An emotional heroes’ welcome took place Saturday night amid a mission of healing.

The international arrivals gate at Minneapolis-St. Paul International Airport was packed with dozens of men, women and children from the local Ukrainian community who gathered to greet five Ukrainian soldiers with limb-loss injuries suffered in the fight against Russian forces.

“I think it’s an amazing opportunity and we’re so excited to welcome them here,” says Olga Sydorenko from Edina. “They are the ones protecting the motherland, my family, my friends, people we know. And we cannot be more grateful.”

The soldiers were greeted by an enthusiastic crowd — many carrying Ukrainian flags, others wearing traditional clothing.

In the coming weeks, the five men will be fitted with state-of-the-art prosthetic limbs. 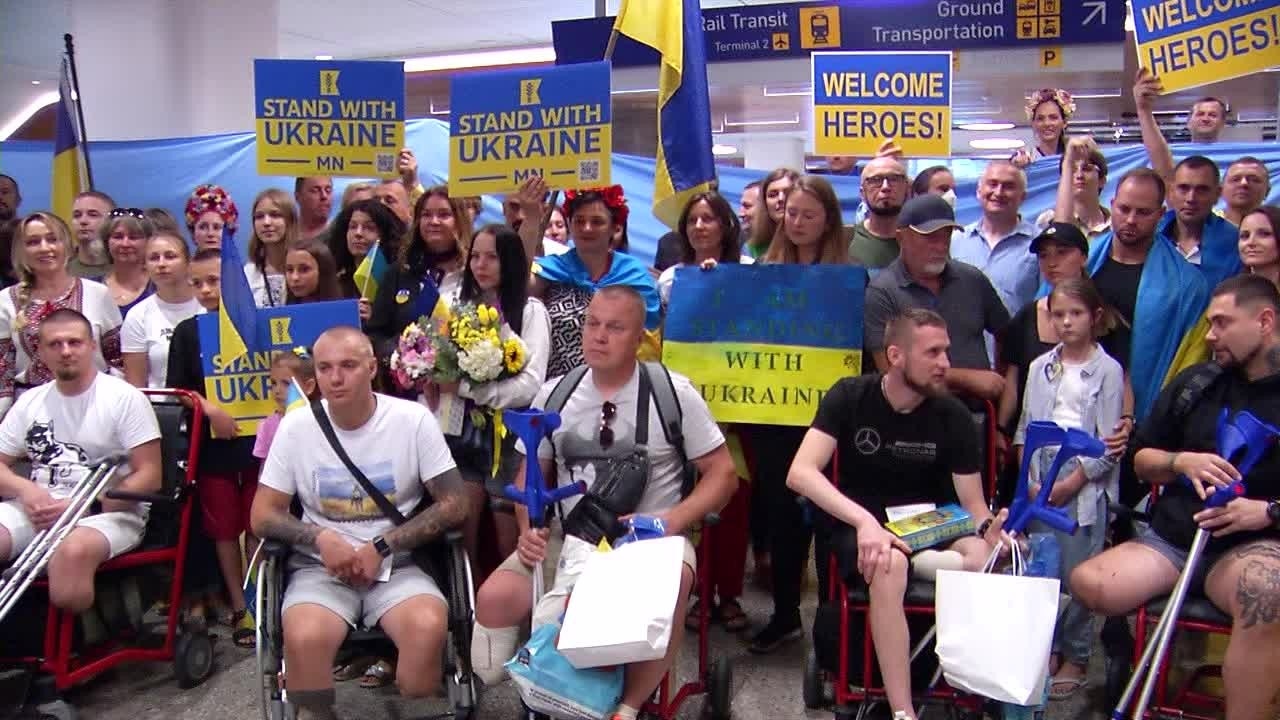 “It’s sad realizing that they lost their limbs, but at the same time, they’re going to have a chance to be able to walk again,” says Maryna Ierokhina from Eden Prairie. “They’re going to help our heroes.”

For Ukrainians who now call Minnesota home, this visit has deep meaning.

These men, all amputees, were injured while defending their homeland. The soldiers say they are grateful.

“I feel myself good, I’m very thankful,” says Andrey, who spoke with 5 EYEWITNESS NEWS with the help of a translator. “Our flight was very fine, but I’m very tired. Everything is good.”

Minneapolis Limb Lab prosthetist Yakov Gradinar says he hopes to begin fitting the soldiers with prostheses in the next few days.

“I’m really excited to see the people who defend my country and my parents and siblings,” Gradinar declares. “I’m ready … to help these people and do my small part to show the support and show them my respect for everything they’ve done by suffering in this war.”

We asked Denys, one of the soldiers, if he was pleased about getting a quality prosthetic in Minnesota.

“Yes, very much. I was waiting for this moment for quite some time,” he smiled. “I’m OK, but I’m tired of the flying. I just want to shower and get some rest, but I’m very happy.”

The Protez Foundation, a Minneapolis nonprofit, raised the funds for the soldiers’ transportation and treatment.

The effort is part of a project called Prosthetics for Ukrainians. The idea Is to bring Ukrainians to Minnesota to be fitted for prostheses, all free of charge.

Meanwhile, Minnesota’s Ukrainian community is donating housing, food, and other services. The Ukrainian-American Community Center in Minneapolis plans to host a fundraising dinner on Aug. 7 where people can meet and greet the soldiers.

On this night, it’s more than a visit. It’s a kind of homecoming for these wounded warriors.