Mayer Lutheran is the first team to solve the riddle of Minneota’s defense during the 2021 season. They did so by turning to its own defense.

The Crusaders limited the Vikings to a season-low scoring output and made key defensive stops in the late-going to record a 20-14 victory over Minneota in the Class A championship game on Friday, Nov. 26 at U.S. Bank Stadium. Senior fullback Cole Neitzel scored two touchdowns, including the lone one in the second half to spur Mayer Lutheran (13-1) to a memorable finish in its first-ever appearance in a Prep Bowl championship game. The 20 points were not only enough for the Crusaders, but was the most points allowed to a Minneota (13-1) all season. In fact, Minneota had surrendered just 33 points entering the game.

Mayer Lutheran generated 297 yards of total offense led by a team-approach running game that produced 155 yards rushing and another 142 yards through the air from senior quarterback Ty Hoese. But just as important were those timely offensive performances were that of the Crusaders’ defense. The Vikings, who had scored at least 31 points in 10 of their games this season was limited to 192 yards of total offense.

Minneota had two possessions in the final minutes in an effort to rally, but each was turned back by a stingy Mayer Lutheran defense. Senior linebacker Elijah Jopp had 14 tackles and a sack while Neitzel, also a linebacker, contributed nine tackles.

Mayer Lutheran took the second half kickoff and drove 74 yards in 10 plays, a possession that was capped by Neitzel’s second touchdown of the game. His scoring run came on a 4th-and-1 play from the six-yar line with 8:09 remaining in the third quarter. While he made the first down, he went the entire distance dragging defenders with him. That gave the Crusaders their second lead of the game at 20-14. To that point, it was the most points allowed by Minneota all season. 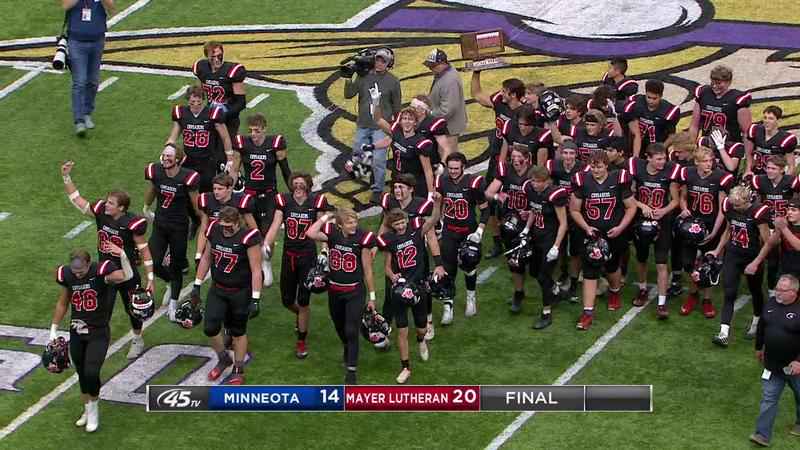 Mayer Lutheran celebrates their Class 1A state championship at the Prep Bowl.[KSTC/45TV]

Minneota closed out the first half on a 22-yard scoring strike from junior quarterback Isaac Pohlen to senior running back Jonah Gruenes with 31 seconds remaining in the second quarter.

Earlier, Mayer Lutheran scored two touchdowns 20 seconds apart to build a 13-7 advantage. The Crusaders began the quick run on a 41-yard completion from senior quarterback Ty Hoese to senior running back Samuel Dennis. After a quick change of possession, Neitzel scored on a 13-yard run to give the Crusaders their first lead.

Minneota was attempting to add to its football legacy that includes seven championships in 15 state tournament appearances.