Mankato West’s one-year wait is over.

The top-ranked Scarlets were undefeated during a pandemic-influenced 2020 high school football season and didn’t have a chance to build on that with a canceled postseason. Keeping that focus on 2021 and a renewed opportunity, Mankato West zeroed in on another season capped with a Class AAAAA championship. That quest was completed Saturday, Nov. 27 with a 24-10 victory over Mahtomedi in the title game at U.S. Bank Stadium.

Balance on offense carried Mankato West, which had 265 total yards: 135 on the ground and 130 through the air. Senior quarterback Alexander Dittberner threw two touchdown passes and had seven different receivers. He also rushed for 48 yards. Senior running back Walker Britz had a team-best 56 yards in the balanced attack that held the ball seven minutes longer than Mahtomedi (10-3).

The Scarlets pulled away with 10 unanswered points in the second half after the Zephyrs had pulled to within 14-10 with 8:30 left in the third quarter. Senior tight end Gibson Blackstad hauled in a 13-yard scoring strike from Dittberner with 1:40 remaining in the third quarter. When Mahtomedi couldn’t close the gap, Mankato West extended the lead on a 35-yard field goal from senior kicker Drew Smook. 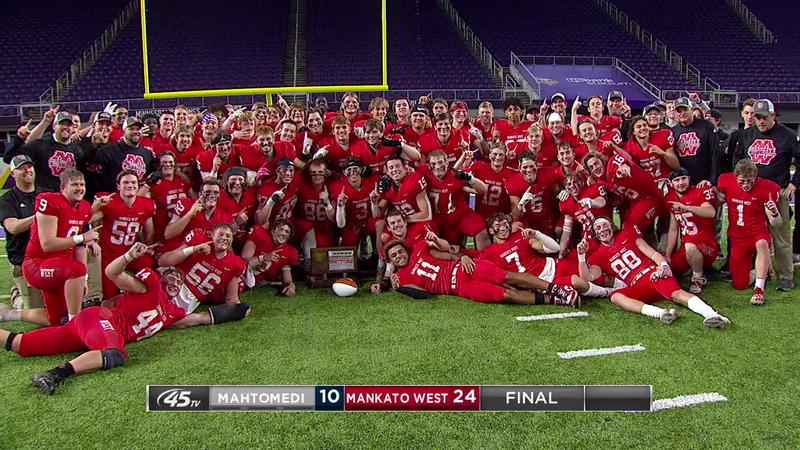 Mahtomedi pulled to within 14-10 on the opening possession of the second half. The Zephyrs traveled 84 yards in eight plays, capped by a 1-yard run from senior running back Jordan Hull.

Mahtomedi senior kicker Joseph Heinsch trimmed the deficit on a 31-yard field goal with 8:56 left in the second quarter.

It is the third runner-up finish in four Prep Bowl appearances for Mahtomedi.