Hutchinson was off and running Friday, Nov. 26 and the Tigers didn’t slow down until they had another football championship trophy in tow.

The Tigers’ power running game produced 423 rushing yards and six touchdowns en route to a 42-14 victory over Kasson-Mantorville in the Class AAAA championship game at U.S. Bank Stadium. It is the sixth state championship for Hutchinson (12-1) in seven title-game berths. Hutchinson last won a Class AAAA crown in 2013 when it captured the second of two in a row. During Hutchinson’s three state tournament games in 2021, it outscored the opposition 118-20.

And they did it all by using its trademark running attack. Hutchinson’s ball-control attack held possession for nearly 29 minutes and averaged 7.7 yards per try.

Hutchinson rolled up 289 rushing yards on 27 carries in the first half when it built a 28-7 lead. Followers of the Minnesota State High School League’s record book started sleuthing to see what the Prep Bowl record was for team rushing yards and if that might be in the Tigers’ sights with an equally impressive running effort in the second half. But the Tigers were 146 yards shy of the record mark of 569 team rushing yards set by Stephen-Argyle Central in 2009. 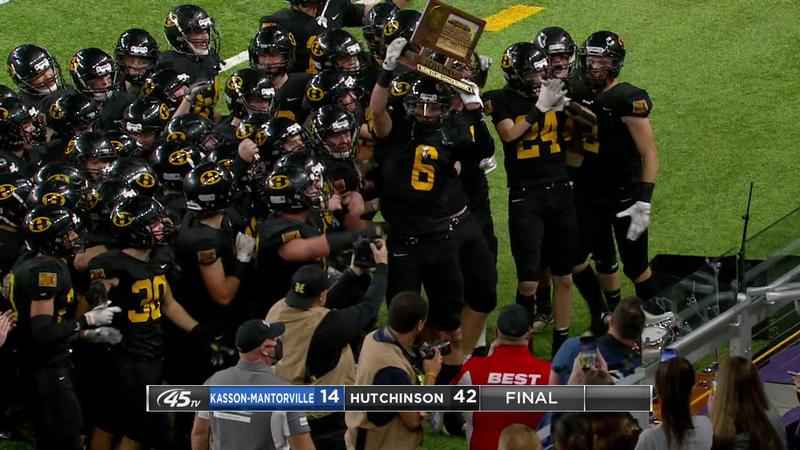 Piehl fueled the Tigers in the first half with 107 yards on three carries. The bulk of that production came on a 90-yard run on an end-around down the far sideline that resulted in a near-entry in the Prep Bowl record book. His trip to the endzone was two yards short of the Prep Bowl record set by Hutchinson’s Robbie Grimsley in the Tigers’ 49-7 romp over Holy Angels in the Class AAAA championship game in 2013.

Piehl’s touchdown dash gave the Tigers a 20-0 lead early in the second quarter. Three minutes later, Kasson-Mantorville senior quarterback Matthews Donovan scored an a 30-yard run to put the KoMets on the scoreboard. But Hutchinson closed out a dominant first half on a 12-yard scoring run by Elliott. He had scored the opening touchdown on a 40-yard run late in the first quarter. Elliott finished with 96 yards on nine carries.

Donovan paced the KoMets (9-4) in the first half with 84 yards rushing and another 27 through the air. He finished with 101 yards rushing and senior running back Anthony Moe-tucker added 85 yards and a second-half touchdown. The KoMets were attempting to win their first football championship in 11 state tournament trips.