If you looked away for just a moment in the final minutes of the Class AA football championship game between Chatfield and West Central Area/Ashby, you ran the risk of missing out on drama that was draining to players and fans alike.

The dramatic back-and-forth finally ended when Chatfield junior defensive back Isaac Erding intercepted a pass to halt West Central Area/Ashby’s last-ditch attempt and to secure a 14-13 victory on Friday, Nov. 26 at U.S. Bank Stadium. It is the fifth championship in nine state tournament appearances for the Gophers (13-1) and first since 2013. Chatfield scored all the points it needed in the first half and turned the rest over to the defense, which limited the Knights (11-2) to a fourth-quarter touchdown.

The topsy-turvy fourth quarter went into high gear when West Central Area/Ashby senior running back Mattson Hoff gained five yards on a carry and then lost the ball. The fumble was returned 74 yards the other way for an apparent touchdown by Chatfield junior defensive back Elijah Hopp. But the fumble was overturned by replay evidence when it was determined that Hoff was ruled down before the fumble. The Knights continued the drive and called it with a 1-yard touchdown run by senior quarterback Evan Paulson to draw the Knights to within 14-13. Seconds later, the West Central Ashby/Area fans roared with delight when junior running back Anthony Sykora was awarded a successful two-point conversion run. 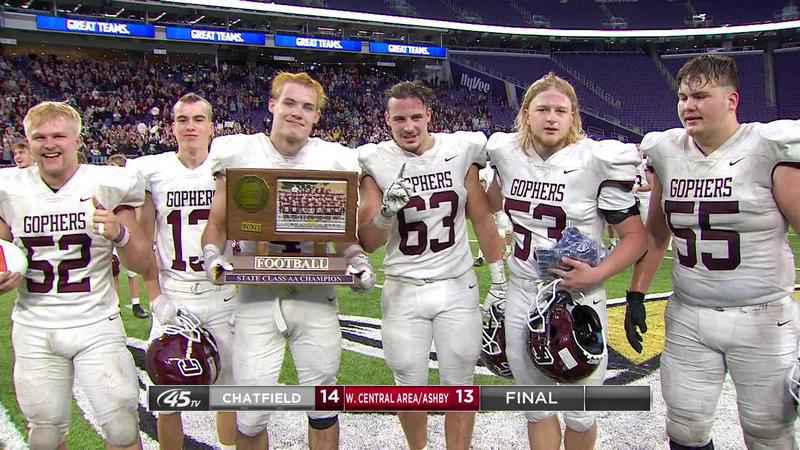 Members of the Chatfield high school football team pose with the Class 2A state championship trophy at U.S. Bank Stadium.[KSTC/45TV]

Chatfield built a 14-7 lead at the break thanks to a 31-yard fumble return for a touchdown by junior defender Carter Daniels with 7:52 remaining in the second quarter. Daniels had five tackles in the first half while senior lineman Ethan Ruskell had four tackles, including 1 ½ for loss.

West Central Area/Ashby climbed into a 7-6 lead with 3:06 left in the first quarter behind a 30-yard touchdown connection between senior quarterback Evan Paulson and junior wide receiver Cole Anderson. That TD strike came just more than four minutes after sophomore quarterback Parker Delaney opened the scoring for the Gophers on run from six yards.

West Central Area/Ashby generated 136 yards of total offense in 30 plays in the first 24 minutes of play. Conversely, Chatfield was close behind with 124 yards, also in 30 plays. Delaney had the longest running play of either team in the first half with an 18-yard scamper. He had seven carries for 38 yards and averaged 5.4 yards per try.

West Central Area/Ashby, making its fourth appearance in the state tournament, was attempting to win a championship for the first time. In 1999, it finished as the Class AA runner-up.