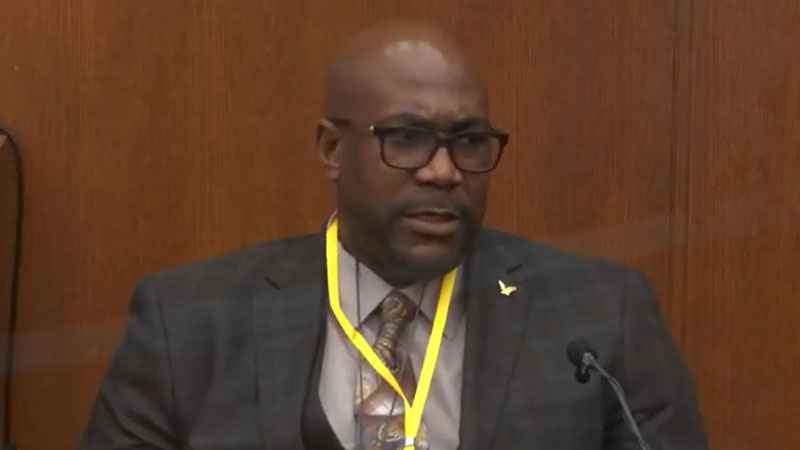 The court has adjourned for the day.

The court has reconvened.

Schleicher asks about duty to render aid and preserve life.

Stoughton, "…the sanctity of human life is the highest priority in policing – that’s absolutely generally accepted in policing."#DerekChauvinTrial

Stoughton: …just seeing an officer interact with someone does not provide nearly enough context understand well the, the context of that interaction. #DerekChauvinTrial

Stoughton wrote a statement that says a knee should only remain on the upper back until a person is handcuffed and no more.

Stoughton: What you’re describing is risk, right, the idea that they could potentially become a threat that that’s the very definition of risk. Yes, and officers can do a range of things to mitigate risk…they can’t use force to address risk. #DerekChauvinTrial

The court is in recess for 20 minutes.

After Philonise was excused, state prosecutor Steve Schilecher calls Seth Stoughton to the witness stand. Stoughton is a University of South Carolina School of Law professor and is a use of force expert.

Stoughton is an associate professor at Univ. South Carolina school of law & is also an affiliate w/ the Dept. of criminology & criminal justice. #DerekChauvinTrial pic.twitter.com/7WDM1cYkuV

Prior to his career in law, Stoughton was previously a law enforcement officer in Florida, including time spent with the Tallahassee Police Department. He also served as an investigator in the Florida Department of Education. During that time, he finished his undergrad and then attended law school at the University of Virginia.

Stoughton says he has been retained as an expert witness about 60 times.

Schleicher asks Stoughton if being hired leads him to an opinion.

Stoughton: My, my credibility is very important to me. And if I am retained and develop an opinion that does not favor the attorney who retains me, that’s still my opinion. #DerekChauvinTrial

Stoughton was asked what factors he uses when reviewing use of force incidents.

"… Applying generally accepted police practices, what we might call a national or professional standard for the way we expect … officers to engage with individuals and use of force," he said.

He also explained the different types of resistance and what an officer comes across.

Now playing another clip. You can hear a bystander saying he’s passed out and an officer says “I think he’s passing out.” #DerekChauvinTrial pic.twitter.com/14yZB0fRXo

Stoughton also testified that there was no reason to pin Floyd to the pavement on his stomach because he was handcuffed, already had been searched and didn’t pose a threat of escape or harm to the officers.

"I don’t see him presenting a threat of anything," Stoughton said. "There’s no specific, articulable facts that … a reasonable officer in the defendant’s position could use to conclude that he had the intention of causing physical harm to the officers or others."

Stoughton’s testimony — including that officers should have known that pressing a knee to someone’s neck could cause serious injury or death — is similar to that offered by previous witnesses. But it gave prosecutors a chance to again play several snippets of body-camera video of Floyd’s pleas for help.

Cahill denied a motion from the defense to have the prosecution explain why they are not granting immunity in regards to Morries Hall. The next witness — Philonise Floyd, George Floyd’s brother — takes the witness stand.

The state is asking questions about George to Philonise.

Philonise says his brother played basketball. His jersey number was 5 in this photo. #DerekChauvinTrial pic.twitter.com/fMFeqaKmWk

He tells the court his brother was a big sports enthusiast growing up. Philonise also said George was very close to their mother.

"It was one of a kind … he was a big mama’s boy … he showed us how to treat our mom and how to respect our mom, he just loved her so dearly," he said.

The defense declines to cross-examine this witness, having him excused.

On Monday, the Derek Chauvin murder trial continues, with Hennepin County Judge Peter Cahill refusing to sequester the jury sooner than anticipated due to a fatal shooting caused by police in Brooklyn Center.

Dr. Jonathan Rich, a cardiologist at Northwestern Memorial Hospital in Chicago, was called to the witness stand during the morning session. He stated that Floyd had died from a cardiopulmonary arrest caused by low oxygen levels. He told the court he can state with a "high degree of medical certainty" that Floyd did not die from a primary heart condition or a drug overdose.

The state prosecution team is expected to call two more witnesses to the stand and Cahill mentioned the court would be adjourned for the day around 4 p.m.