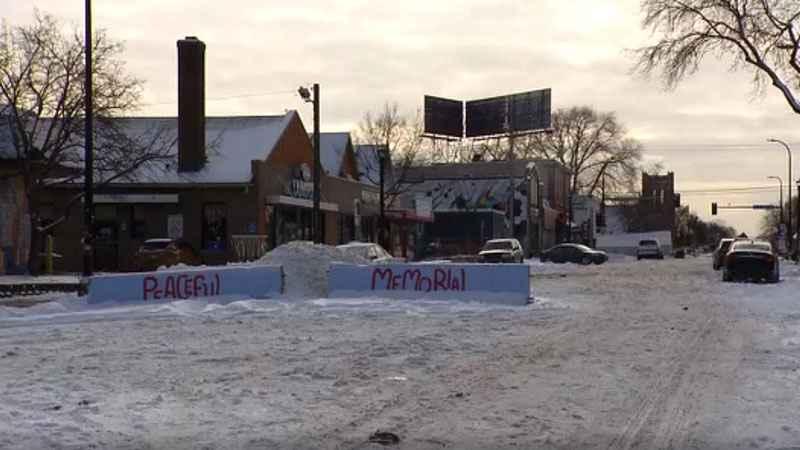 In a searing statement posted to social media on Tuesday, Minneapolis City Council President Lisa Bender gave Mayor Jacob Frey an ultimatum on removing the barriers around the George Floyd memorial: Use your authority, or the council will step in.

The intersection of 38th Street and Chicago Avenue was blocked off shortly after Floyd’s death in police custody to preserve the area as a site of healing for the community. Since then, city leaders have met with members of the community to forge a path forward, but no timeline had ever been set.

"Mayor Frey says ‘clearly we need a decision’ about removing the barriers that block the intersection but the Mayor has both the responsibility and authority to make that decision based on over 80 community meetings that have taken place since May," Bender said in the statement.

Bender said a decision had been made to clear the barricades in August that was later withdrawn, even though Frey had full authority as mayor to clear the area without city council approval.

She added that if Frey refused to use his mayoral powers to reopen the intersection, she would set it in motion using the City Council’s legislative process. According to the statement, Frey wanted to send a letter of approval signed by city council members to community leaders before reopening the area, but Bender called that "an end-run" around both the mayor’s powers and the city council.

Mayor Frey along with council members Cano and Jenkins released a statement in response Wednesday afternoon saying in part,

"Minneapolis would benefit greatly from City leadership willing to come together. I’ve spent months working with Council Vice President Jenkins and Council Member Cano and have repeatedly attempted to do so with the Council President, to no avail," said Frey. "Refusing to engage in good faith conversation around the future of the intersection or even offer a position, and then presenting this as a ‘mayor or council’ issue – and not a Minneapolis issue – amounts to an attempt to challenge decisions after the fact without taking responsibility now. Avoidable divergence among those entrusted with leading our city could compromise not only our community efforts, but the public’s trust in local government. Let’s unite and get this done."

"I am very clear that the resolution to this issue requires broad, sweeping and transformational change," said Council Vice President Jenkins. "It cannot be done by one of us, or some us, but all of us working together. The community, the city council and the Mayor. I stand ready and willing to do my part."

"Hundreds of neighbors and small business owners who are directly impacted have reached out to us, pleading for help," said Council Member Cano. "As elected leaders, we have an obligation to hear these communities. Residents want to see our local government working together to take action that supports the safety and healing of this community."

Additionally, the statement says that the City Attorney’s Office has briefed elected officials on the question of city authority over the intersection.

In previous discussions, city leaders have cited accessibility for city services such as first responders, public transit and snowplows as paramount for reopening the intersection.

Business owners in the area have said the barricades have been a sore spot for their business as well. The owner of Cup Foods has threatened to sue the city over a loss of business, and the owner of an auto shop in the area said first responders were blocked from reaching him when he was assaulted at his business, though community leaders have disputed that claim.

"What happened at 38th and Chicago last May to George Floyd was a tragedy and it deeply affected each and every elected official, department, and citizen in Minneapolis. In short, it has touched our entire Minneapolis community and has spurred all of us to action in order to ensure that such a tragedy does not happen again in our city.

"With regard to the future of the intersection of 38th and Chicago and the community surrounding it, everyone in city government needs to play a role given the enormity of this context. The Charter, nor any city ordinance, does not decree that one entity, department, officeholder or staff member has the primary or sole authority to mandate a future for 38th and Chicago. To be more specific, the City’s authority over the public right-of-way (ROW) is extensive and broad. Such vast authority is designed to facilitate travel. Without proper authorization (permit), any obstruction of the ROW is illegal. There are several Public Works-ROW ordinances, traffic ordinances, and traffic laws clearly on point. However, given the unique circumstances here, Public Works cannot reasonably be expected to act alone.

"In normal practice, the City Council does not specifically authorize or weigh in on each and every exercise of these powers by a City department. That would not be feasible or warranted in normal circumstances. Enforcement activity related to the ROW is conducted all the time at the discretion of several different City departments, including Public Works, Police, Regulatory Services, and City Attorney (criminal prosecution).

"So, while specific authorization from the City Council is not necessary for most enforcement efforts, the situation at 38th & Chicago is anomalous and is clearly unprecedented. To the extent City action is needed to open and maintain the ROW for its intended purpose (easement in favor of the general public for transit), it will necessarily involve a coordinated effort between multiple departments, including at a minimum, Public Works and Police. In addition, it will potentially require the assistance and intervention of non-City law enforcement, Public Works, or other similar agency partners, all of which may require City Council approval. It is also clearly not a police operation alone, such that the City Council can abdicate any responsibility. City code reflects this broadly delegated authority, but also states that the City Council (primarily in terms of its oversight over Public Works as primary stewards of the ROW) are where this power is rooted.

"As a result, when considering the potential consequences of any decision directly affecting the short term and long term future of 38th and Chicago, City department leadership reasonably feel that they must have the full support of the City, including all elected officials and community, before action is taken here. City enterprise support in this context would be reflective of some sort of voiced consensus among elected official leadership on the City Council and by the Mayor."