Vice President Harris: A new chapter opens in US politics

Vice President Kamala Harris broke the barrier that has kept men at the top ranks of American power for more than two centuries when she took the oath Wednesday to hold the nation’s second-highest office.

Harris was sworn in as the first female U.S. vice president — and the first Black woman and person of South Asian descent to hold the position — in front of the U.S. Capitol by Supreme Court Justice Sonia Sotomayor. Later, she presided as Senate president for the first time to swear in three new Democratic senators, including her replacement.

Dr. Verna Cornelia Price was watching with her 84 year old mother, husband and children. Her mother woke her up early to take in the historic moment.

“You see my smile? You see my smile?” said Dr. Price, excited as she spoke of the inauguration. “[Harris is] coming down and I jump up off the couch, I stand to attention I’m like ‘She’s coming through these doors, yes she is!’ It meant so much!” 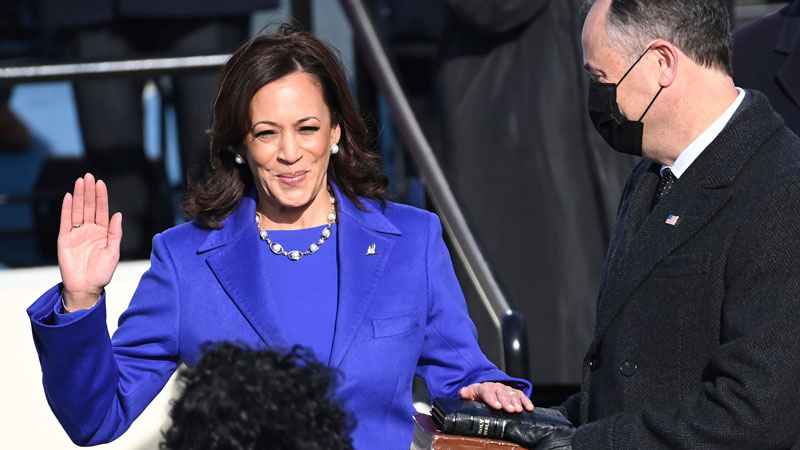 Kamala Harris is sworn in as vice president by Supreme Court Justice Sonia Sotomayor as her husband Doug Emhoff holds the Bible during the 59th Presidential Inauguration at the U.S. Capitol in Washington, Wednesday, Jan. 20, 2021.[Saul Loeb/Pool Photo via AP]

She has two daughters, a 12 year old and an 18 year old. One watched the inauguration with her, the other watched from her dorm room at college.

Dr. Price has spent years mentoring middle and high school girls through her program Girls Taking Action. The leadership and empowerment program connects 6th through 12th graders with women leaders who meet with the girls every week. She also provides the girls a career coach to help them meet their goals.

The program has expanded from Minnesota to Atlanta, Liberia, Kenya, Ghana and Guatemala.

“We teach our girls, you were born with power and you have enough power right now to change your life and your world and for me that is what Kamala Harris has done,” said Dr. Price. “She has taken everything in her life and she has owned her own personal power.”

Nadvia Davis is an alumni of the program. The 31 year old grew up in North Minneapolis.

“I was just thrilled to hear about her being sworn in and taking the oath,” said Daivs. “It’s an exciting moment for people of color, we get to finally see more of a woman’s presence in the Oval Office and not just like someone who is an assistant, we have someone who is actually going to be implementing policies […] and making a difference with her opinions and her decisions. It was exciting to see that come to life. I think today was just the start, one exciting moment for women of color all around the world.”

Davis told 5 EYEWITNESS NEWS it opens opportunities for other young women, giving them a path to follow.

“If I were watching this in high school, it would’ve been a potential career to look at,” said Davis. “It just seemed unfathomable, something you couldn’t even dream of because for so long, tradition had shown us it was men in these positions and white men, frankly.”

“[Harris is] really again demonstrating what it means to be powerful, she’s living out the affirmations some of these girls say on the regular.”

MK Yang, who grew up on St. Paul’s east side and is also an alumni of Girls Taking Action, agrees.

“This is definitely a stepping stone for a lot of us girls, especially those who I would say were born with no supports, especially those who had no one to look up to,” said Yang. “Now they know okay, there’s a path I can take […] there’s going to be a lot of barriers that I need to break but at least I have the first stone down.”

“In a very indescribable way,” said Yang. “Thinking about how the future is going to change, how it’s going to look, I just smile.”

Both Yang and Davis agree this will also inspire young women to aim for the presidency as well.

“I think some girls might take todays’ inauguration and say Kamala set the bar high, I can go one step further,” said Davis.

Dr. Price said young women also have a new role model in Amanda Gorman, who presented her poem The Hill We Climb during the inauguration.

“Here she is, a deep chocolate brown, African American sister, just brilliant,” said Dr. Price, calling her performance exquisite. “She embodied a young African-American woman, understanding she has the power to change herself, her community, her world. Today she did and I clapped all the way through.”

The swearing-in of Vice President Kamala Harris was meaningful for women throughout Minnesota.

"As I think about this day it really is about perseverance and resilience, that’s what this day means," Dana Mitchell, Vice President of the Minnesota Association of Black Lawyers (MABL), said.

Little girls like 5-year-old Mia and 6-year-old Ava, who have been hearing about this day from their mom for years.

"I’ve talked to them a lot about, you know, Kamala Harris, about who she is and what is happening and how momentous it is," Roberta C. Emerson said.

Emerson said seeing not only a woman in such a prestigious role, but a woman of color makes what was once just a dream, a reality for her two daughters.

"If you’re not seeing what you can be, it’s hard to believe anybody saying that, even your mom, so for them, they get to see it now, so not only am I saying it, it’s in front of them," Emerson said.

It’s a door now opened, and one these women hope stays that way.

"Sometimes men are able to go into spaces that women have not and so women have been trying to break this particular barrier for so very long," Stamps-Smith said.

"I like what she said when she was first elected, she’s the first but she won’t be the last," Mitchell added.

Biden takes the helm as president: ‘Democracy has prevailed’

The moment was steeped in history and significance in more ways than one. Harris was escorted to the podium by Capitol Police Officer Eugene Goodman, the officer who single-handedly took on a mob of Trump supporters as they tried to breach the Senate floor during the Capitol insurrection that sought to overturn the election results. Harris was wearing clothes from two young, emerging Black designers — a deep purple dress and coat.

After taking the oath of office, a beaming Harris hugged her husband, Douglas Emhoff, and gave President Joe Biden a first bump.

Her rise is historic in any context, another moment when a stubborn boundary falls away, expanding the idea of what’s possible in American politics. But it’s particularly meaningful because Harris is taking office at a moment when Americans are grappling over institutional racism and confronting a pandemic that has disproportionately devastated Black and brown communities.

Those close to Harris say she’ll bring an important — and often missing — perspective to the debates on how to overcome the many hurdles facing the new administration.

"In many folks’ lifetimes, we experienced a segregated United States," said Lateefah Simon, a civil rights advocate and longtime Harris friend and mentee. "You will now have a Black woman who will walk into the White House not as a guest but as a second in command of the free world."

Harris — the child of immigrants, a stepmother of two and the wife of a Jewish man — "carries an intersectional story of so many Americans who are never seen and heard."

Her family joined her on stage as she took the oath and later during her procession to her new office building near the White House. She was led by her alma mater Howard University’s marching band and walked while holding the hand of her grandniece and alongside her husband, stepchildren, sister, brother-in-law and nieces.

She will address the nation Wednesday evening from the Lincoln Memorial.

Harris, 56, moves into the vice presidency just four years after she first came to Washington as a senator from California, where she’d served as attorney general and as San Francisco’s district attorney. She had expected to work with a White House run by Hillary Clinton, but President Donald Trump’s victory quickly scrambled the nation’s capital and set the stage for the rise of a new class of Democratic stars.

After Harris’ own presidential bid fizzled, her rise continued when Biden chose her as his running mate last August. Harris had been a close friend of Beau Biden, his elder son and a former Delaware attorney general who died in 2015 of cancer.

The inauguration activities included nods to her history-making rise and her personal story.

Harris used two Bibles to take the oath, one that belonged to Supreme Court Justice Thurgood Marshall, the late civil rights icon whom Harris often cites as inspiration, and Regina Shelton, who helped raise Harris during her childhood in the San Francisco Bay Area.

After the ceremony, she and Emhoff escorted former Vice President Mike Pence and his wife, Karen Pence, out of the Capitol, a gesture that would normally be performed by the incoming and outgoing presidents, but Trump did not attended the inauguration. Harris, Pence and their spouses spoke for several minutes before the Pences departed.

To celebrate the occasion, the Alpha Kappa Alpha sorority, the nation’s oldest sorority for Black women, which Harris joined at Howard University, declared Wednesday as Soror Kamala D. Harris Day. Members of the sorority watching the celebrations across the country were clad in pearls, as was Harris, and the sorority’s pink and green colors.

"There is a pride I can’t put into words," said Elizabeth Shelby, a member of the sorority’s Alpha Psi chapter, who watched from her home in Nashville, Tennessee. "It is such a joy to see her rise to this place in our country. It is such a joy to know that she is one of us, that she represents us."

Biden, in his inaugural address, reflected on the 1913 march for women’s suffrage the day before President Woodrow Wilson’s inauguration, during which some marchers were heckled and attacked.

As vice president, Harris will expand the definition of who gets to hold power in American politics, said Martha S. Jones, a professor of history at Johns Hopkins University and the author of "Vanguard: How Black Women Broke Barriers, Won the Vote, and Insisted on Equality for All."

"Folks are going to have to adapt to her rather than her adapting to them," Jones said.

Her election to the vice presidency should be just the beginning of putting Black women in leadership positions, Jones said, particularly after the role Black women played in organizing and turning out voters in the November election.