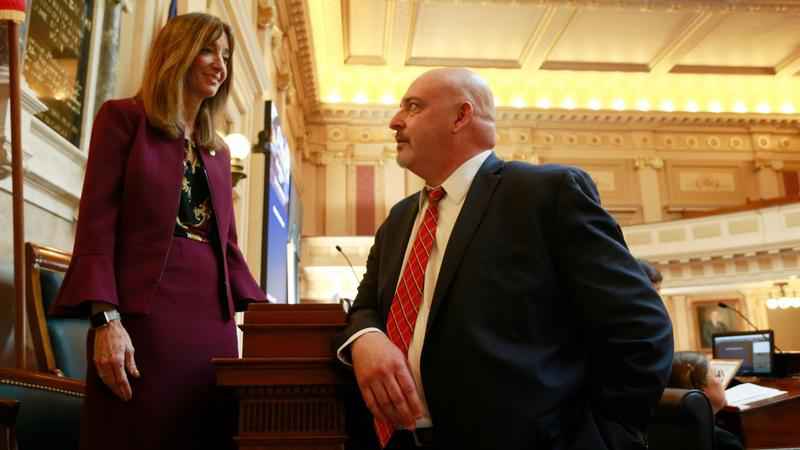 FILE - In this Thursday, Jan. 9, 2020, file photo, Virginia House Speaker Eileen Filler-Corn, D-Fairfax, left, talks with House Minority Leader Del. Todd Gilbert, R-Shenandoah, during the House session at the Virginia State Capitol in Richmond, Va. Democratic control of Virginia state government over the past two years has allowed lawmakers to dramatically reshape public policy with legislation reforming the criminal justice system, loosening abortion restrictions and expanding voting access. In the Nov. 2, 2021, election, the balance of power in the 100-seat House of Delegates is on the line.[AP Photo/Steve Helber, File]

Republicans have won at least 50 seats in the Virginia House, ensuring at least a tie with Democrats who had fought to retain control.

Every Republican House incumbent won reelection, including eight whose seats were uncontested. The party flipped at least five Democratic seats, including those in two of the last remaining districts held by Democrats in predominantly rural districts. Several races were still too early to call, but the GOP also declared victory in some of those, with party leaders saying they were confident they had flipped control of the House.

The Republican gains are part of a seismic win for the GOP in Virginia, as Republican businessman Glenn Youngkin captured the governor’s office and Republican Winsome Sears won the lieutenant governor’s race in Tuesday’s election. Youngkin defeated former Virginia Gov. Terry McAuliffe, while Sears beat Democrat Hala Ayala. She will become the state’s first female lieutenant governor and the first woman of color to win statewide office in Virginia.

One down-ballot statewide race is still too close to call. Incumbent Attorney General Democrat Mark Herring is seeking a third term against Republican Jason Miyares, a delegate from Virginia Beach.

Tuesday’s election was seen as a referendum on a series of progressive reforms that Democrats have enacted over the past two years, including the repeal of the death penalty, the legalization of marijuana, a loosening of abortion restrictions. and a series of police reforms.

Republicans criticized a series of progressive policies promoted by Democrats to try to convince voters that once-conservative Virginia has moved too far to the left, including the repeal of the death penalty, the legalization of marijuana, a loosening of abortion restrictions and a series of police reforms.

Democrats held a 55-45 majority heading into Tuesday’s election, but Republicans waged an aggressive campaign to flip up to 13 seats held by Democrats whom they considered vulnerable. The GOP needs to flip at least six seats to regain the majority the party lost in 2019. Democrats still hold a slim 21-19 majority over Republicans in the Senate. Senators are not up for reelection until 2023.

Garren Shipley, a spokesman for House Republican Leader Todd Gilbert, said Republicans believe they have flipped several seats in races where vote tallies show the two candidates extremely close, including in District 85 in Virginia Beach, where Democratic Del. Alex Askew was ahead of Republican challenger Karen Greenhalgh by less than 100 votes.

Gilbert said in a statement Wednesday that Republicans believe Greenhalgh has won the race by more than 200 votes.

“We are very confident that there will be 52 Republicans seated when the House convenes in January,” Shipley said.

House Speaker Eileen Filler-Corn acknowledged that the results were not what Democrats were hoping for but said there are still several tight races “that will determine the majority” as votes continue to be counted. The state Department of Elections has said that ballots postmarked by Nov. 2 will be counted through noon on Friday.

“We are going to make sure every Virginian’s voice is heard and every vote is counted,” Filler-Corn said in a statement.

In other tight races, first-term Democratic Del. Joshua Cole was defeated by Republican challenger Tara Durant in the 28th District, which includes the city of Fredericksburg and parts of Stafford County. In District 83, which includes parts of the cities of Virginia Beach and Norfolk, Republican challenger Tim Anderson, an attorney and gun shop owner, ousted Democratic incumbent Nancy Guy.

Republicans had controlled the House since 2000, but Democrats won back 15 GOP-held seats in 2017, helped by voter hostility toward then-President Donald Trump. In 2019, Democrats took full control of the legislature by wiping out slim Republican majorities in the House and Senate.