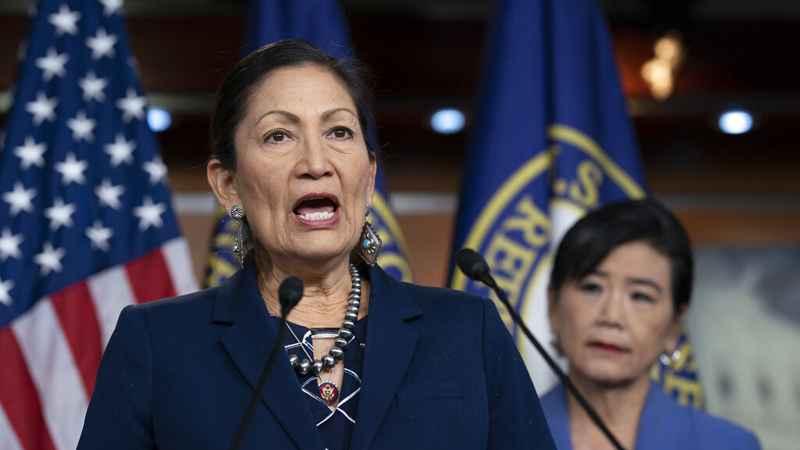 In this March 5, 2020, file photo Rep. Deb Haaland, D-N.M., Native American Caucus co-chair, joined at right by Rep. Judy Chu, D-Calif., chair of the Congressional Asian Pacific American Caucus, speaks to reporters about the 2020 Census on Capitol Hill in Washington. O.J. Semans is one of dozens of tribal officials and vote activists around the country pushing selection of Haaland to become the first Native American secretary of Interior.[AP/ J. Scott Applewhite]

A group of Native American tribes in a Minnesota congressman’s district is rebuking him for his attempts to derail President-elect Joe Biden’s pick for Interior secretary.

If confirmed, Rep. Deb Haaland, a Democrat from New Mexico, would be the first Native American to lead the Department of the Interior.

In a letter seeking support, Stauber cites Haaland’s opposition to oil and gas drilling on public land and her support for the Green New Deal, legislation that aims to address climate change and economic inequality.

"Nominating Representative Haaland is a direct threat to working men and women and a rejection of responsible development of America’s natural resources," Stauber wrote in his letter.

Policies like the Green New Deal "would place a moratorium on mining in Northern Minnesota, would severely and negatively impact every economic sector and family in Northeastern Minnesota," a statement from Stauber’s office said.

"This historic nomination is more important to us and all of Indian country than any other Cabinet nomination in recent history," the tribal leaders wrote in their letter. "Your opposition to the first and only American Indian ever nominated to a Cabinet position is likely to reverberate across Indian Country."

The Midwest Alliance of Sovereign Tribes, which represents 35 tribal nations in the region, also wrote to Stauber, calling the lawmaker’s campaign against Haaland "offensive, "hostile" and "irresponsible."

The chairman of the alliance, Aaron Payment, said Stauber had "subordinated the interests of Indian tribes to the interests of those you represent in your letter without any consultation with the tribes."

Haaland, a member of the Laguna Pueblo, serves with Stauber on the House Natural Resources Committee. If confirmed, she would lead a department with broad oversight over tribal lands in the U.S.