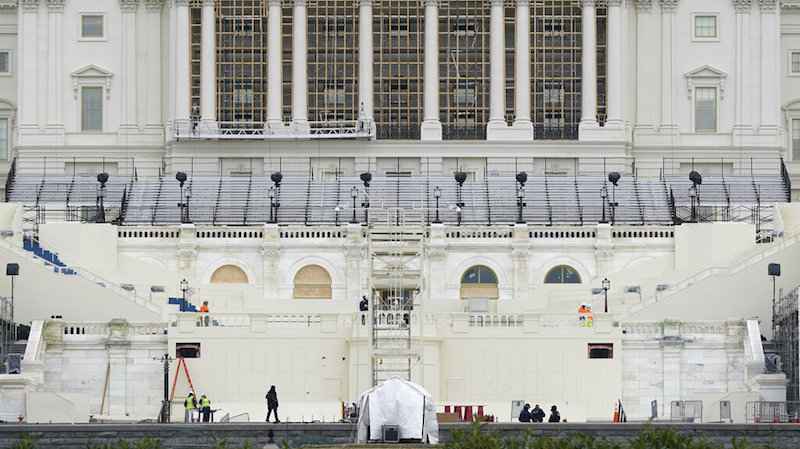 The inauguration of President-elect Joe Biden will be held on the same risers in the same spot at the U.S. Capitol where a violent, pro-Trump mob descended last week. But the two events aren’t even comparable from a security standpoint, said Michael Plati, U.S. Secret Service special agent in charge, who is leading the inauguration security.

The inauguration is designated as a “national special security event," which clears the way for communication, funding and preparation between multiple agencies in Washington, like the Capitol Police, Pentagon, Homeland Security and District-area police. Other such events are the State of the Union, the Super Bowl and the Democratic and Republican National Conventions.

Last week’s rally turned violent siege was viewed as a free speech event in the days before, despite multiple warnings about the potential for violence from right-wing extremist groups. Egged on by President Donald Trump and his repeated attempts to delegitimize Biden’s win, the violent mob marched from the White House to the Capitol, where they occupied the building for hours to try to stop lawmakers from certifying Biden’s win. Five people died, including a police officer. Two explosive devices were found, but they did not go off.

“I don’t want to use the expression that we’re comparing apples to oranges,” Plati said, but the event is planned over a year with contingencies, and they anticipate the possibility of extreme violence.

Biden himself hasn’t expressed concern about his own security at the inauguration.

“I’m not afraid of taking the oath outside,” he told reporters Monday. “It is critically important that there’ll be a real serious focus on holding those folks who engaged in sedition and threatening the lives, defacing public property, caused great damage — that they be held accountable.”

Law enforcement officials never go into too much detail about security so would-be attackers aren’t tipped off. But Plati said they’ve taken into account the siege: “It’s a poignant reminder of what can happen.”

And the inauguration will look different from other presidential inaugurations because of last week’s riot, with extremely tight security around the entire capital region. At least 10,000 National Guard troops will be in place by Saturday. Some will be obvious: officers in uniforms, checkpoints, metal detectors, fencing. Some won’t.

“There’s a variety of methods to ensure that we have a secure, seamless, safe environment for our protectees, but most importantly, the general public,” Plati said.

Acting U.S. Capitol Police Chief Yogananda Pittman said in a statement Monday that officials have “comprehensive, coordinated plans” in place to ensure safety and security. She said the grounds of the Capitol will be closed to the public. The inauguration is a ticketed event.

The Department of Homeland Security is setting increased inauguration security measures in motion earlier than scheduled, citing an “evolving security landscape” leading up to the event.

Acting DHS Secretary Chad Wolf said Monday, just hours before he announced his resignation, that he’s moved up the timing of the national special security event for Biden’s inauguration to Wednesday, instead of Jan. 19. He cited the “events of the past week,” along with an evolving security landscape.

Next week’s event was already going to be pared down because of COVID-19; Biden had asked supporters to say home and watch from afar. In keeping with crowd size restrictions to slow the spread of the virus, traditional activities like the parade and the inaugural balls will be virtual.

The theme for the event will be “America United,” an issue that’s long been a central focus for Biden but one that’s taken on added weight.

In an announcement shared first with The Associated Press, the Presidential Inaugural Committee said that the theme “reflects the beginning of a new national journey that restores the soul of America, brings the country together, and creates a path to a brighter future."

In keeping with the theme of unity, the committee also announced that after Biden is officially inaugurated, he, Vice President Kamala Harris and their spouses will lay a wreath at the Tomb of the Unknown Soldier in Arlington National Cemetery and will be joined there by former Presidents Barack Obama, George W. Bush and Bill Clinton and their wives. It will be one of Biden’s first acts as president, and a show of bipartisanship at a time when the national divide is on stark display.

Plati said they’re prepared for the group to shift to Arlington — and for the possibility of threats to shift with them.

Trump is skipping Biden’s inauguration, a decision Biden said was a “good thing,” though Vice President Mike Pence and his wife plan to attend.

One of the main problems last week was a lack of coordination by multiple agencies in the district, which won’t happen this time because those agencies have already been approved to work together and have been doing so for months, Plati said.

"We will have the adequate resourcing, personnel and plans in place," he said.

The National Park Service announced Monday that the Washington Monument would be closed until Jan. 24. But plans were still on for a major public art display spanning multiple blocks of the National Mall that will feature 191,500 U.S. flags and 56 pillars of light. The display is meant to symbolize every U.S. state and territory, and “the American people who are unable to travel” to the capital to celebrate.

Biden has focused on unity from the the start. And he’s said repeatedly since winning the White House that he sees unifying the country as one of his top priorities as president. But the scope — and urgency — of the challenge Biden faces became even clearer after the Capitol siege.

“This inauguration marks a new chapter for the American people — one of healing, of unifying, of coming together, of an America united,” said Tony Allen, CEO of the Presidential Inaugural Committee. “It is time to turn the page on this era of division. The inaugural activities will reflect our shared values and serve as a reminder that we are stronger together than we are apart, just as our motto ‘e pluribus unum’ reminds us — out of many, one.”