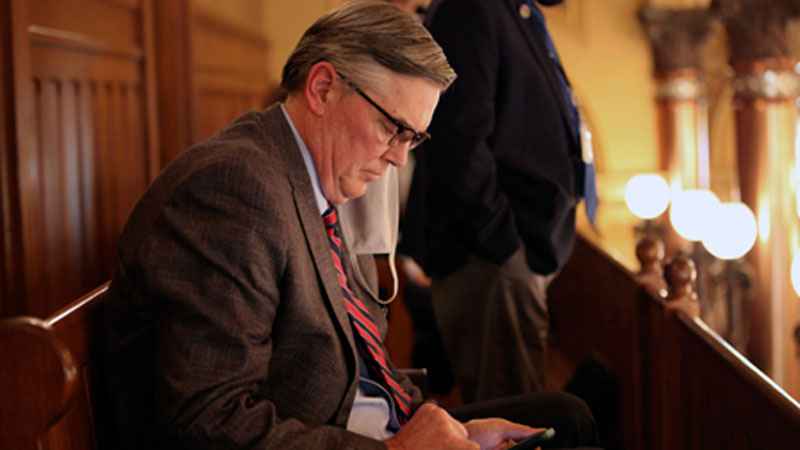 Chuck Weber, a lobbyist for the Kansas Catholic Conference, follows a state Senate debate on a proposed anti-abortion amendment to the state constitution from a Senate gallery, Thursday, Jan. 28, 2021, in Topeka, Kan.[AP Photo/John Hanna]

Republican legislators in Kansas on Thursday put a proposed anti-abortion amendment to the state constitution on the ballot for the state’s August 2022 primary election, hoping voters ensure that the state can keep imposing restrictions in line with anti-abortion groups’ wishes.

The Senate approved 28-11, a measure that overturns a Kansas Supreme Court decision in 2019 that declared access to abortion a "fundamental right" under the state’s bill of rights. Supporters had one vote more than the two-thirds majority necessary for approval of a proposed constitutional change.

The House approved the same measure last week with only Republican members’ support, and the same was true Thursday in the Senate. Approval by a simple majority of voters would change the Kansas Constitution, and the primary generally draws smaller and more conservative group of voters than a November general election.

The measure would add language to the Kansas Constitution declaring that it doesn’t grant the right to abortion and that the Legislature can regulate it in line with U.S. Supreme Court decisions. The measure would not ban abortion, but it would allow lawmakers to enact a ban if the nation’s highest court were to overturn its landmark 1973 Roe v. Wade decision protecting abortion rights.

Kansas would become at least the seventh state with language in its constitution saying the charter does not grant a right to abortion. Iowa lawmakers are considering a similar measure. The Kansas proposal is similar to ones approved by voters in Tennessee in 2014, West Virginia in 2018 and Louisiana in 2020.

Both sides were confident enough that the Kansas Senate would approve the measure that they had already begun previewing messages for what is likely to be an intense, monthslong campaign. Those messages included one from abortion rights supporters that adding the anti-abortion language to the state constitution would hurt the state’s economy.

Ahead of the Senate’s debate, Democratic Gov. Laura Kelly warned that enacting it would lead to boycotts of Kansas and discourage companies from relocating to the state. Kelly, a strong abortion rights supporter, said last year that the proposal would return the state "to the Dark Ages."

"There are a number of CEOs who really look to see what kind of inclusive policies we have in place that make it easier for them to recruit and retain a talented work force," Kelly said in a recent Associated Press interview. "It will be an economic development issue for us."

But the biggest threat to the measure’s approval in the Senate was too many GOP members being absent because of illness or personal reasons. Elections last year not only preserved GOP supermajorities in both chambers but made them more conservative.

"The people of Kansas have shown they are pro-life, and the election spoke volumes," said Jeanne Gawdun, lobbyist for Kansans for Life.

Gawdun’s group is the most influential anti-abortion group in state politics and generally favors an incremental approach to restricting abortion as federal courts give states more leeway.

Two decades’ worth of restrictions on abortion have been enacted in Kansas with bipartisan support. Kansas imposes a 24-hour waiting period ahead of an abortion, spells out what information providers must provide patients and requires most minors to notify their parents before terminating a pregnancy.

Abortion opponents expect to argue to voters that the amendment would allow the Legislature to regulate abortion as it had before 2019 and to warn that future state court decisions otherwise would strike down most restrictions. Abortion rights supporters already are testing a message that the measure is a big step toward an abortion ban.

Kelly likens the anti-abortion measure to North Carolina’s infamous and since-repealed 2016 "bathroom" law preventing transgender residents from using facilities in line with their gender identities, which prompted an economic backlash. In Kansas in 2014, a House-passed measure to protect people from lawsuits if they refused for religious reasons to provide services to LGBTQ people died in the Senate when some business leaders objected to it.

Sen. David Haley, a Kansas City, Kansas, Democrat and one of two Black senators, said enacting the amendment would assign women in Kansas to "a certain kind of slavery."

"I don’t want Kansas to continue to be that stigmatized," Haley said.

In 2019, Georgia’s enactment of a ban on most abortions, some movie producers and actors said they wouldn’t film in the state, but the major studios were quieter than they were about the North Carolina bathroom law.

And businesses and business groups have been silent so far on the Kansas anti-abortion proposal.

Alan Cobb, president and CEO of the Kansas Chamber of Commerce, said high taxes and burdensome regulations make Kansas less competitive and, "no, the (abortion) amendment will not hurt the state’s economic development."

"If you’re going to say unlimited abortion is helpful to your economic future, that’s kind of a problem," said Brittany Jones, advocacy director for the anti-abortion Family Policy Alliance of Kansas. "You’re essentially saying you want to build your economy on the back of abortion."