Greene regrets ‘words of the past’ without explicit apology 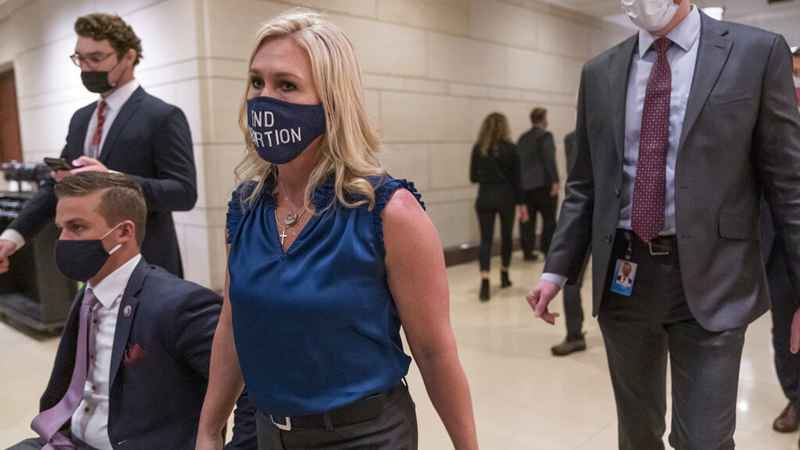 Embattled Rep. Marjorie Taylor Greene, facing a House vote to strip her of committee assignments, said Thursday that she regrets some “words of the past,” but she did not explicitly apologize for her racist and violent rhetoric.

Alternating between contrition and defiance, the newly elected Georgia Republican asserted in a House speech that she was “a very regular American” who posted conspiracy theories from QAnon and other sources before she began campaigning for Congress, but that those views did not represent her own.

She also looked to shift blame while falsely equating her own endorsement of violence against Democrats with those in the party who supported racial justice protests over the summer, which sometimes turned violent.

She pronounced the media “just as guilty as QAnon of presenting truth and lies.” QAnon’s core theory embraces the lie that Democrats are tied to a global sex trafficking ring that also involves Satanism and cannibalism.

Democrats were expected to move forward later Thursday with the vote to remove her from her committee posts.

House Rules Committee Chairman Jim McGovern noted that while Greene expressed regret over her remarks and claimed to have had an epiphany that QAnon was false in 2018, many of her comments, including those endorsing violence against House Speaker Nancy Pelosi, were more recent.

“I did not hear an apology or denouncement for the insinuation that political opponents should be violently dealt with,” said McGovern, a Massachusetts Democrat. “It’s not ancient history. She continues to fund-raise off this stuff.”

The vote will force Greene’s Republican colleagues to go on the record to defend or rebuke her after she has drawn bipartisan condemnation over her past remarks. The political dilemma for Republicans underscores the tension that has riven the party over its future since Donald Trump lost the White House.

Democrats gave Republicans an ultimatum this week: Strip Greene of her committee assignments, or they would. Bipartisan pressure built after Senate Minority Leader Mitch McConnell, R-Ky., called Greene’s “loony lies” a “cancer” for the party.

But House Minority Leader Kevin McCarthy, R-Calif., ruled out taking action. Instead, he accused Democrats of a “partisan power grab” for targeting Greene.

Pelosi told reporters Thursday that she was “profoundly concerned" by Republicans’ "acceptance of an extreme conspiracy theorist.”

“If any of our members threatened the safety of other members, we’d be the first ones to take them off a committee," Pelosi, D-Calif., said hours before the planned vote.

A few Republicans probably will side with Democrats and many have denounced Greene’s past remarks. But some warn that the Democratic majority is setting a bad precedent by meddling with Greene’s committee assignments, a process that the parties have long controlled.

McCarthy’s decision to back Greene comes when the GOP has been ideologically adrift after Trump’s loss, struggling over whether to embrace his norm-busting divisiveness or the party’s more traditional, policy-oriented conservative values.

House GOP keeps Cheney as No. 3 leader, stands by Greene

House Republicans blocked an effort Wednesday by conservative hard-liners to oust their No. 3 leader, Rep. Liz Cheney, R-Wyo. The daughter of former Vice President Dick Cheney had enraged Trump supporters by voting to impeach him over the riot at the U.S. Capitol.

In sticking by both women, McCarthy was attempting to placate both traditional conservatives and populists, like Greene, who emulate Trump. The moves were typical of McCarthy’s preference to avoid ruffling feathers as he charts his hoped-for path to becoming House speaker some day.

“You know what that’s going to mean?” he mused to reporters. “Two years from now, we’re going to win the majority. That’s because this conference is more united."

Green has made a wide range of racist remarks, while breathing life into conspiracy theories. Many of them were online and recently deleted after the liberal group Media Matters unearthed them.

Greene once said Black people “are held slaves to the Democratic Party" and suggested that the Parkland, Florida, school shooting was staged to disguise the perpetrators — a so-called false flag operation.

She was seen in an online video harassing Parkland survivor David Hogg at the U.S. Capitol, accusing him of “trying to take away my Second Amendment rights.”

“He has nothing to say because he’s paid to do this,” Greene said after Hogg ignored her. “He’s a coward. He can’t say one word.”

She made similar remarks after a gunman opened fire from a Las Vegas hotel room in 2017, killing 58 people at an outdoor music festival, which she suggested was a secret plot to build support for gun control legislation.

“I don’t believe (gunman Stephen Paddock) pulled this off all by himself, and I know most of you don’t either,” Greene said in a video. “What’s the best way to control the people? You have to take away their guns.”

In 2018, she speculated in a Facebook post that a Jewish-owned financial firm may have been involved in a plot to spark California wildfires. She suggested the motive could have been to fast-track a high-speed rail project favored by then-Gov. Jerry Brown, using “lasers or blue beams of light” fired from space.

“There are too many coincidences to ignore,” she wrote.

Greene once called Pelosi a “traitor" who was guilty of “treason,” a "crime punishable by death." She also “liked” a Facebook post where a commenter called for “a bullet to the head” of Pelosi.

The conspiracy theories Greene has embraced came up during the closed Republican caucus meeting on Wednesday. Some said Greene apologized to her colleagues, though there were conflicting, vague versions of exactly what she’d said.

That’s at odds with recent statements Greene has made on Twitter, where she has vowed to never back down or apologize and labeled her critics traitors, while using the Democratic push to punish her to raise money for her campaign.

McCarthy condemned Greene’s past endorsements of conspiracy theories — after weeks of saying little critical of her — and said the first-term congresswoman had recognized in a private conversation that she must meet “a higher standard” as a lawmaker.

It’s unusual for party leaders to strip lawmakers of committee assignments, which can help them address their districts’ needs, raise campaign contributions and shape legislation.

In 2019, House GOP leaders removed Rep. Steve King, R-Iowa, who had a history of racist comments, from the Agriculture and Judiciary panels after he was quoted as wondering when “white supremacist” became an offensive term. He lost the Republican primary for his seat in 2020 and is out of Congress after serving nine terms.