Former Vice President Walter Mondale, one of the architects of Minnesota’s liberal tradition, has died, his family announced Monday. He was 93.

Along with Hubert Humphrey in the 1960s, Mondale put Minnesota on the map as a reliably blue state.

Mondale started his career in Washington in 1964, when he was appointed to the Senate to replace Humphrey, who had resigned to become vice president. Mondale was elected to a full six-year term with about 54% of the vote in 1966, although Democrats lost the governorship and suffered other election setbacks. In 1972, Mondale won another Senate term with nearly 57% of the vote.

In 1976, he was elected as President Jimmy Carter’s vice president — a Southern governor nicknamed “Grits” to go along with Mondale’s nickname of “Fritz.” The duo lost their reelection bid to Ronald Reagan and George H.W. Bush in 1980.

In a statement Monday night, Carter said he considered Mondale “the best vice president in our country’s history.” He added: “Fritz Mondale provided us all with a model for public service and private behavior.” 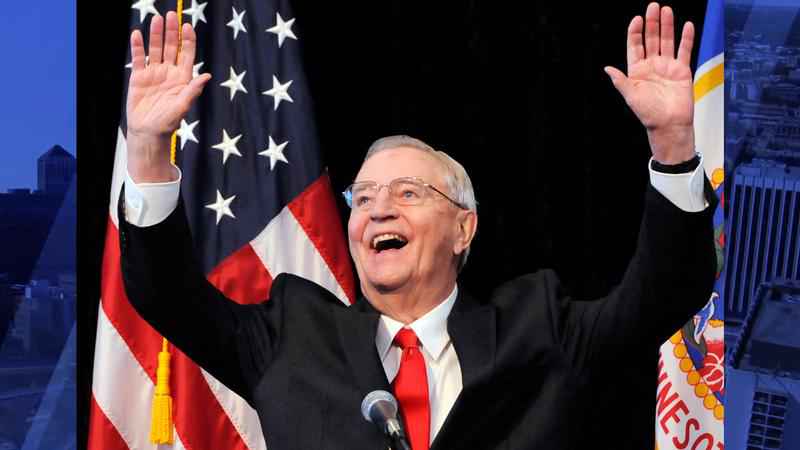 In an Oct. 30, 2012, file photo, former Vice President Walter Mondale, a former Minnesota senator, gestures while speaking at a Students for Obama rally at the University of Minnesota's McNamara Alumni Center in Minneapolis. Mondale, a liberal icon who lost the most lopsided presidential election after bluntly telling voters to expect a tax increase if he won, died Monday, April 19, 2021. He was 93.[AP/Jim Mone]

In 1984, Mondale was the Democratic presidential nominee, along with running mate Geraldine Ferraro, the first woman. Reagan won every state except Minnesota.

Mondale retired from running races and started backing other Minnesota political figures, standing behind Paul Wellstone as he was sworn into office as a U.S. senator in 1991.

When a plane crash killed Wellstone on Oct. 25, 2002, Mondale stepped in to take his place on the ballot. Mondale’s five-day campaign wasn’t enough to win against Republican Norm Coleman, who was elected by a margin of fewer than 50,000 votes.

Mondale was born Jan. 5, 1928, in the southern Minnesota town of Ceylon to parents Theodore and Claribel Mondale.

Gov. Tim Walz tweeted about the passing of the Minnesota politician, calling him “a dear friend and mentor.”

“He believed that the greatness of America is found in the everyday men and women who build our nation, do its work, and defend its freedoms. And he fought tirelessly for those values until the very end of his life, imploring each of us through his example to continue the fight,” Walz said on social media.

Walter Mondale believed in and worked to create a nation with a heart, a soul, and a conscience.

Walz ordered all Minnesota flags to be flown at half-staff at all state buildings until Mondale’s burial.