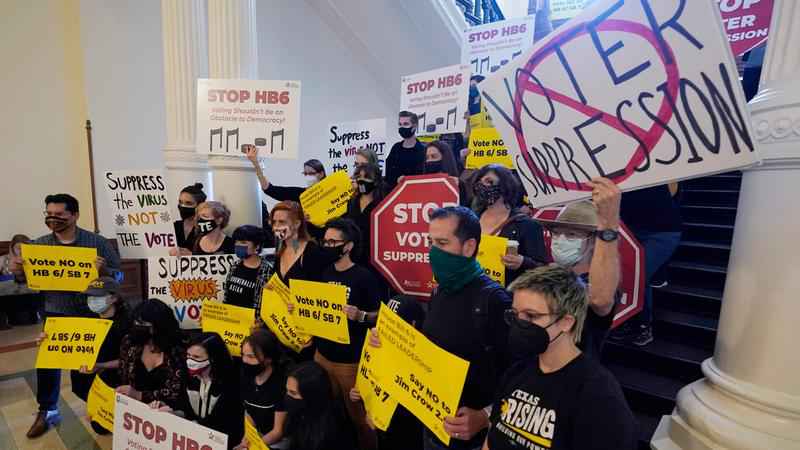 In this May 6, 2021, file photo, a group opposing new voter legislation gather outside the House Chamber at the Texas Capitol in Austin, Texas. In 2020, election officials tried to make voting easier and safer amid a global pandemic. Next time, they might get fined or face criminal charges.[AP/ Eric Gay]

In 2020, election officials tried to make voting easier and safer amid a global pandemic. Next time, they might get fined or face criminal charges.

Republicans are creating a new slate of punishments for the county officials who run elections, arguing they overstepped their authority when they expanded voter access during the coronavirus pandemic.

The new penalties, part of a nationwide Republican campaign to roll back access to the ballot, already have become law in Iowa, Georgia and Florida, and are making their way through statehouses in Texas and elsewhere. The GOP push comes after a presidential contest that saw record turnout and no widespread problems.

Election officials have responded with warnings of a chilling effect on those responsible for administering the vote and counting ballots, raising fears they could be penalized for minor mistakes, get caught up in partisan fights or even leave their jobs.

In Iowa, Republican Gov. Kim Reynolds drew heavy criticism for signing a broad voting bill in March that shortens hours at polling places, narrows the early voting period and imposes new restrictions on mail and absentee ballots. The law also bans sending unsolicited absentee ballot applications to voters, as some officials did before the 2020 election.

One provision is especially worrisome to Linn County Auditor Joel Miller: a fine of up to $10,000 for a "technical infraction" of election rules. Miller says the penalty could be imposed for unintentional mistakes like opening a polling place a few minutes late, and raises concerns about partisan enforcement.

"It’s a lot of moving parts and a lot of variables and people make mistakes, and now I’m liable for all those mistakes," he told The Associated Press. "The process could be likewise corrupted by the secretary of state arbitrarily administering the law in a very uneven manner, depending on whether you’re a Democratic county or a Republican county."

A similar bill signed into law Thursday by Florida Gov. Ron DeSantis, a Republican, could lead to $25,000 fines for election supervisors if a ballot drop box is accessible outside of early voting hours or is left unsupervised.

There have been more than 350 restrictive voting bills filed in 47 states this year, according to the Brennan Center for Justice, a public policy group that advocates for voter access. Many seek to place new rules around mail and early voting, methods used without issue in 2020, with some tacking on new penalties for election administrators.

There is universal agreement among experts that there was no widespread fraud or problems that compromised the results of the 2020 election. Still, it’s not unusual for lawmakers to reassess voting regulations after an election. The GOP push this year, based on President Donald Trump’s unfounded claims of a stolen election, has garnered intense scrutiny, including from big names in the business community who argue the legislation is discriminatory.

In 2020, election officials in Harris County, Texas, which includes the Democratic stronghold of Houston and is one of the most racially diverse in the nation, went further than anywhere else in the state to create new ways to vote. They opened 24-hour polling places and implemented drive-thru voting. They also tried to mail all voters unsolicited absentee ballot applications but were blocked by the Texas Supreme Court.

The county, where nearly half of the 5 million residents are Latino and 20% are Black, saw a record 1.7 million votes last year. Between 10,000 and 15,000 people cast ballots at 24-hour centers during times when polling places are normally closed. More than half of the roughly 127,000 people who voted at drive-thru centers were Black, Latino or Asian.

In response, Republicans in the GOP-controlled Legislature have pushed proposals to ban 24-hour and drive-thru voting centers, and make it a crime to send voters unsolicited absentee ballot materials.

"If you got rid of every election administrator you don’t like in your state, the desire for drive-thru voting, for mail ballot voting, for expanded hours is still there. We already made it happen," said Isabel Longoria, the election administrator of Harris County. "So you can either get with the times and proudly support these modern initiatives or you can be the person who stood in the way."

Georgia also has been in the spotlight over voting restrictions passed by the GOP-dominated Legislature and signed into law by Republican Gov. Brian Kemp in March.

The law includes limits on where ballot drop boxes can be placed and accessed. It also allows the Legislature to select the chair of the state election board, who has the power to intervene in county election offices and install a temporary superintendent, as well as hire and fire personnel, including election directors and poll officers.

Fulton County, which includes most of the Democratic stronghold of Atlanta, is one potential target, given frequent Republican criticism over long voting lines, problems processing absentee ballots and other issues. Georgia Secretary of State Brad Raffensperger, a Republican, has said the county has been "failing its voters for at least 25 years."

In response, Fulton County Chairman Robb Pitts issued a statement that said the county "has been unfairly targeted by those with a grudge against us."

"While Fulton County is the clear target, all 159 of Georgia’s counties will be impacted, and I urge those counties’ leaders to examine the bill, stand up and speak out — because tomorrow it could be them," he said.

The new penalties have at least some election officials talking about getting into different lines of work. Miller, the Linn County auditor, said some have been joking about switching career paths.

"Well, there’s been a couple of county treasurer jobs that became open recently," Miller said with a laugh, "and my peers were openly discussing whether or not they should apply to be appointed as treasurers because, you know, treasurers never get in trouble."