The Minnesota Legislature convened Tuesday with the COVID-19 pandemic and a new two-year budget at the top of the agenda for a session that will be unlike any before.

Battle lines are already being drawn over the sweeping emergency powers that Democratic Gov. Tim Walz has used to command the state’s fight against the coronavirus, with Republicans trying to carve out a stronger voice for the Legislature in decisions about reopening schools and businesses.

The Capitol has remained mostly closed to the public since the pandemic began and has been fenced off since the unrest that followed the death of George Floyd in Minneapolis in May. Nearly all House meetings will be conducted online, while the Senate plans a hybrid of in-person and online hearings and floor sessions.

Most representatives were sworn in nine at a time via Zoom as the chambers got themselves organized on a mostly ceremonial opening day Tuesday. Twelve senators took their oaths remotely, one at a time, while the remainder took their oaths in the chamber. Several GOP senators did not wear masks on the floor. After a moment of silence for GOP Sen. Jerry Relph, of St. Cloud, who died of COVID-19 last month, Democratic Sen. Matt Klein, of Mendota Heights, a doctor who treats coronavirus patients at Hennepin Healthcare, said he would consider it “a sign of disrespect” if his colleagues continue to refuse to mask up.

House Democrats and Senate Republicans emerged from the November elections with slightly smaller majorities than they held in the 2019 and 2020 sessions, which means their leaders will face a harder job keeping their troops in line. A few Democrats split with their caucuses last year on unsuccessful votes to roll back the governor’s executive powers. 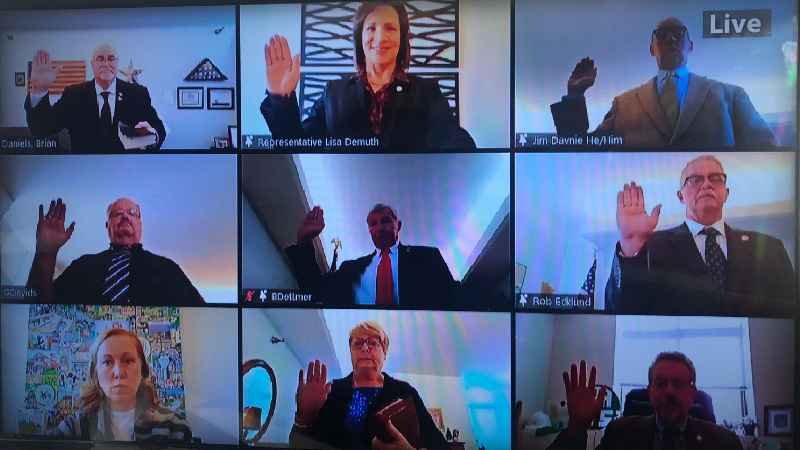 “This pandemic has laid bare the structural inequities in our political and economic systems,” Winkler said.

A sign of the times: Members of the Minnesota Legislature being sworn in remotely by MN Supreme Court Justice Paul Thissen. Thissen is a former MN Speaker of the House. The 2021 session is just underway and will be the most unusual in history. pic.twitter.com/XSULTjJgei

Democratic House Speaker Melissa Hortman, of Brooklyn Park, noted that all sides managed to agree on a budget and other difficult issues over the past two years.

“We will fight like hell for the principles that we stand for, and no doubt Senate Republicans will do the same,” Hortman said. “But in the end, I believe that we will compromise, and we will enact a budget that’s in the best interests of Minnesotans.”

GOP Senate Majority Leader Paul Gazelka, of Nisswa, listed redistricting and election integrity as focuses for Senate Republicans this session, in addition to passing a two-year budget he predicted will total “well over $40 billion.” He echoed Hortman’s sentiment that the divided chambers can reach an agreement and pass a budget, though he said his caucus will not agree to raising any taxes to get there.

“We do have a budget reserve that’s more than that shortfall, and it’s meant for rainy days, and we have other tools that we can use,” he said. “We’re telling folks we don’t need a gas tax, we don’t need to raise income or sales taxes, but it will be a challenge.”

Hortman said any changes to the governor’s pandemic executive orders will have to go through the committee process and be approved by both chambers. But she indicated that Democrats will need Republican support to dispense federal assistance for renters, so they would be open to changing to the governor’s eviction moratorium to make it easier for landlords to remove problem tenants. And she said they’ll take a comprehensive look at potential changes to the state law that gives the governor his emergency powers.

Gazelka said he doesn’t believe Walz needs emergency powers now that vaccines are being administered and the end of the pandemic is in sight. Though Walz is expected to announce the lifting of some restrictions on Wednesday, Senate Republicans will likely vote to remove the governor’s powers once again, he said.

“We want to work with him, we don’t want him to have power by himself to make all these decisions,” Gazelka said. “Ultimately, we just need to get the vaccines out to people as quickly as possible because once we do that, everyone can agree that it’s time for emergency powers to go away.”