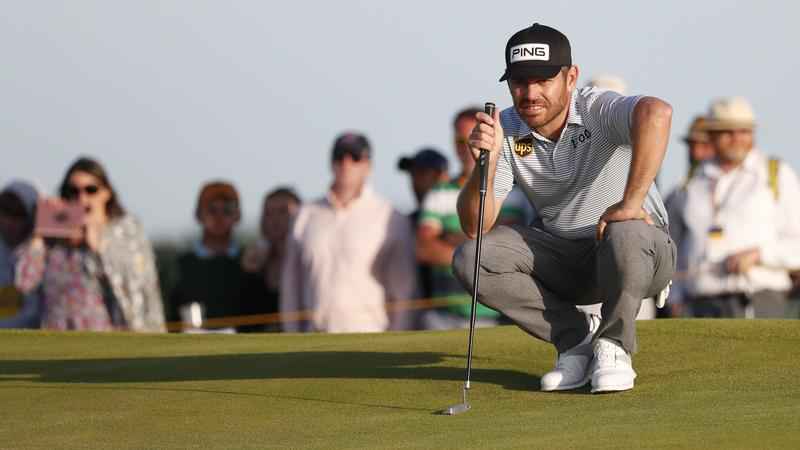 South Africa's Louis Oosthuizen looks at the line of his putt on the 17th green during the third round of the British Open Golf Championship at Royal St George's golf course.[AP/Peter Morrison]

Louis Oosthuizen is the 54-hole leader of the British Open after hanging on over the back nine at Royal St. George’s.

Oosthuizen made an 8-foot birdie on the 16th hole and a long two-putt par on the closing hole for a 69. That gives him a one-shot lead over Collin Morikawa going into the final round.

Jordan Spieth was tied for the lead until he hit a poor wedge into the 17th for bogey and then shockingly missed a 2-foot par putt on the 18th. He had to settle for a 69 and now is three shots behind.

Oosthuizen has been runner-up in the last two majors and will be trying to win his first major since the 2010 British Open at St. Andrews.

Morikawa was four shots behind when he walked off the 10th green. That’s right when Oosthuizen started getting scrappy with his swing. He dropped shots on the 11th and 13th holes. He failed to birdie the par-5 14th. But he made a great par save on the 15th.

Morikawa started poorly with two bogeys in the opening five holes. He was bogey-free the rest of the way and shot 68.

Eight players are separated by five shots. That includes U.S. Open champion Jon Rahm. He made a 15-foot par putt on the last hole for a 68 and was five behind.