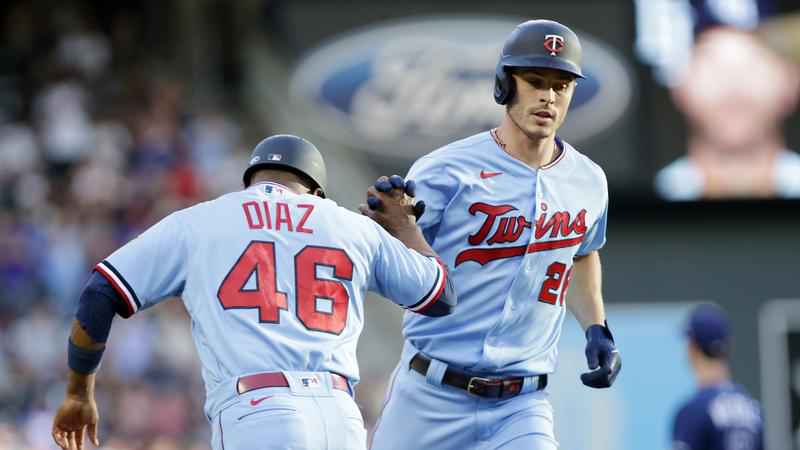 Minnesota Twins' Max Kepler (26) is congratulated by Minnesota Twins third base coach Tony Diaz (46) on his home run against the Tampa Bay Rays in the first inning of a baseball game.[AP/Andy Clayton-King]

Max Kepler, Brent Rooker and Ryan Jeffers also went deep for the Twins, who won for the third time in four games. Maeda (6-4) allowed three singles, struck out four and walked one.

“All the way around, it was a very nice night at the ballpark,” Twins manager Rocco Baldelli said. “We didn’t play our best game yesterday. We came out today and maybe played one of our best games of the year.”

Tampa Bay entered the game having scored at least eight runs in seven straight games on its road trip, just the third team to accomplish that feat in the modern era, according to STATS. It was shut out for the first time since July 17.

“I expected it to be a tough battle tonight but I think I was successfully keeping them off balance," Maeda said via a translator.

The slap-hitting Arraez connected during the Twins’ three-run third, skipping to first base on his second homer of the year.

Arraez said he told his wife before the game he thought he would homer.

“I’ve got to do something good,” he said. “When I hit the homer, I started thinking of my wife. We talked earlier. If we put something in our mind, we can do it.”

“It’s just not easy for him right now,” Rays manager Kevin Cash said. "It’s never easy, but he’s just getting hit around and hitters are making adjustments on him.”

Rooker made an inning-ending diving catch in left field in the second, robbing Joey Wendle.

“It stretched him to I think the edge of his range and the balls he could potentially get to,” Baldelli said. “But he was determined on that play.”

Prior to Saturday’s game, 24 players and coaches from the 1991 Minnesota Twins were honored in a ceremony at Target Field. That club beat the Atlanta Braves in seven games in the World Series.

Tom Kelly, who managed both the 1987 and 1991 World Series champions with the Twins, threw out the first pitch. He was delivered the ball by Jack Morris, who famously refused to give his manager the ball in his Game 7 performance in 1991.

“The importance of that group, in the community here, they are a highly thought-of group for so many reasons," Baldelli said.

The Twins placed right-hander Michael Pineda on the 10-day injured list with a mild oblique strain. They also recalled right-handed reliever Ralph Garza Jr. from Triple-A St. Paul. Garza made his Twins debut in the seventh.

Rays: Cash didn’t have much of an update on infielder Yandy Diaz, who left Friday’s game with a left hand injury. “He’s sore, but he’s going to get a lot of treatment today,” Cash said.

Twins: CF Byron Buxton (hand) worked out Saturday morning but will be away for a few days to attend to a family matter. Baldelli said the team will map out a plan for his rehab assignment when he returns early next week.

In Sunday’s series finale, LHP Charlie Barnes (0-2, 6.08 ERA) will make his third career start for the Twins. Tampa Bay will counter with RHP Luis Patiño (2-3, 4.64 ERA), who earned a no-decision in his last outing against Boston.