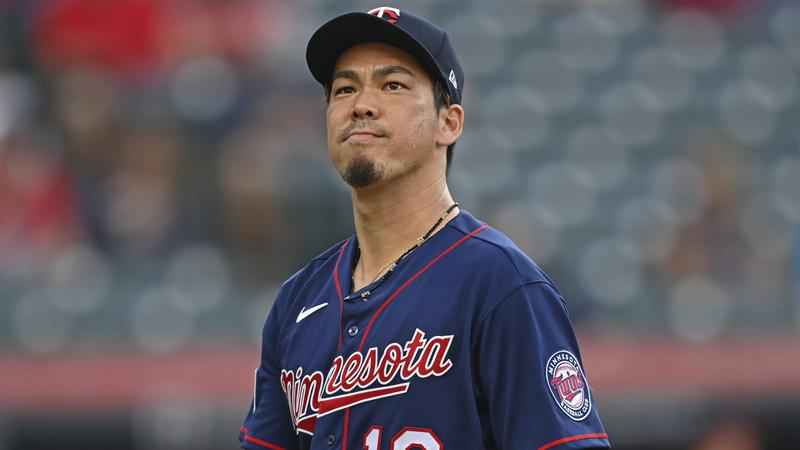 Minnesota Twins starting pitcher Kenta Maeda (18) walks to the dugout in the third inning of a baseball game against the Cleveland Indians, Tuesday, April 27, 2021, in Cleveland.[(AP Photo/David Dermer)]

Franmil Reyes homered twice, including a 452-foot drive that landed in the left-field bleachers about six rows in front of the scoreboard, and the Cleveland Indians beat the slumping Minnesota Twins 7-4 on Tuesday night.

Reyes broke a sixth-inning tie with his second homer off Kenta Maeda to give the Indians a 4-3 lead. Reyes led off the second with a majestic clout that sent fans in the bleachers scrambling and tied the game after Minnesota scored twice in the first.

José Ramírez drove in two runs, including a first-inning homer that helped Cleveland to a win over its AL Central rival for the second straight night.

The Twins have lost four straight and 13 of 15, falling to 7-15 this season. Byron Buxton homered with two outs in the eighth to chase Aaron Civale (4-0), but James Karinchak struck out Nelson Cruz and then worked the ninth for his second save.

Maeda (1-2) was charged with five runs, including three homers, in 5 2/3 innings. Jake Bauers’ RBI double off Caleb Thielbar in the sixth gave Cleveland a two-run lead.

Reyes, the Indians’ 6-foot-5, 265-pound designated hitter, has had a memorable homestand with two triples — the first of his career — and his first stolen base in the majors.

Cruz’s RBI triple and a single by Alex Kirilloff gave Minnesota a 2-0 lead in the first. Ramírez hit a solo homer in the bottom half before Reyes tied the game.

Ramírez was credited with a double when Kiriloff dropped his fly ball close to the line in left after a long run, giving Cleveland a 3-2 lead in the third. Willians Astudillo’s RBI single in the fourth tied it.

Buxton returned to the lineup and batted third after missing Monday’s game with a sore knee. He beat out a grounder to deep shortstop in the first and scored on Cruz’s hit that drifted into the right-field corner and bounced off the wall. Cruz lumbered into third with his first triple since June 24, 2018.

Kiriloff drove a hit off the wall in left, but was thrown out by Eddie Rosario trying for a double after Cruz scored.

Twins manager Rocco Baldelli said struggling reliever Alex Colomé, who gave up the game-winning home run to Jordan Luplow on Monday, will be moved out of the closer’s role for now. Colomé pitched the eighth Tuesday, hitting Josh Naylor on the right hand with a pitch and walking three, including César Hernández with the bases loaded.

Twins: OFs Max Kepler and Kyle Garlick have cleared COVID-19 protocols and could be activated this weekend when Minnesota opens a home series against Kansas City.

Twins LHP J.A. Happ (1-0) starts Wednesday for the first time since taking a no-hitter into the eighth inning Friday against Pittsburgh. LHP Logan Allen (1-3) goes for Cleveland in the series finale.