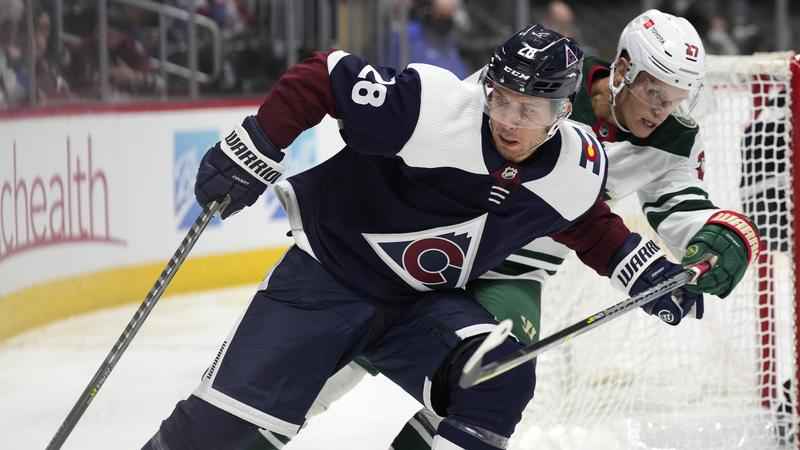 Landeskog’s second goal was an empty-netter at 17:48 of the third which went in off the post on a shot from near the red line.

Ryan Hartman scored his fourth goal of the season for the Wild. Cam Talbot had 27 saves.

Brandon Duhaime was in the box with a game misconduct penalty when Kadri’s slap shot found the net for a power-play goal that stretched Colorado’s advantage to two goals at 2:54 of the third.

Minnesota had evened the score at 1-1 on Hartman’s power-play score at 16:54 of the second, before the Avalanche regained the lead 40 seconds later. MacKinnon got hold of the puck along the boards on a pass from Landeskog before passing it back out between the circles to Johnson, whose wrist shot beat Talbot for his first of the season.

Landeskog opened the scoring at 13:03 of the first. Andre Burakovsky shot a cross-ice pass to Landeskog, who lifted the puck over the sprawled Talbot.

NOTES: Prior to the game, the Wild recalled defenseman Calen Addison and forward Adam Beckman from Iowa of the American Hockey League. Defenseman Jon Lizzote was reassigned to Iowa and forward Jordan Greenway was placed on injured reserve with a lower body injury. … Minnesota’s Rem Pitlick and Mats Zuccarello remained sidelined under COVID-19 protocols. … Avalanche right wing Mikko Rantanen missed a second straight game and remains day to day with a lower body injury. … Avalanche defenseman Cale Makar turned 23 on Saturday. … MacKinnon has an assist in each of his six games this season. … The Avalanche had killed nine straight power plays before Hartman’s goal with the man-advantage. … The division rivals played the first of their four games this season.