Senior catcher Sam Monk singled in the winning run in the bottom of the eighth inning to lift No. 2 Benilde-St. Margaret’s to a dramatic 4-3 victory over Mankato West in the Class AAA championship game of the Minnesota State High School League’s Prep Championship Series on Friday, June 17, 2022 at Target Field in downtown Minneapolis. It is the first state championship for the Red Knights (24-3), who end the season on a 10-game winning streak.

It was the first extra inning baseball championship game since 2016 when Springfield defeated Parkers Prairie, 4-2, in 11 innings for the Class A championship.

The eighth inning provided plenty of drama. It started with Mankato West in the top of the inning. With two outs and the bases empty, Mankato West senior right fielder Ryan Ploog singled. Senior Riley Bersaw who had started the game on the mound, but was now playing third base, fanned but the ball eluded the catcher for a wild pitch. Jace Liebl, a junior designated hitter, hit a slow roller that hit the third base bag for an infield single that loaded the bases. Senior catcher Luke Johnson then drilled a shot into right center field, but Benilde-St. Margaret’s junior center fielder Easton Breyfogle flagged it down to end the inning.

In the bottom of the inning, senior right fielder Tomas Lee singled with one out – the first runner to reach base off Mankato West sophomore pitcher Wilson Magers. That brought up Monk, a senior catcher who had struck out his previous two at-bats. Monk hit Magers’ first pitch off the left field wall to score Lee with the winning run to ignite the Red Knights’ celebration of their first baseball championship. 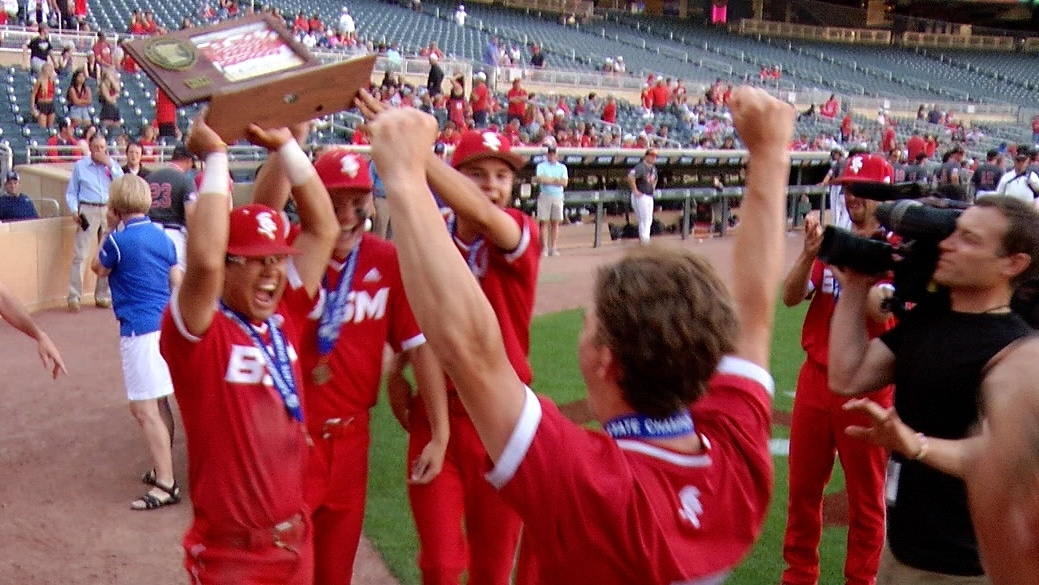 The Red Knights took an early 3-0 lead, garnering a run in the second inning on an RBI-single by sophomore third baseman Connor Armand, and picked up two more the next inning on senior first baseman Dan Porisch’s single.

Benilde-St. Margaret’s sophomore lefthander Caleb Koskie cruised through the first four innings, allowing just one hit and no runs. The Scarlets changed the direction of the game in the fifth. A strikeout that also had a wild pitch, a single, a balk, an RBI ground out and a perfect suicide squeeze bunt by senior left fielder Ryan Haley produced two runs. In the sixth, senior infielder Louis Magers singled. Senior second baseman Avery Stock dropped down a sacrifice bunt that was thrown away for an error, allowing Magers to advance to third base. A passed ball enabled Magers to score to tie the score at 3-all.

Koskie, the son of former Minnesota Twin Corey Koskie, persevered on the mound until the seventh when he gave way to senior righty Owen Omdahl, the eventual winning pitcher.

Sophomore Wilson Magers, who relieved Bersaw in the fifth inning, took the loss for the top-seeded Scarlets, who ended the season at 25-2. It was the school’s first appearance at the state tournament since 2003 and just its third trip ever to the baseball tournament. Benilde-St. Margaret’s, which was the AAA runner-up in 2019, was appearing for the fourth time in school history.