Jurors heard from Daunte Wright’s girlfriend, who was in the car with him on April 11; the driver of the vehicle Wright’s car hit after he was shot; that woman’s daughter; and the first Brooklyn Center police officer to respond to the crash Wright’s car was involved in after his shooting.

Alayna Albrecht-Payton said she and Wright met two or three weeks before his death and were dating, although they never made it official. In her emotional testimony, she explained what happened on April 11 and how "nervous and scared" both she and Wright were when he got pulled over. She admitted they’d smoked marijuana after waking up that morning but said they didn’t feel its effects and never smoked marijuana in the car that day. She also said there wasn’t any gun or weapon in the car.

Through tears, she said she didn’t remember much during the scuffle but after the gun fired, recalled the car taking off, crashing into another vehicle and Wright bleeding in the car. 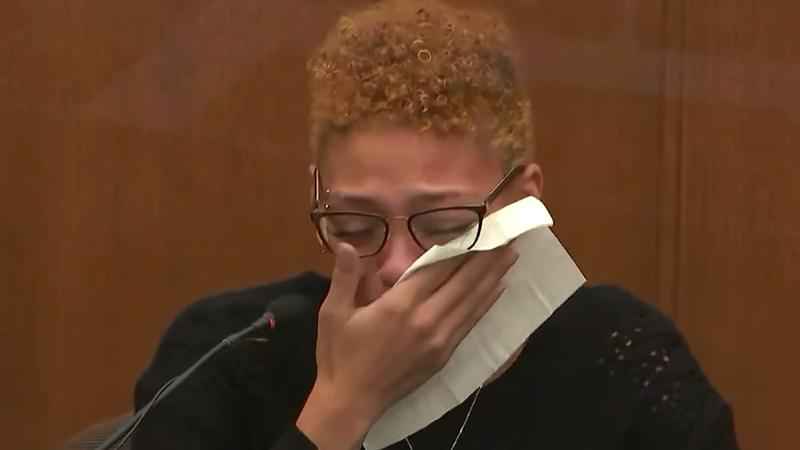 In this screen grab from video, Alayna Albrecht-Payton, a passenger in Daunte Wright's car during a traffic stop testifies as Hennepin County Judge Regina Chu presides over court Thursday, Dec. 9, 2021, in the trial of former Brooklyn Center police Officer Kim Potter at the Hennepin County Courthouse in Minneapolis, Minn. Potter is charged with first- and second-degree manslaughter in the April 11 shooting of Wright, a 20-year-old Black motorist, following a traffic stop in the Minneapolis suburb of Brooklyn Center.[Court TV, via AP, Pool]

Jurors also heard from Brooklyn Center police officer Alan Salvosa, who was not only the first officer at the scene of the crash involving Wright’s vehicle but actually witnessed the crash. A large chunk of Salvosa’s 70 minutes on the stand included his body camera and squad dash camera videos being played for jurors.

The officer explained he "was confused" about why he didn’t hear any information from Potter, Luckey and Sgt. Johnson when Wright’s vehicle fled. He said it "felt like forever" for other officers to arrive. But perhaps the most notable information from Salvosa was that it took nearly 10 minutes from the moment Wright’s vehicle stopped for officers to actually make contact with Wright and provide first aid.

Salvosa noted he followed his training and had no indication anyone in Wright’s vehicle was armed. He also didn’t know until after Wright was dead that he’d been shot by an officer.

"At that point, I didn’t know because I know that there were shots fired and that there was a crash. So there’s a lot of unknowns at that time," he said.

Jurors also heard from Champlin Police Officer Daniel Irish, who responded to the scene on April 11, Thursday afternoon and saw a lot of body camera video from Irish and Sommers. A paramedic and the North Memorial ambulance operation supervisor on April 11 also testified in the afternoon that they were originally told multiple people — possibly three — had been shot and struggled to get information quickly at the scene. The officers and paramedics also testified that they never found Wright’s pulse at the scene.

The woman who was driving the car Wright’s vehicle hit after the shooting also testified Thursday morning, noting her husband, who was in the front passenger’s seat that day, has had many health issues since the crash, which their daughter also confirmed. Additionally, a woman who lives kitty-corner to where Wright’s vehicle stopped, also discussed what she saw that day while providing her home’s security footage of the crash.

While the testimony in the afternoon may not have been compelling as the morning, there were still some fireworks in the afternoon. The defense repeatedly objected to the state introducing video or pictures that had already been shown at a different time, leading to several sidebars and an extra 15-minute break for jurors.

After jurors were dismissed for the day, the defense called out the state for not presenting any evidence of Potter’s guilt, which the state refuted as part of its theory that Potter’s actions caused harm to many people when she shot Wright. The defense then moved for a mistrial.

Judge Regina Chu quickly shot the motion for a mistrial down, saying, "Alright, we’re really getting ahead of ourselves now."

Court is set to reconvene at 10 a.m. — an hour later than normal — on Friday morning.