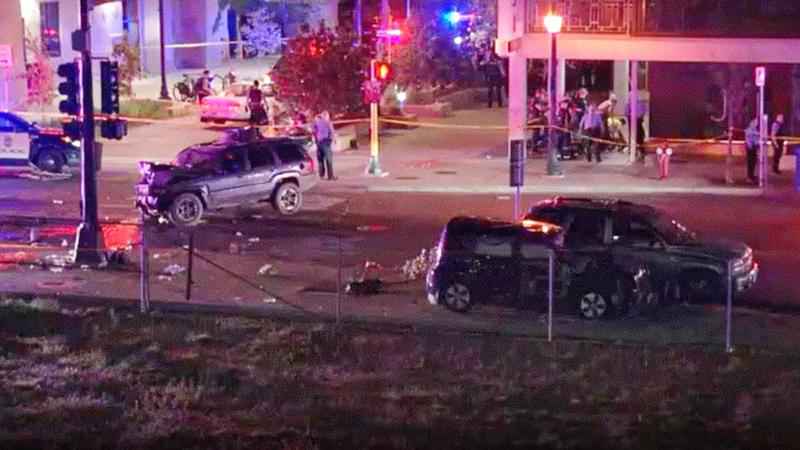 A vehicle drove into a group of protesters Sunday night in the Uptown neighborhood of Minneapolis, causing one person to die and hurting another.

According to the Minneapolis Police Department, at 11:39 p.m., police were monitoring a protest in the area of West Lake Street and Girard Avenue South when they observed, on camera, a vehicle traveling eastbound on Lake Street and driving into a group of protesters.

Additional squads were called to the scene, as were several ambulances.

Police said protesters pulled the suspect from the vehicle and began to strike the driver, according to witness reports. Officers arrived and took the driver into custody.

The incident resulted in two protesters hurt and they were transported to Hennepin County Medical Center via ambulance. One of those injured was in critical condition. Minneapolis Police Spokesman John Elder later said the person critically hurt, a woman, died at the hospital.

Officers transported the suspect to an area hospital for his injuries as well.

All people involved in the crash are believed to be adults, said police.

The preliminary investigation indicates that the use of drugs or alcohol by the driver may be a contributing factor in this crash.

The medical examiner will release the identity of the victim, along with the nature and cause of death in the days to come.

Minneapolis City Council President Lisa Bender issued a statement about the crash, which read, in part:

I woke up to the very troubling news that a person was killed in Uptown last night when a driver crashed into people gathered in protest. Any death in our city is a tragedy and as we wait for more information I hope we can all come together to support the victim’s family and friends who have suffered this sudden loss of life.

Based on the information available, it does not seem possible at this time to say if the crash was accidental or intentional. MPD is investigating and details about how to contact MPD with information is (above). This stretch of road, like many in our community, is one of the highest crash corridors in the city.

After more than a year of pandemic isolation and emotional and economic stress, emotions and anger are very high in our city. I receive many supportive notes and I receive many angry calls and emails, often violent. We do our best to respond with an open mind. From this vantage point I can tell you that many neighbors have very divergent views and experiences from one another. I hope that as neighbors you can find a way to listen to each other, it will be necessary for our community to be able to move forward in the days, weeks and years to come.