Suter told sports director Joe Schmit in a phone conversation that he received a call from Guerin and owner Craig Leipold this morning. He said he was shocked, when told of management’s plans. Suter’s plan was to fulfill all 13 years of his contract and help the Wild win a Stanley Cup.

"Zach and Ryan have been an integral part of the Wild’s success over the past nine years and we’ll always be grateful for their many contributions," Guerin said. "There were numerous factors that entered into the difficult decision to buy out their contracts, but primarily these moves are a continuation of the transformation of our roster aimed at the eventual goal of winning a Stanley Cup."

The move allows defenseman Matt Dumba to be protected in the upcoming expansion draft, according to a source. The move also frees up money while the salary cap is stagnant. 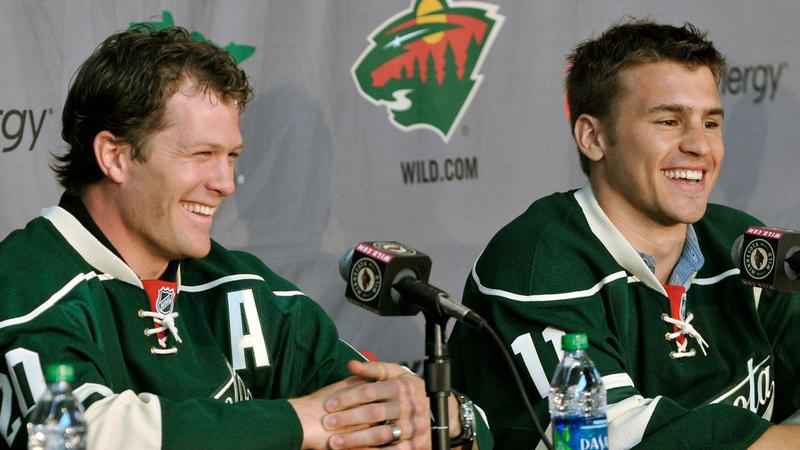 In this July 9, 2012, file photo, Minnesota Wild NHL hockey players Ryan Suter, left, and Zach Parise are introduced during a news conference in St. Paul, Minn. After signing with Minnesota together, Zach Parise and Ryan Suter are being bought out together. The Wild announced Tuesday, July 13, 2021, that the team is buying out the final four years of each player's contract, a stunning move early in the NHL offseason.[AP Photo/Jim Mone, File]

Both players will become unrestricted free agents, eligible to sign with any team in the NHL, except Minnesota.

Parise and Suter were signed through 2025 at matching salary cap hits of $7.538 million each year. The buyouts save over $10 million next season, but extend dead money on the cap through 2029.

Parise recorded 400 points (199-201=400) in 558 regular season games with the Wild and added 34 points (14-20=34) in 40 Stanley Cup Playoff contests. He is the franchise leader in power-play goals, ranks second in game-winning goals and shots on goal and third in scoring and goals. Parise is also the franchise leader in scoring, goals, power-play goals and assists in the playoffs. He owns 810 points (393-417=810) in 1,060 career NHL games with New Jersey and Minnesota.

This is a developing story. KSTP is working on confirming more information as it comes in. Be sure to refresh to your page for the latest information.