Why Minnesotans still talk about the great Halloween blizzard of 1991, 30 years later

Halloween is Sunday, and the forecast for trick-or-treating is cool but dry. That’s a lot better than what happened on Halloween night 30 years ago in Minnesota — known as the great Halloween blizzard.

On the morning of Thursday, Oct. 31, 1991, the forecast called for flurries. But that night, Mother Nature played a trick on us.

It started with light snow that evening and ended days later as a record-setting winter storm that has become part of Halloween folklore in Minnesota.

"What a whopper, it was unbelievable," said Joe Caffrey, KSTP’s director of photography. "It came out of nowhere. Everyone was talking about Halloween and this thing whacked us."

Caffrey took shot video that night while trick-or-treating with his kids in 1991. 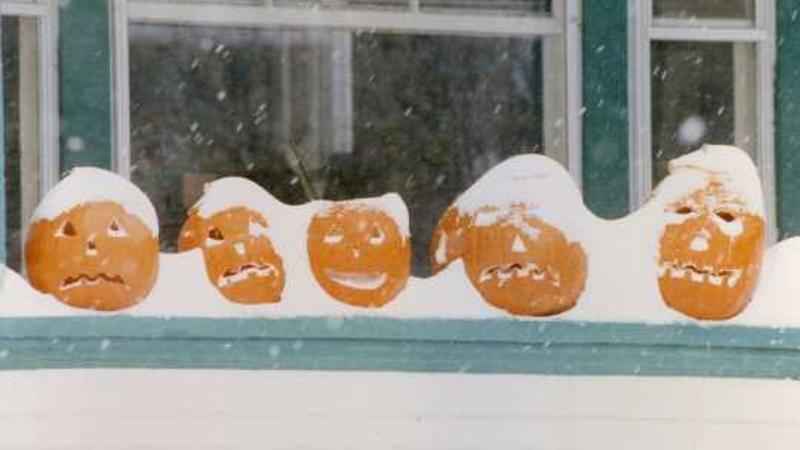 "And they went door to door," he said. "It was a wet snow and we were soaking wet. But it was just interesting, you know, Halloween? Why is it snowing this hard? And it just blew us away."

KSTP News Operations Manager Chris Meltvedt has seen it all in his 48 years at 5 EYEWITNESS NEWS. But the ’91 Halloween blizzard stands out.

He was trick-or-treating with his daughter and got concerned about the rapidly changing weather conditions.

"So I took her home, dropped her off with my wife, jumped in the car, came to work, and spent the next three days here," Meltvedt said.

The KSTP newsroom had its hands full telling the story of the blizzard.

"It just made it so difficult to get anywhere," Meltvedt said. "It had kind of rained for a while and that had frozen, so they couldn’t really plow it off. So, after a while once they did, all you had was the streets covered with ice, frozen, it was like driving on railroad tracks."

"I remember my first forecast for that storm was about 1-3 inches of snow and it just kept on getting heavier," Dahl recalls. "Well, it snowed like crazy and, of course, the night of Halloween it had snowed 8 inches before midnight. So we got 8 inches the first night and then we got 16 inches the next day. We ended up with 28.4 inches, the most the Twin Cities has ever had from a single storm."

According to Clair, that snowstorm was influenced by another historic storm: a huge nor’easter that hit New England at the same time. It became known as the "Perfect Storm" and there was a book and a movie made about it.

"Not that the Perfect Storm off the coast of New England created the storm we saw, but it did alter upper-level wind flow in a way that was favorable for us to tap into gulf moisture, which is required to see the sort of snow totals we saw," Clair said. "You’re looking at 36.9 inches of snow that fell toward Duluth and 28 inches for the metro area. Southeastern Minnesota had 4-8 inches and they saw 1-3 inches of ice."

KSTP Producer Sarah Peterson looks back fondly at the Halloween blizzard. She was 9 years old in 1991.

"You know, it’s one of those things that if you’re a Minnesotan and you lived through it, like, you have to talk about it, we all talk about it," she said.

Home video taken by Peterson’s mother shows Sarah dressed as a pirate and covered in snow.

"We got lots of people just dumping out their stash of candy into our buckets. We only had to go to a few houses and then I couldn’t even carry it, there was so much."

School was canceled the next day.

"It was like my first snow day that I really remember," Peterson added. "It was like it was the most magical days of our lives. We got huge amounts of candy and then we didn’t have to go to school. So it was just fantastic!"

And that is the story of the great Halloween blizzard of 1991.