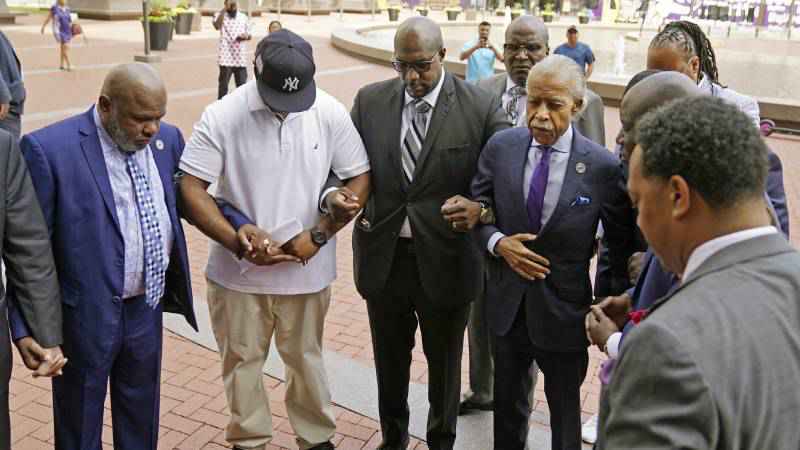 The Rev. Al Sharpton, right, with hand on coat, along with family members of George Floyd leads a prayer before entering the Hennepin County Government Center for the sentencing of former Minneapolis police officer Derek Chauvin, Friday, June 25, 2021, in Minneapolis, for the May 2020 death of George Floyd during an arrest in Minneapolis.[AP Photo/Jim Mone]

Some of George Floyd’s family members on Friday called Derek Chauvin’s 22 1/2-year sentence for murder in his death insufficient, while others expressed optimism that it would be an impetus for change.

One of Floyd’s brothers, Rodney Floyd, called the sentence a "slap on the wrist."

"We’ve suffered a life sentence for not having him in our life, and that hurts me to death," he said.

Another brother, Terrence Floyd, said he was "a little leery about the sentencing" until he had a dream in which his father appeared.

"I knew my father was saying, ‘You’re good. he’s good. keep doing what you’re doing. For me, for your brother, for your name,’" he said. "We’re Floyd strong and we’re gonna stay strong."

"When you think about George being murdered, in cold blood with a knee on his neck for 9 minutes and 29 seconds execution style in broad daylight, 22 and a half years is not enough," Williams said.

"We were served a life sentence. We can’t get George back."