Even if a Russian invasion of Ukraine doesn’t happen in the next few days, the crisis is reaching a critical inflection point with European stability and the future of East-West relations hanging in the balance.

A convergence of events over the coming week could determine whether the stalemate is resolved peacefully or Europe is at war. At stake are Europe’s post-Cold War security architecture and long-agreed limits on the deployment of conventional military and nuclear forces there.

“This next 10 days or so will be critical,” said Ian Kelly, a retired career diplomat and former U.S. ambassador to Georgia who now teaches international relations at Northwestern University.

The Biden administration on Friday said an invasion could happen at any moment, with a possible target date of Wednesday, according to intelligence picked up by the United States, and Washington was evacuating almost all of its embassy staff in Kyiv, Ukraine’s capital.

A phone call between President Joe Biden and Russian leader Vladimir Putin on Saturday did nothing to ease tensions. Biden and Ukraine’s president, Volodymyr Zelenskyy, spoke on Sunday.

Even before the latest U.S. warnings and diplomatic moves, analysts saw this as a critical week for the future of Ukraine. 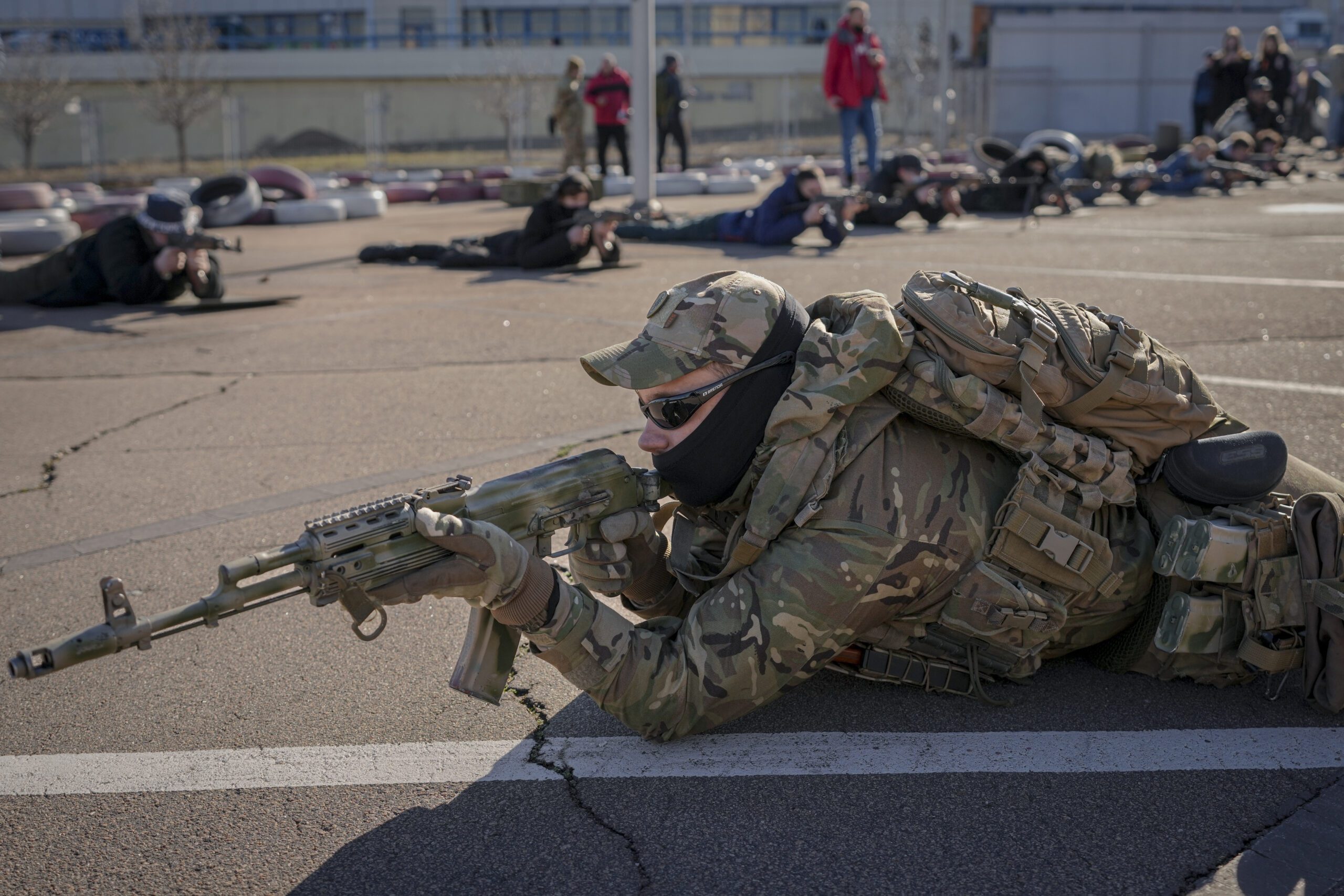 A member of the Special Forces Unit Azov, of Ukraine's National Guard, dem onstrates a shooting position during a basic combat training for civilians in Mariupol, Donetsk region, eastern Ukraine, Sunday, Feb. 13, 2022. The United States are evacuating almost all of the staff from its embassy in Kyiv as Western intelligence officials warn that a Russian invasion of Ukraine is increasingly imminent.(AP Photo/Vadim Ghirda)

“Russia and the United States are approaching a peak of the conflict of their interests regarding a future shape of the European order,” Timofei Bordachev, said head of the Center for European Research at Moscow’s Higher School of Economics. “The parties may take action against each other that will go much farther than what was considered admissible quite recently,” he said in a recent analysis.

In the week ahead, Washington and NATO are expecting Moscow’s formal response after they rejected its main security demands, and major Russian military drills in Belarus, conducted as part of a deployment near Ukraine, are to end. The fate of the Russian troops now in Belarus will be key to judging the Kremlin’s intentions.

At the same time, the Winter Olympics in China, often cited as a potential deterrent to immediate Russian action, will conclude Feb. 20. Although U.S. officials have said they believe an invasion could take place before then, the date is still considered important.

And an important international security conference is taking place in Munich next weekend, with Vice President Kamala Harris, Secretary of State Antony Blinken and top European officials planning to attend.

Putin has warned the West that he will not back down on his demand to keep Ukraine out of NATO. While Ukraine has long aspired to join, the alliance is not about to offer an invitation.

Still, he contends that if Ukraine becomes a member and tries to use force to reclaim the Crimean Peninsula annexed by Moscow in 2014, it would draw Russia and NATO into a conflict.

His foreign minister, Sergey Lavrov, has asked Western nations to explain how they interpret the principle of the “indivisibility of security” enshrined in international agreements they signed. The Russian Foreign Ministry said on Friday that it would not accept a collective response from the European Union and NATO, insisting on an individual response from each country.

Seeking to counter NATO’s argument that every nation is free to choose alliances, Moscow has charged that NATO violated the principle and jeopardized Russia’s security by expanding eastward.

“Russia’s bold demands and equally blunt U.S. rejection of them have pushed the international agenda toward the confrontation more than ever since the height of the Cold War,” Bordachev said.

He argued that closer relations with China have strengthened Moscow’s hand. “Whatever goals Russia could pursue now, it can plan its future in conditions of a full rupture of ties with the West,” Bordachev said.

Russian officials have emphasized that negotiating a settlement over Ukraine depends squarely on the United States and that Western allies just march to Washington’s orders.

In the past, Russia had sought to build close contacts with France and Germany in the hope that friendly ties with Europe’s biggest economies would help offset the U.S. pressure. But those ties were strained by the poisoning in 2020 of Russian opposition leader Alexei Navalny, who spent five months in Germany convalescing from what he described as a nerve agent attack he blamed on the Kremlin. Russia has denied its involvement.

More recently, Russian officials have criticized the position of France and Germany in the deadlocked peace talks on eastern Ukraine, holding them responsible for the failure to persuade Ukrainian authorities to grant broad self-rule to the Russia-backed separatist region, as required by a 2015 agreement.

In a break with diplomatic rules, the Russian Foreign Ministry last fall published confidential letters that Lavrov exchanged with his French and German counterparts in a bid to prove their failure to help make progress in talks.

Speaking after the latest fruitless round of those talks, Kremlin representative Dmitry Kozak bemoaned the failure by French and German envoys to persuade Ukraine to commit to a dialogue with the separatists, as the agreement stipulated.

Despite the tensions with both Paris and Berlin, Putin spent more than five hours talking to French President Emmanuel Macron last Monday and will host German Chancellor Olaf Scholz on Tuesday. Putin said he was grateful to Macron for trying to help negotiate a way to ease the tensions and said they would talk again.

Moscow also just reopened a window for diplomatic contacts with Britain, hosting the foreign and defense secretaries for the first round of talks since ties were ruptured by the 2018 poisoning in Britain of former spy Sergei Skripal and his daughter.